Since the Whitepebble Research Institute derives a full 40% of its income from religious commissions, it behooves them to keep abreast of all recent developments in the field. Venues in which one may encounter rising talents, new ideas, and the latest research papers are therefore most desirable. One such avenue is the Judge First - Ask Questions Later religious conference, held annually in diverse locations. It is, for sure, a must-attend event.

True, Tom Sheepandgoats, the Whitepebble representative has not attended for years, ever since they awarded top prize to that schlocky rhyme about walking with Jesus, in which two footsteps are seen in the sand, that of the life-traveler and Jesus. But in some places there is just one set of footprints, and so the life-traveler accuses Jesus of leaving him….always during tough periods of his life…..but Jesus answers that, no, I did not abandon you…..during those times I carried you.

Not a dry eye or nose could be seen among the blubbering judges, but Whitepebble vowed in disgust not to return, since it seemed to him that the judges were turning the power of the gospel into so much sentimental slop.

This year, however, cash prizes were offered for original papers….always a sufficient motivation for Whitepebble to reexamine his principles. Moreover, with, not one, but two worthy entries….the Gospel of Howard, and Acts of the Pioneers……chances of snagging some of that dough seemed good.

This year’s conference was held at Martha’s Vineyard, 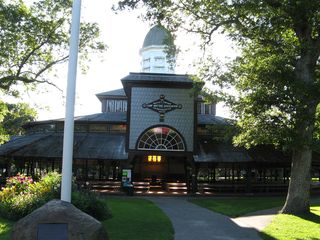 at the  Campground tabernacle, between sessions of other events. 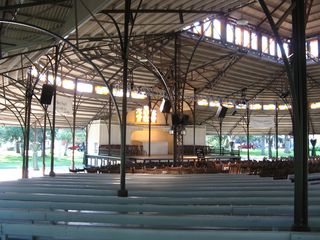 Delegates arrived in style from far and wide. Unfortunately, the attached photograph turned out to be not conference delegates, as was initially reported, but merely local residents, who were nonetheless thrilled to host such a prestigious event in their hometown or ought to have been. 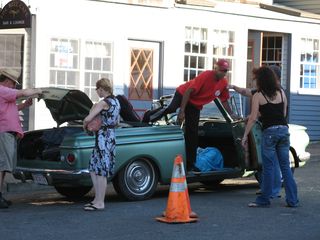 Martha, at left, herself met us all at the gate to lay down the law:

no carousing, no womanizing, no dancing, no card playing, no coveting, no bearing false witness. No using informal pronouns….thees and thous will do nicely.

It was a truly thrilling event. Competition for top prize in pure theology was intense. In the end, the winner ventured outside the traditional realm of theology, into chemistry, to prove a point that theology alone has never been able to answer definitively. By ingenious reasoning, it was proved that hell is not endothermic, as had long been supposed, but exothermic……that is, it absorbs heat over time, rather than shedding it. Whitepebble Institute's two entries both received honorable mention, so Whitepebble wasn’t too sore. Moreover, he was so impressed with the new research on hell that he abandoned his characteristic frugality and was heard to vow…..we have to get that kid on our staff…I don’t care what it costs, as long as it’s not too much!

Tom Irregardless and Me           No Fake News but Plenty of Hogwash