Ever since I was a kid, Durand Eastman beach has been closed. With much hoopla, the new administration vowed to open it. Opening day came and their first action was to close it. The bacteria count was too high.

Really, for 40 years you would never  had known the beach was closed. Come warm weather, swimmers flocked to it, almost as much as to the open beach two miles down the road. But every year, a child or two would drown, and the following chain of events invariably ensued:

First would come the tragic story of the drowning itself. A day or two later, somber "I told you so" scoldings from the newspaper, coupled with dismay that people still, even in the face of such tragedy, continue to play Russian Roulette with their very lives, swimming where there are no lifeguards! A few days later, some old codger or two would write in to say that he had swum at the beach for 50 years, same as his parents and grandparents. Furthermore, his children and grandchildren would also swim at the beach, and it was up to parents to watch their own kids, in which case tragedies would not happen.

These coots notwithstanding, city officials, as mentioned, coughed up the dough to hire lifeguards and build high chairs for them. They roped off an area, kicked out dogs, boats and floats, banned horseplay, splashing, chicken fights, snorkels and masks. Opening day finally came, after the bacteria had subsided,

While lifeguards badgered, cajoled, and nagged their charges, in the name of Safety, they were indulgent with those crazies, quite a few of them actually, who chose to swim outside the supervised area, leaving them unmolested for the time being. You don’t change 40 years of risk taking behavior in one day.

If it saves one life, it’s worth it, goes the slogan. But I will miss the literal horseplay.

They came from the stables across the street, clip-clopping straight into the water. You could tell straight off they weren’t people, because they didn’t dip their hooves in and take forever getting used to the water. No, they barreled right in, up to their shoulders, and frolicked around, having a good ol time. Of course, there were people with them, their handlers, and getting them in proved easier than getting them out. One horse got spooked at the mini-breakers hitting the shore, and he would not cross them. His handler tried and tried to coax him, but he would not do it. He might still be there, had he not finally sashayed around the wave, eying it warily all the time, oblivious that he was sidestepping through other breakers while making his escape.

They’re not all as smart as Mr. Ed, and from now on, they don’t swim at the open beach. 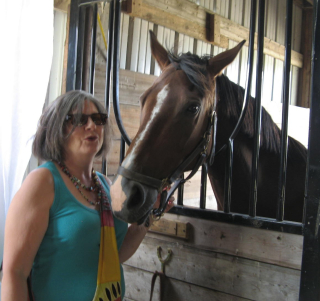 Tom Irregardless and Me   No Fake News But Plenty of Hogwash

I need a handler for my children, so I can take them to the beach and not worry. Here in Canada, I have never seen a lifeguard outside of a pool. Probably because most of our beaches are wilderness type places.