Home Archives Profile Subscribe
Elliot Spitzer and the Garbage Plate
Don't Worry, I'm in Charge and What About 911?

No, Virginia, Douse the Firecrackers

Virginia O’Hanlon asked her Dad if there really was a Santa Claus, and Dad wasn‘t sure he wanted to lie to his own child. So he did what parents have done since the beginning of time when they’re stuck. He passed the buck.

Why don’t you write the newspaper, he advised. If they say it’s true, then it is.

"Dear Editor--I am 8 years old.
"Some of my little friends say there is no Santa Claus.
"Papa says, 'If you see it in The Sun, it's so.'
"Please tell me the truth, is there a Santa Claus?
Virginia O'Hanlon
115 West Ninety-fifth Street

Probably, Virginia’s old man was hoping the paper would do what he was too chicken to do….tell his daughter the truth. Instead, they cooked up some sentimental answer that folks gush over to this day.

But sometimes you have no choice but to pass the buck. Like when my own son started pestering me about fireworks, for example, harassing me day and night. Do you think I could persuade my own child that fireworks were not legal in New York State? Not just dynamite, but also cherry bombs and even ladyfingers. They are illegal. You can’t blow them off in New York. Yes, they are legal in some states, but New York is not one of them. Tired of arguing with a boy who showed every sign of becoming just as pigheaded as the old man, I sought a way to pass the buck.

Talk to a cop! What a brilliant idea! I drove to the area police station. Were fireworks legal in New York State? No, they were not. What about ladyfingers? No they were not. What about on holidays and special events? No, that made no difference! What about…..LOOK, said the cop, you got a listening problem?! NO means NO.!! Now if you want to break THE LAW, go right ahead, but we’ll be coming after you!! All that was lacking was for him to draw his gun!

Elated, I skipped home to grab my son and return. Yeah! Tell the boy what you just told me! Scare the everlovin daylights out of him!

But Joe Friday wasn’t there!! Instead, it was jolly Officer O’Malahan! Well….he patted my boy on the head, with a twinkle in his eye, just be careful, and don’t set them off too much!!

Thanks a lot, copper!!! If this kid grows up to be a pirate, I’ll know who to blame! 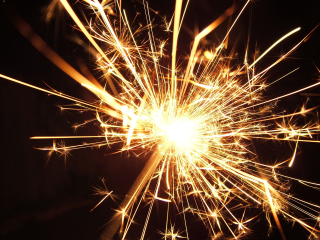