I once worked with a girl named Casey who positively loved science fiction. In the context of other things, I mentioned the film I, Robot.

Oh, that was terrible! she said.

But as we kept talking, it turned out she had never seen it. Um...Casey, how do know it's terrible if you've never seen it? I asked. The answer was that she was a purist. She knew the movie did not follow Isaac Asimov's storyline, and that was enough for her!

For an Asimov purist, the movie would indeed be blasphemy. Asimov, who wrote almost all the time, having 500 books (written or edited) and 90,000 letters to his credit, with works in nine of the ten major categories of the Dewey Decimal system, penned the Foundation trilogy and the I, Robot series, both pillars among science fiction. His plotting was ingenious, and had he been able to empathetically sketch people as well as ideas, he might have gone down as one of literature's true greats. Alas, his characters are cardboard, like those TV characters who are freely interchangeable save for one or two superficial features: this one is mean, this one likes to eat, that one is a geek, etc. Too bad - for every other aspect of Asimov's writing is extraordinary.

Asimov was an atheist, but I always imagine that, if current atheists had been taught the Bible by Jehovah's Witnesses instead of the churches, they may not have turned atheist. It's probably not so but I dream it anyway. For example, in his last autobiographical book, Asimov observes that hell is "the drooling dream of a sadist" crudely affixed to an all-merciful God; if even human governments were willing to curtail cruel and unusual punishments, wondered Asimov, why would punishment in the afterlife not be restricted to a limited term.  [Wikipedia entry on Isaac Asimov] Yeah! Man, I wish he had heard first from Jehovah's Witnesses! Virtually alone among Christian faiths at the turn of the last century, Jehovah's Witnesses exposed hellfire for the vicious rubbish that it is. JW "founder" C. T. Russell was known in his lifetime as the man who "turned the hose on hell and put out the fire!"

At any rate, had he been a Witness, it would have benefited him personally. He died in 1992, of AIDS contracted from a blood transfusion nine years prior.

Still, I am grateful to Dr. Asimov, not only for the hours of intriguing science fiction he laid upon me, but also for his non-fiction works. Asimov's Guide to Science probably was my springboard to individual branches of science. If Asimov lacked in sketching fictional characters, he was gifted in sketching real ones. Not only the pillars, but also the buffoons, he succeeded in portraying the humanity of scientists. It is from him (Asimov's guide to Biology) that I first read of Ignaz Semmelweis, early advocate of antiseptic surgical practices and forerunner of germ theory.

In the mid 1800's, Semmelweis got it in his head that fever and death following doctor-assisted childbirth could be curtailed by washing hands and equipment frequently. Doctors back then would deliver a baby, having just emerged from an autopsy, only wiping their hands on their smocks! There were some sort of tiny "particles" contaminating the women, Semmelweis proposed. Doctors howled with laughter at such nonsense. Asimov's book vividly portrays Semmelweis' presenting his ideas at seminars, with his esteemed audience mocking him, hurling catcalls! Doctors argued that, even if Semmeweis' findings were correct, washing one's hands each time before treating a pregnant woman would be too much work. Semmelweis enforced strict antiseptic practices at the hospital under his supervision, cutting deaths to under 1%, and it made no difference in their attitude! Colleagues ridiculed him his entire life, he suffered a nervous breakdown and, says Asimov, died in an insane asylum tormented by memories of women screaming in their death-agonies following hospital-acquired infections. With Semmelweis out of the way, his own hospital went back to familiar practices and the mortality rate climbed to 35%.

You can read the bare facts in many places, but Asimov's account is the most vivid I have come across, remarkable in a book that purports only to be an outline, a "guide."

Whenever those atheists start prattling on about how scientists graciously change their views at the first hint they may be off-base, whereas it's only the pig-headed religionists who "stay the course" come hell or high water, I play the 'Semmelweis' card.

Athiest or not, I miss Isaac Asimov. 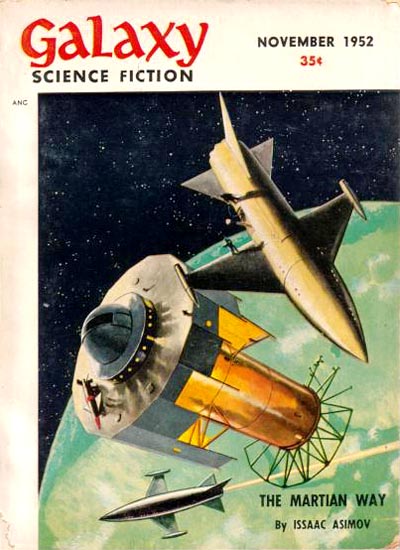 I didn’t know that about Asimov dying from an AIDs infection contracted through a blood transfusion. In fact, while I knew he died ‘relatively young’ I had no idea how, I figured it was some illness or another. That’s rather interesting. Also I agree, I’m amazed at the mans shear volume of output, he really must have been writing nearly all the time.

On matters of religious comparison Mormons also don’t believe in a fire and brimstone hell. We believe in a sort of hell, buts its more of a purgatory in the sense that its not permanent (in all but a very few possible cases, which is debated by some inside the Church) and not necessarily all that unpleasant a place/state. It is were we believe the spirits of those who have not fully accepted, well for simplicity’s sake I’ll say the LDS Church, go to learn in the period between death and the millennial resurrection. Asimov’s points on the traditional conception of hell are well taken.

I didn't know it either, about his death, but only discovered it while reading up for this post. The family kept it quiet until several years after his death.

As for his writing, he supposedly stayed indoors with the shades drawn for days at a time, doing nothing but writing. Do you have any idea how much my wife will let me hear about it if I pull a stunt like that? Of course, his stuff sold like hotcakes. That helped, I'm sure.

It's good Asimov had an impact in your life. I just bought a book of his for a future read.

I didn't realize all that about Asimov. I do ponder your statement about Athiests rejecting religion because of what they were taught.

We all make decisions based on our life experiences. I have always let my mind wander (it's still lost, I think). The more I do so the more I think that evolution is another religion.

The basic ideology is the same. The persecution suffered by a scientist who claims to reject evolution is very similar to bing disfellowshipped from a religion. Has removing God from the equation helped society at all?

I wonder how Asimov would have answered that question.

Science has fundamentalists too.

Paranormal research is still seen as some kind of wacky lunatic fringe, yet string theory, dark matter (which nobody has ever seen yet is spoken of as fact) and things like the Higgs boson, the graviton and many, many other wild ideas are accepted. Even the theory that reality isn't necessarily real unles someone's looking at it. Part of quantum physics, that one.

The man who discovered apoptosis (cells that destroy themselves when damaged, rather than become cancerous) was effectively kicked out of the scientific community after his discovery. Now it's all OK, but far too late to save his career.

Often, new ideas are not simply tested and discussed, which is what should happen and what Science falsely says does happen, but the Moguls, the old school scientists, dismiss them and their sycophants follow suit. The new idea might be rubbish, or it might bne revolutionary. Either way, if it threatens to unseat a Mogul, it will be quashed.

Scientists are people, remember, and are therefore no more incorruptible than anyone else.

I don't know about evolution, I haven't studied the evidence in detail. What I will say (what most scientists are scared to say) is that evolution, if it does occur, cannot be proven to be independent of a guiding hand.

The origin of the universe cannot be proven to be independent of a God.

I think the evolutionists feel backed into a corner and are reacting. They might have some solid evidence for evolution, but push them and they'll react by denying all of religion. As I've said before, one does not necessarily preclude the other.

It's not the competing theories of creation and evolution that lead to problems, because they really don't need to compete. It's the fight between the two that leads to polarisation.

Romulus, I suspected there were many more examples like Semmelweis. You have the background to put your finger on a few of them. Thank you.

Another area, I think, is in "alternative" medicine. When Richard Nixon was in China (early 1970's) he saw surgery being performed on persons without Western anesthesia, acupuncture being used instead. He SAW it, and yet it was decades before Western medicine would concede (and they still do it only grudgingly and with numerous caveats) that acupuncture was anything more than sheer quackery.

I've probably said it before, but a favorite quote is from Max Planck: "People think new truths are accepted when the proponents are able to convince the opponents. Instead, the opponents of the truth gradually die, and a new generation comes along who is familiar with the idea."

I know a man who studied Physical Anthropology at the University of Washington. He studied evolution and came to reject it. Later, he began studying with Jehovah's Witnesses. While still studying, it was found that he needed knee replacements. Since he realized he had found the truth, he refused any blood transfusions. This all happened in the 80's when the blood supply was at its most contaminated. If he hadn't have found Jehovah's Witnesses, he may have ended up like Asimov.

One never knows. Thanks for the input, Alex.

For me medicine is the greatest example of science's blunders and stubbornness. Atheists often forget all the mistakes that doctors have made.

There are innocuous ones like refusing to publish nutritional studies for 20 years that prove the food pyramids high carbs increase diabetes and obesity.

And then there are the damning ones - infant surgery until the 80s was almost always performed without anesthesia. They were given a paralytic and then allowed to feel every slice. Eventually the studies have shown that recovery from surgeries with anesthesia is much easier, but this topic is still debated to this day! Torturing infants without research - Great job science.

Don't forget lobotomies, which will be the subject of my next post, or the one after that.