Bullfights, Bearfights, and Elisha the Prophet

The other day in Madrid, a bull leapt from the ring into the stands. It gored a few, trampled a few, fell on a few. Altogether, 40 were hurt, only a few seriously. Sure scared the wits out of them all, though. Now....you know the way American TV is: they ran the scene as a loop so that you saw it, not once, but several times.  And then the evening news did the same, and the commentaries, and the talk shows, and probably the morning news next day, in case anyone had missed it. In short...if Americans were anywhere that day, they saw the charging bull and the fleeing people.

And......let's be honest. It was hard not to root for the bull. Not to imply that we're happy about the injured people. No. You know me better than that. I didn't say anyone rooted against the people. It's just that they rooted for the bull. These folks had come to see the bull taunted, tormented, tortured, and killed. But the tables were turned! It didn't turn out that way. Well, actually it did...the bull was put to death....but not before he had claimed a few for himself.

Watching the TV loop, wasn't it a bit like those revenge shows people love to watch, where the hero is pushed, shoved, framed, bullied, run over, his family molested, attacked, stomped upon....how can anyone endure such atrocities? but then finally, his nasty tormentor gets what's coming to him, in a blood-pumping mother-of-all fights during which he absorbs blow after blow, knifethrust after knifethrust, javelin piercings, bazookas blasts, gunshot after gunshot (whereas anyone else promptly falls with a single shot fired in their general direction) till he....YES!! staggers and crashes to the ground. Whew!! Our hero's exhausted! He turns his back....why would he not?.. ...and consoles the remains of his long-suffering family, and begins to......OMIGOSH!!!!.....the bad guy's getting up again!!! How is that possible??!! He's creeping up on tiptoe with a crowbar!!!! Our hero suspects nothing! He's not even looking! Turn around, you idiot!! His foe cocks for the final blow!!!  I can't watch!! (well...maybe a little)  but then KA-BLAMO!!!!....YES!! The cowering woman summons all her unsuspected strength and fires one last fatal shot through his head, splattering brains everywhere; he staggers backward and topples over the balcony, falling 40 floors and landing in a packed pool of piranhas, who devour him alive, turning the water bright red, all to the sounds of his agonized screams! YEAH!!!! THAT'S WHAT I'M TALKING ABOUT!!!!

As I say, back to the bullfight.

As a general rule, a rampaging bull at a social gathering would be cause for concern. You'd hope no one got hurt. It takes only one crucial fact....in this case, that the purpose of this gathering was to see the bull tormented and slaughtered .... to turn all our normal sensibilities upon their head. And a thousand years from now, when bullfights are ancient and forgotten history, so that no one could ever imagine such an cruel purpose to any gathering, one might, missing that key fact, find it absolutely barbaric that anyone could root for the murderous bull. Everything turns on one key fact, which may or may not be evident.

All of which is introduction to the account where Elisha calls down evil upon taunting children, whereupon bears come out of the woods and devour them.

And he proceeded to go up from there to Bethel. As he was going up on the way, there were small boys that came out from the city and began to jeer him and that kept saying to him: “Go up, you baldhead! Go up, you baldhead!” Finally he turned behind him and saw them and called down evil upon them in the name of Jehovah. Then two she-bears came out from the woods and went tearing to pieces forty-two children of their number.   (2 Kings 2:23-24)

Let's face it; it's hard to put a happy face on that one. About the best you can do is assign that week's Bible review to a bald brother, who will tap his own shiny dome and pass himself off as one of a protected species, courtesy of 2nd Kings. But might there be some key fact that, just like the missing ingredient in Madrid, might make all the difference if we but knew what it was? It seems a notion worth pursuing.

For this account is from 3000 years ago. And I remember, for example, just 50 years ago, my mother might holler “I'll kill you for that!” if I....oh...say....ate the frosting off her newly baked cake. Americans my age will remember those five words were once a harmless expression you might use on a mischievous child. They might, in some cases, be practically an expression of endearment. The words, in most contexts, were not to be taken literally. Wasn't the accused kid of Twelve Angry Men found “not guilty” when one juror observed just that fact? Today, however, using those words will land you in deep trouble with the child protective people, the hate speech people, and God knows who else. Those oft uttered words of a half century ago are absolutely taboo today (though the deed has become commonplace).

If such a cultural shift can happen in a mere 50 years, what might happen in 3000 years? We think of the small boys of 2nd Kings in terms of kids of today and feel Elisha should count himself lucky they didn't attack him with baseball bats, so that to create such a fuss over mere words is just plain unseamly. But might there have been a societal norm of the day that declared certain conduct absolutely off-limits? Some norm known by one and all, drilled into the innermost fiber of everyone's being, so that a knowing violation would be shockingly unspeakable? A norm that equated mocking a prophet of God to mocking God himself, at a time when God was central everyone's being? It's a plausible notion to me. To you?

To be sure, such a notion flies in the face of the modern-day concept of “human rights,” but isn't there something a little grandiose about that concept? I admit, I'm naturally suspicious of any point-of-view originating in the modern-day, lest it be a manifestation of Proverbs 30:12: “There is a generation that is pure in its own eyes but that has not been washed from its own excrement,” but even with that said, I distrust the concept. I prefer to speak of the “golden rule,” which embraces all that is noble about “human rights,” while discarding all that is pretentious.

For life itself doesn't seem to afford much respect for “human rights.” In his day, Ronald Reagan was arguably the most influential person alive. Ten years later, a victim of Alzheimer’s, he didn't know who he was. If nature itself discards us so easily...if we can so readily and unpredictably fall victim to loathsome disease or frightful accident....well....where is nature's respect for our “rights?”

Not to mention that, if you go speaking of “rights,” it almost seems that you ought to be able to do something about it if such rights are violated. While that may sometimes happen, we all know that, as often as not in the worldwide scheme of things, people's rights are violated with impunity. So how are they rights? Better to apply the golden rule: “do unto others as you would have them do unto you.” (Matt 7:12) It conveys all the kindness of “rights,” but sidesteps what doesn't fit. It does, however, imply humility, and ours is an age where people like to “stand proud,” so “human rights” is the terminology that sticks.

Anyway, I advance my theory in case I myself may someday be assigned a commentary of 2 Kings 2:23-24. I'll have to say something, and I won't be able to play it for laughs, like the bald brothers do; I have a full head of hair. Though.....sigh....it is thinning. Maybe when the time comes, the whole point will be moot. 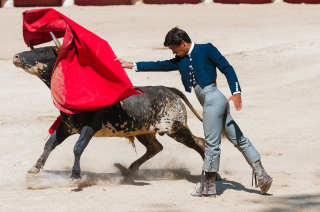 I like the analogy. It is true, though, that times have changed. In fact, I think that Elisha would have to do something similar today to get proper attention. Maybe without the bears, because then just PETA, law enforcement, and perhaps even the court system would get involved.

Of course, there is another point of view. Elisha was presumably wearing (or at least carrying) Elija's coat. Maybe the children were making fun of his clothing? It happens a lot in the urban streets here in America. Many gangs kill over various clothing. So maybe it's not so uncommon after all? I mean, bears don't happen to be available and most dogs are locked up, but it might still happen today..

Only without the prophet part and the disrespecting God part.

It seems the media's lust for violence is the same the world over. I saw that Raging Bull clip on TV in New Zealand and they played it over and over again here too. It was distressing enough to watch the first time. Who in their right mind gets pleasure out of this kind of thing?
It's an interesting parallel you draw with Elisha. I can also think of the account in 1Kings 13:23,24 where a disobedient prophet gets killed by a lion. Both outcomes were endorsed by God (see v.26)
As regards those who are entertained by such cruelty to animals, the age-old adage "You reap what you sow" comes to mind.