Josh Groban and the Watchtower

There's no way I'm falling for this! I absolutely refuse! No! No! NO! Don't try to make me go there.

It's not enough that I made an on-line ass of myself in connection with Randy Newman? And now, do you really think I'm going to do it all over again with Josh Groban? Just how naïve do you think I am? What about that proverb that says “The simpleton believes what he is told: the shrewd man watches where he goes?” (Prov 14:15, Mof) Well, I am no simpleton....I'm shrewd!

On the other hand:

Josh Groban has just released a new CD and just look at the back cover artwork! 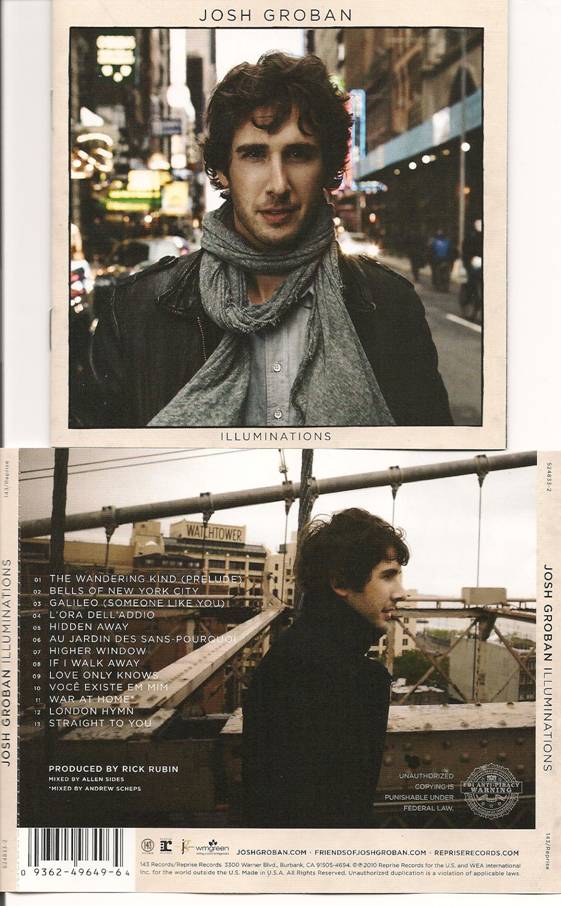 Yes! There is that Watchtower sign, plain as can be.

Get it?? The CD is entitled Illuminations, and who do we all know is the light of this world? That's right, Christians! (Matt 5:14-16) And what organization represents true Christians today and spearheads their worldwide Bible educational work? That's right, the Watchtower! Moreover, (now that we're on the scent) what was Josh Groban's previous album entitled? Right again, it was Awake! And isn't Awake  the name of that beloved worldwide magazine published by Jehovah's Witnesses, second in circulation only to the Watchtower, also published by Jehovah's Witnesses??

Proverbs 14:15 be hanged!! What possible explanation could there be other than......

Josh Groban is now our brother! He completed a Bible study in record time, was baptized, pioneers, has graduated from the Gilead School, and is now serving as a missionary in the Yogiberra Islands!!! Praise be to the heavens!!

On the other hand......I am still smarting from that Randy Newman debacle. Ouch! …..I had insisted before the entire blogosphere...all of it!....that Mr Newman, the singer, was a Bible-thumping Christian, or, at least, that he was not an atheist. For didn't he say in Rolling Stone Magazine that being “sixty something, like I am…..I mean, it doesn’t make you want to run out and hold up a banner for atheism.” Wasn't that proof enough? I even dismissed that pig-headed Plonka, with the clever remark (so I thought) “What would you have me believe.....that he "hardly wants to run out and hold up a banner for atheism," but he runs out and holds it up anyway??” But now it turns out....I mean, it's been established beyond all doubt, that he does indeed run out and hold it up....apparantly, whether he wants to or not! His atheism is well-established!

So I am not going to repeat the same mistake with Josh Groban (even though I just have). I mean, there he is on the back cover, and there behind him is the Watchto.......OH MY GOSH!!!! The sign! It's behind him! He's turning his back on it!! Maybe this record cover is all tongue-in-cheek! Maybe his idea of “Illuminations” is walking away from any pre-existing organization that would claim to represent truth! Or since he's walking away from the Watchtower sign and the Watchtower represents Christianity and Christianity represents God, maybe he's walking away from God! Maybe he and Randy Newman are in cahoots! You must admit, that explanation is certainly in keeping with the spirit of today's times. No, Josh! Say it ain't so! Turn around again!

And look at the song titles on that back cover. Third on the list is “Galileo (Someone like you).” Could that be a reference to Galileo's squabble with the Church over his discovery that earth was not the center of the universe? True, it would be a ineffectual reference, since Galileo, like all scientists of the time (indeed, of almost any time, save the past 150 years) viewed his discovery as bringing praise to God, uncovering the skillfulness of his handiwork, and that the Church's opposition to earth's position and shape does not reflect the Bible's view, the latter issuing statements that are accurate.* But Josh Groban might not know that. Few people do.

I tell you, it's impossible to decide. It could turn out either way. Except for the Yogiberra Islands. Maybe, if Josh Groban comes into the truth, he will not do missionary work in the Yogiberra Islands, but will play a Half-Time Superbowl gig instead, as did that other emminent Witness artist, Prince. Or maybe his mama is a Witness, and Josh wants to do her proud, like Joel Engardio. Or maybe I will write to him, all breathless as to that Watchtower sign, and he will say “Oh.....that?......you know, I never noticed that sign was there. Pity. It sort of ruins the view”!

But in the event that Josh Groban is indeed paying a high compliment to the organization and work of Jehovah's Witnesses, I'd better scour past posts of this blog and clean up any unflattering reference to him. I don't think there will be any, since I've always regarded him favorably, even if he's not entirely my cup of tea. And Mrs. Sheepandgoats positively adores him, so that, even if I thought he stunk, (which I don't) I wouldn't dare say it lest Mrs Sheepandgoats come across it in this blog some fine day and I, as a consequence, find myself sleeping in the garage for a month. So I don't really think there's any........wait....WHOA! There's one: Here I am setting up my review of the Bob Dylan concert, and what should I observe but: “I don’t go to many concerts. My wife, Mrs. Sheepandgoats, made me go to an outrageously priced Josh Grobin concert a year or two ago, but other than that, I can’t remember the last time I went to one.”

Look, let's set the record straight right now. It was not outrageously priced. Josh deserved every penny, even though I could have adopted half the stray cats in Rochester for what I paid to see him. But that's not Josh's fault. He would have sang to Mrs Sheepandgoats and I for free, no doubt, but those greedy promoters....well..you know how they are. And my wife didn't “make me” go. I went willingly, of my own free choice, being a free moral agent, and have never regretted that choice for one moment.

*regarding the Galileo controversy:

The Bible is no textbook on science, but when it happens to touch on science, it is accurate. Accordingly, it says this regarding the shape and position of the earth:

[God] is stretching out the north over the empty place, hanging the earth upon nothing;  (Job 26:7)

There is One who is dwelling above the circle [“round ball” MESSAGE; “globe” Douay-Rheims] of the earth, the dwellers in which are as grasshoppers  (Isa 40:22)

He has described a circle upon the face of the waters, to where light ends in darkness. (Job 26:10)

These accurate statements preceeded modern discovery by over a thousand years.

If that's the case, then why did the Church give Galileo such a hard time? Because they chose to put their stock in verses using common idioms, which we also commonly use, referring to the four corners of the earth, the pillars of the earth, sunrising and sunsetting (implying the sun is what moves), and so forth.

In other words, they (as now, with the Trinity and hell-fire) reached their viewpoint by taking obvious figures of speech literally. And they did so (also like today) so as to be in full harmony with prevailing intellectual thought of the time. Then-current notions about the earth descended from Aristotle and his ilk, and God forbid the Church should show the guts to part with wise Greek philosophers, whose favor they strove so hard to curry.

[Edit: 12/12/2010,   you know, this is as good a place as any to insert the following, as it is also music related, and it deals with rumors that such and such came into the truth. Some will remember that in the early 1970's, rumors swirled that Glen Campbell had become JW. He hadn't, but here is an insider to tell the complete story. It was his guitarist, Red Shea, who had become JW, and apparently drove Glen nuts with his frequent witnessing:

I read your comment on my blog. I just wanted to emphasize as I did at the bottom of my post that it is a fictional account spruced up for the writing prompt. But you are right, just letting people know that you are not interested is the best way to go. Thanks for the comment.

I found your blog by googling Josh Groban Watchtower cover and ended up spending a good deal of time here. Brilliant and brave writing. Nice to have met you, and thanks.

Well....we'll see how brilliant or brave it is when it turns out that poor Josh is stumbled because he really is serving in the Yogiberra Islands and here I went questioning the whole concept.

But thanks for the kind words.

I googled the same thing curious if there was a connection but on his site joshgroban.com there's a post about him and his brother celebrating their birthday together... so there may be some connection but he's obviously not a witness.... :) your post was great reading though... !

Not everyone thinks the Watchtower is cool. I guess it's nice if it should happen that he does.

Wow. I'm a bit floored by that back cover as I gave that very CD to my mom for Christmas; she was the first to grow restless with the faith after convincing my father to join 9 years before.

false quote of a jehovah's witness, we would never say "praise be to the heavens"...tat doesn't make sense to what we believe.

i watched him on a programme called never mind the buzzcocks, a tongue in cheek music quiz, and he was pretty smutty in his humour, so i doubt it.

Actually, I've never heard one say it, either. But the whole post is sort of a joke. It's not meant to be a scholarly dissertation.

Josh Groban is an atheist. If you ever listen to what he says, you would realize it. He follows an atheist on twitter who has written a book about atheism.

Does that mean he is an atheist? Maybe. But I keep track of numerous blogs on the internet even though I don't with them. Does following someone on twitter denote agreement?

His brother Chris is on record via his blog that he is an atheist. That in itself does not make Josh an atheist, but many pieces of this puzzle have come to my attention. My humble conclusion is that Josh Groban is indeed an atheist.

Enjoy the music, forget religion. That is a brain drain, life is short and only 1. Dont live in castles in the sky.

Sorry to burst your bubble:

well.....maybe he's having a mid-life crisis.