Home Archives Profile Subscribe
Hiking Around the World
What the #@%! is Next?

Just north of San Diego, they built a children's beach. It was for the children. The kids needed a beach, don't you see. They didn't get one, though. They were evicted. By sea lions! 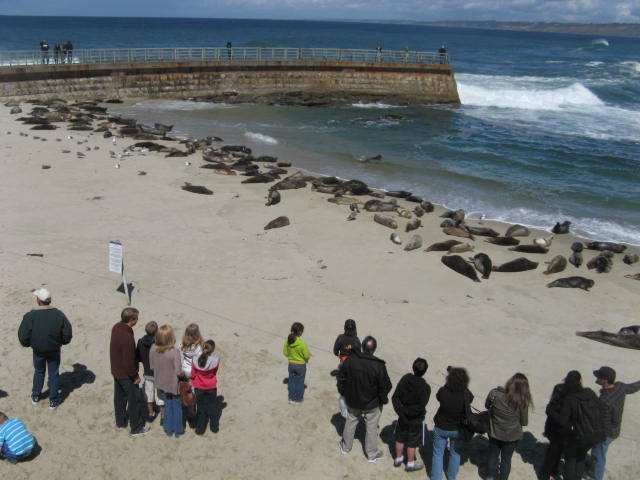 Now, I can think of scores of examples where animals are displaced by people, but how often is it the other way around? It's sort of refreshing, isn't it? The children and seals competed for a time, but the cove's protected nature....rocky cliffs on one side of the beach, manmade seawall on the other....well, word just spread among sea lions...you know how they are....and they came in such numbers so as to drive the children away.  When they started to mate and give birth on the beach, practicing unprotected seal sex, it was time to clear the children out 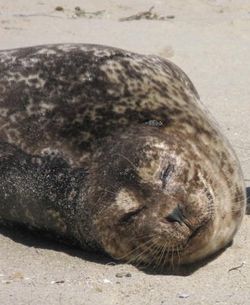 once and for all! There must have been 120 seals lounging about the day we visited.  See how happy this guy is?

Odd birds keep gliding by as you're strolling the sea wall. Line after line of pelicans on patrol, single file, more or less, each line   undulating up and down with the waves. Graceful from a distance, but as they pass close by, you're struck with their appearance. Heads eerily too big for their body, no neck, extended beak....flying gnomes, seeming to eye you closely, though not turning their heads, as if relaying your position to headquarters. 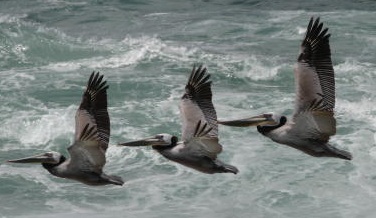 Now, you mustn't feel too sorry for the displaced children, here. Or, at least, if you do, don't feel it from the standpoint of physical well-being. This is LaJolla (Spanish for “the Jewel), California. It's among the wealthiest locales in the US. It's beautifully hilly terrain. It's picture perfect weather. Relaxed, seemingly stress-free people. The PGA just finished up the Farmers Insurance Open at the community's Torrey Pines golf course, and Bubba Watson walked off with a million dollar check. Witnessing is a challenge here, I'm told, since folks have their own bit of paradise right here and now, living in their multi-million dollar homes clinging to the hillsides.  I was glad I was visiting with my wife, Mrs Sheepandgoats, and not Tom Pearlsandswine, who would doubtless glower over the scene, just like he did at the Ithaca Earth Museum dinosaur exhibit, grumbling about the “wiles of Satan.”  Here, his brow would darken...I've seen it before....he'd mutter to himself awhile, and finally blurt out something like: “I don't know how it happened! The have pigs escaped from the barn, and they're in the farmer's house!” 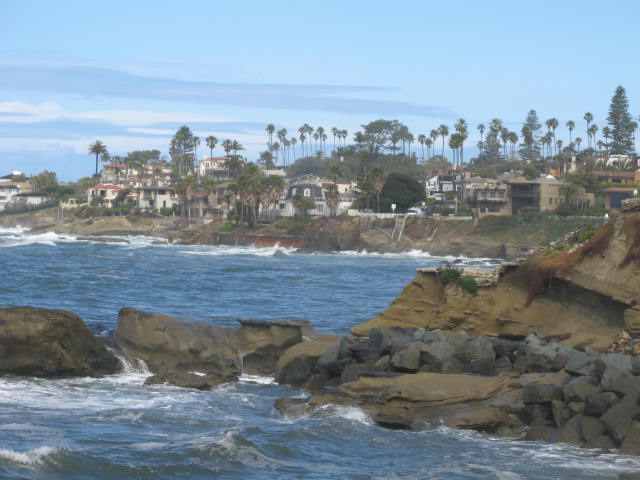 Trouble is, I'm not sure I don't agree with him, except for perhaps that unkind remark about 'pigs.' Is it really appropriate to dwell in untouchable luxury when much of the world lives in unspeakable squalor? Isn't one at risk of losing touch that way, not only with less luminary humans, but even with God? From the freewheeling Message translation:

Ah well, that's kind of heady and philosophical, isn't it? It's just too warm and pleasant here to care much. Maybe if I had the dough, I'd be right here with them. Besides, one can always dash off a check for how-many thousands to whatever charitable cause strikes one's fancy.

We drive along Torrey Pines Rd, gawking at the sights, just as out-of-towners do, water on seemingly all sides,  towering hills to the left, mounted by a huge gleaming white cross, and continue to......wait...a huge gleaming white cross? Here in LaJolla? Here?! Where you substitute shopping for church, and Consumer Reports for the Bible? Rio de Janeiro, okay, you'd expect to find a cross there....but La Jolla? How come the atheists haven't pulled it down? Better go up and check. So we turn up one of the side roads, snaking up the mountain, half-expecting to be ordered off by million dollar residents. Not that they're not nice and all. But like all outsiders on unfamiliar winding roads full of splendid vistas, we creep along slowly. You don't want to run over anyone's child. The guidebook says “some of the most expensive real estate in the world”....yeah, it sort of looked that way. Residents familiar with every turn and hairpin twist keep roaring up behind us in Mercedes or Lexus automobiles, obliging us to pull over and let them pass. But we finally reach our destination. Aha! It's a war memorial. Try as you might, you can't mess with a cross at a war memorial. 2400 black granite plaques surround the cross, each with photos and stories of American servicemen and women. And my Lord! What a view of the surrounding area.

Plus, here's the sign from those frustrated atheists that I figured had to be here. They did try to take that cross down, I 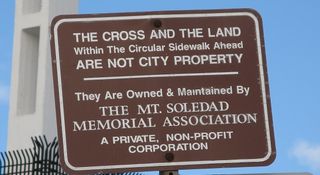 mean, they must have, knowing them and knowing the times we live in, but the task looks impossible for now, so they had to content themselves with a disclaimer. It only remains to put up some stupid counter display of their own, like they did at that Illinois nativity scene.

Back to real people the next day. We breakfasted in downtown San Diego, on Fifth Street. Cafe 21, a restaurant you must visit should you find yourself in the area. Normally, an omelet is an omelet.

Any orangutang can make one, and it makes no different where you have yours. But here, breakfast had personality. Everything's unique. The owners hail from Azerbaijan, a map thereof appears on the menu, and the husband stopped by to chat. The waitress stewed over some scheme of the local politician's to extend parking rates into the evenings, plus weekends. What's a working person to do? Already, she parks afar and scateboards the distance to work. She was just that right combination of friendliness, wit, and loopiness. Surely, a native San Diegan! Nope, she says, she comes from Ohio. Ohio! Right next door! We could be cousins. She and everyone else. I can't tell you how many people we met who've transplanted themselves from the northeast.

What am I doing in freezing my rear end off in upstate New York? Taking solace when March 1rst comes, imagining on that day that one can almost begin to perhaps see the foreglimmerings of the light at the end of the weather tunnel? When we returned on March 26, it was colder than when we left!

I know, I know, it's my theocratic assignment. That's how we come to think of it when we're stuck in some armpit of a location.  It will continue to be my assignment until I jump ship and go somewhere else. “Don't worry, Jehovah will provide. Besides, I'm outta here,” I'll say as I roar off. But I probably won't leave. Family is here, extended family, and friends, so that we're all locked here in a conspiracy of inertia. Not to mention that.....it's my assignment.

There were other things we did in San Diego. Other beaches we visited, for example, like in Ocean City, where rows of pelicans cruised by to update our

position, oblivious to the changed socio-economic surroundings, And the zoo, which would take several days, I think, to take it all in. Now, I'm used to zoos in which the animals bunch up as far away from the visitors as possible, and just sit there like sullen union members, not doing squat. But San Diego is a Paul Simon type of  zoo...and the animals will love it if ya do, now.....these creatures interact. They're not shy at all. 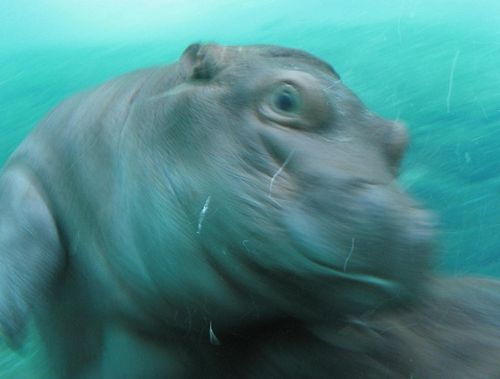 It was a nice vacation. We don't travel much, nor do we usually go far. I'd never been west of the Mississippi. A short stay in the Poconos is more our speed. But the kids are out of the house, now. Some bills are paid off. Maybe we'll do it again someday. Starting with this post, I believe I'll start a “Travelogue” category.

We even visited friends who had one of those GPS devices. And to think I've been pulling over in traffic like an old fogey, unwrinkling gigantic maps, painstakingly finding my place, plotting a course, and then driving a half mile and doing it all over again! Just like Pop. He's even older than I am! My first run-in, years ago, with a GPS device made me suspicious of them, but no more. Maybe Mrs. Sheepandgoats will buy me one as a present, and since we don't do Christmas, maybe I won't have to wait nine months.

They do make you an idiot, however. Like the person we met at the hotel swimming pool who told us of some sight to see in San Diego. Wow, we said, how do you get there? No idea, she said breezily. You know....GPS. It's sort of like the calculator wars playing out all over again. Thus, I once knew a CPA who would not use a calculator, and generally not even an adding machine. He was strictly pencil and paper! What a nutjob! Face it, we're all destined to become stupider and stupider for the duration of this system of things. Resistance is futile.

Tom Irregardless and Me     No Fake News But Plenty of Hogwash

Interesting post. Sounds like you had a very interesting holiday (that's the kiwi word for vacation). It seems the world is the same all over. We have beautiful coastal areas here too where people enjoying their slice of paradise are very difficult to witness to.
I'm intrigued to know what your assignment was? How far did you travel altogether to fulfill it?
BTW: Is that hippopotomus smiling? He seems to know he's being photographed.

It'll probably be the new system before I venture too far beyond our shores for a holiday. Unfortunately, it's become my habit to holiday no more than 4or 5 hours drive away. I should probably be more adventurous but I keep thinking it's MY assignment that PREVENTS me. Besides I might catch the travel bug.
I keep telling myself "Home's good enough for now".

I've no formal assignment, really. Just speaking the lingo. Yes, it does look like the hippo is smiling, doesn't it?

And my new "travelogue" category is so embarassingly limited, maybe I'll take it down again. Other than San Diego, my other posts are all a stone's throw from home, just like you.

Some of the most interesting places I've visited have been in our local territory while out witnessing. We get to see all the little 'nooks and crannies' that most people don't get to see and it's all in our own 'back yard'. Perhaps I should start taking a camera with me...