Can you really put a smiley face on the world, with but a little tweaking, or even none at all? I wouldn't think so, but there are plenty who disagree.  Sometimes, trying to make me mad, they scour Watchtower publications for pictures of Armeggedon, and post them on their websites. Jehovah's Witnesses are mean, they charge. Look how they print such pictures, traumatizing the little children! 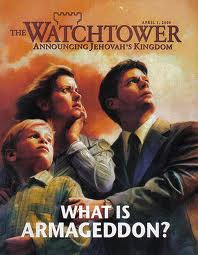 Many of these grousers, amazingly, are ex-Witnesses, who have tired of organized cooperation with a Bible educational work. These have reassessed their former view that today's world merits God's disapproval, instead concluding that it's a nifty place to find fulfillment.

Typifying this view, here's a comparative religion website accusing the Watchtower Society of "maintain[ing] a state of high anxiety in their membership by stressing the imminence of the end." We would not have phrased things this way.  Instead, we would say that recognition of where we are in the stream of time goes a long way to allay anxiety. It's as though these web writers think all is just peachy worldwide and everyone would know it were it not for JWs fouling the air with their “high anxiety.” 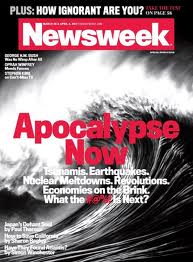 “Tsunamis, Earthquakes, Nuclear Meltdowns, Revolutions, Economies on the Brink!” No anxiety here, is there? I tell you, for anyone with a memory, it's absolutely amazing to see such despairing words on the cover of a national magazine. Surely Newsweek, representing the world's collective wisdom, has some reassuring words for the children? Ah...yes, here it is, just below the list of calamities: They say “What the #@%! is next?!”

And to think that my 7th grade social studies teacher had us all subscribe to Newsweek, on the premise we would thereby become well-informed. Was I anticipating future covers of that magazine when I began my World News Oral Report with the words “What the #@%! is next?” and spent the rest of the semester writing “I will not swear” on the chalkboard? As adults of this system have failed the children in so many ways....in morals, in education, in personal and group and financial security, they now fail them even in reassuring rhetoric. “What the #@%! is next?” is the best they can manage. Why not further say: “We haven't a clue, kids. We've screwed things up in every way.”

For that matter, why not say “Jehovah's Witnesses are Right?” For Jehovah's Witnesses have been saying for decades that the present system of things is doomed to extinction, to be replaced by God's Kingdom. Everyone else says or hopes that God will somehow bless the present hash of human governments, so as to collectively bring us all a happy future. Well who doesn't want a happy future? But a happy future is not something humans can provide. It comes only under God's Kingdom. No human has the slightest role in bringing that Kingdom about. God himself does that. But we can position ourselves to benefit from it. That is the long-standing message of Jehovah's Witnesses, coupled with an invitation to study the Bible itself.

Hey, it's not been an easy job. It still isn't. “Aw, go soak your head,” people tell us. “What a bunch of alarmists! We've always had bad things happening!” I can hear the refrain now.  Naturally, the Bible reader thinks of 2 Peter 3:3,4:

First off, you need to know that in the last days, mockers are going to have a heyday. Reducing everything to the level of their puny feelings, they'll mock, "So what's happened to the promise of his Coming? Our ancestors are dead and buried, and everything's going on just as it has from the first day of creation. Nothing's changed."   (the paraphrased Message translation; it may not be literal, but it sure is fresh)

Well....we sure haven't always had magazine covers like this one of Newsweek's! It's as if the editors are collectively throwing up their hands and crying “Sheesh! Everything humans touch turns to shit!” (Normally I would never use such unsavory words as “shit,” but I am unwholesomely influenced by Newsweek's #@%! It really is true that “bad associations spoils useful habits.)

The only time I said “What the #@%! is next?” was when I saw the price of the magazine. $5.95! Weren't these things under a dollar when I was a kid? With more pages? And better written, not dumbed down like it is today? I know, I know, it's unfair to be critical of a mass publication for “dumbing down.” The Watchtower is dumbed down, too. We all know it. As the world's education system steadily goes down the toilet, so do collective reading skills. If you want to reach a broad audience, simple writing is the way you have to go, however painful it may be for guys who cherish reading. But there's hardly any need to rub it in: Note above the Newsweek banner is the byline for another story: “How Ignorant are You?” Am I being too sensitive when I read between the lines: “We're not ignorant.....you are!”?)

To be faithful to the Bible, you need to talk about things not so pleasant. You just do. And destruction of “the ungodly” is not so pleasant. Nobody says otherwise. The only caveat.....and it's a significant one....is that a person can be saved from it by adhering to divine direction. Isn't that, when push comes to shove, a good thing?

Now....see if you can spot the spurious words I've cleverly inserted in the following passage: Revelation 6:12-17 (Message Translation, again) in which John prophesies

“…..a bone-jarring earthquake, sun turned black as ink, moon all bloody, stars falling out of the sky like figs shaken from a tree in a high wind, sky snapped shut like a book, islands and mountains sliding this way and that. And then pandemonium, everyone and his dog running for cover—kings, princes, generals, rich and strong, along with every commoner, slave or free. They hid in mountain caves and rocky dens, calling out to mountains and rocks, “What the #@%! is next?”

There. Did you spot it? What they actually cry is "Refuge! Hide us from the One Seated on the Throne and the wrath of the Lamb! The great Day of their wrath has come—who can stand it." But I try to keep up with contemporary jargon per Newsweek.

Or, what about the words of Jesus:

Nope. What they actually call to the mountains is “Fall down on us! Cover us up!”

We take a lot of flak for adhering to the Bible's teaching of Armageddon, great tribulation, destruction of the wicked, paradise earth under Kingdom reign, and so forth. Jehovah's Witnesses are a serious religion that doesn't hedge its bets. We're not all over the board. We unabashedly hold to key Bible tenets, no matter if they find scorn elsewhere. For, to be sure, if you don't think God will call “the ungodly” to account, if you don't think God will one day intervene dramatically in world events, then Jehovah's Witnesses and all that they represent are ridiculous, a perfect target for derision. It all depends upon where you're coming from.

But pertaining to Armageddon.... look, I don't know just who will and who will not go down at that time. Nobody does. Can you be some distance from theocratic provisions or not one inch? Dunno. But why not stay in a known place of safety and take part in a work in which it is good to take part in any event, simply on the basis of Rev 4:11?

“You are worthy, Jehovah, even our God, to receive the glory and the honor and the power, because you created all things, and because of your will they existed and were created.”

God created all things. The massive experiment of human self-rule is turning out exactly as he said it would. He deserves our service.

Is it coincidence? In the same month Newsweek throws up its hands in mass despair, Jehovah's Witnesses intensify their ministry as never before.  Here in Rochester, most congregations have 50-80% or more of members in some form of “pioneer service,” volunteering 30-50 hours of their time in Bible teaching. As they visit neighbors, they don't say “What the #@%! is next?” Instead, they point out today's disintegration is all foretold, and is a precursor to God fulfilling his promise to bring peace and paradise on earth through his kingdom.

We like verses like the following one in Psalms. We think they're soon to come true. And we don't just sit on the information, we do our best to tell others so they can benefit too:

And just a little while longer, and the wicked one will be no more; And you will certainly give attention to his place, and he will not be. But the meek ones themselves will possess the earth, And they will indeed find their exquisite delight in the abundance of peace.   Ps 37:10-11

Does not this Psalm recall Jesus' words “Blessed are the meek, for they will inherit the earth.” They certainly haven't to date. But Jehovah's Witnesses believe this promise is soon to be fulfilled, and they invite others to examine the evidence.

[EDIT....58% was the figure of those in some sort of full-time service during April, so reported our C.O. recently. (figures in your circuit may vary)]

Hi Tom, Nice post.
It's interesting to see how Newsweek is beginning to echo what the witnesses have been saying all along. For years I've listened to people voice sentiments like that in 2 Peter 3:3,4 like how "nothing's really changed." and that "history's merely repeating itself"... "Life will just carry on as it always has" they say.
But as you say, Jehovah's witnesses have never been so active – that's new. We've stepped up our efforts in this part of the world too. At a recent circuit assembly the CO asked for a show of hands from all those enrolled as AP's. Looking around, there was a SEA of raised hands (including mine) in an auditorium with an attendance of about 1,000. Then he announced that 45% of the circuit were signed up for increased activity in April.
As I expected, Satan has responded by stepping up his efforts too, even resorting to outright persecution in some parts of the world. Like Bulgaria for eg. where an angry mob attacked JW's at their memorial celebration last week. Check it for yourself at the following link: (read entire post first)

I personally found it a bit upsetting, it's unedited and pretty graphic, however it moved me to pray intensely for the brothers over there. Note the part the media plays in stirring things up.
Anyway, it shouldn't surprise us that Satan would use the media to keep people in the dark about what's really going on. Of course Newsweek reports on matters from a purely human point of view as does the rest of the media. But as Ezekiel foretells (Ezek. 38:4, 16, 23) The end result is inescapable for Satan as 'Gog' will be reeled in like a big fish by Jehovah God himself. It'll be interesting to see how it all plays out.

Thanks Dave, you do get the sense things are intensifying.