"Because Then You Will Find the Culprits"

In late 2008, trashing bankers was the way to go, what with the huge economic breakdown....a breakdown which has lately rekindled, this time with Europe the flashpoint. I have no great love for bankers, so I hopped aboard.

“Hi. We're speaking today about a group of people no one likes,” I began my house-to-house presentation. “Bankers.”

The householder replied: “I'm a banker.”

“I'm a big-time banker,” she pursued. “So are all my family.” For crying out loud! What are the chances? Believe me, there was nothing about the street to suggest big-time bankers lived there. Frankly, I still think she was pulling my leg, but you won't have to stretch your mind too far to picture that the call sort of fizzled.

My companion was mortified. He still brings it up to suggest how embarrassed I must have been. But I wasn't. Light and semi-flippant is the way I like to go; that way you can readily retract if you see you've missed your mark. It's exactly the right tone to cut through apathy, or cynicism, or dullness, and we have a lot of that here in the United States. Plus, if you find you've come across a sincere person, you can immediately modify your tone. This won't work everywhere; it might not even work in most places, but in the U.S.A, at least where I live, it's just right, at least for me. It doesn't work for Mrs. Sheepandgoats, but then, her approach doesn't work for me. We all have to make the most of the personalities we're stuck with.

I was aiming that day to speak of security, specifically financial security, since it didn't seem to exist just then. Remember, the whole world was on the edge, said the Economist, a condition which is being revisited as I write, except blasé people say “been there, done that.” and pay much less attention than three years prior. But I was trying to nudge folks into discussion of Isaiah 65:21-23:

Many people sense today that they are building and planting so that someone else can live the good life. Protesters are camping out right now on Wall Street and major U.S. cities, angry about the top 1% of the population controlling 99% of the wealth. President Obama is preaching for all he is worth about creating jobs, jobs, and more jobs. Is it an ill omen for him that even Steve Jobs just died? So it seemed that folks might be receptive to this Bible promise recorded in Isaiah, that under God's Kingdom rule, they will see good for their hard work, rather than finding they just dig themselves deeper into a hole while someone else sees good for it.

Recall three years ago that the banks had just been “bailed out.” They'd been given massive cash transfers, funded by the taxpayers, and taxpayers weren't happy about it. Would anyone bail them out of their money troubles? Or would those banks, now that they had been saved, go easy on the small fry indebted to them? Not a bit of it! Instead, they began tossing people from their homes, as the housing market collapsed, jobs withered, and folks fell far behind in their mortgages. Yes, they booted them out right and left until someone uncovered a law that said you actually had to read documents you were signing when someone's home was at stake. Banks weren’t doing that. They were robo-signing! The courts said they could no longer carry on like that. So they had to hire people to actually read the stuff, which slowed them down a bit. But only temporarily.

…..the kingdom of the heavens has become like a man, a king, that wanted to settle accounts with his slaves. When he started to settle them, there was brought in a man who owed him ten thousand talents [60,000,000 denarii]. But because he did not have the means to pay [it] back, his master ordered him and his wife and his children and all the things he had to be sold and payment to be made. Therefore the slave fell down and began to do obeisance to him, saying, ‘Be patient with me and I will pay back everything to you.’ Moved to pity at this, the master of that slave let him off and canceled his debt. But that slave went out and found one of his fellow slaves that was owing him a hundred denarii; and, grabbing him, he began to choke him, saying, ‘Pay back whatever you owe.’ Therefore his fellow slave fell down and began to entreat him, saying, ‘Be patient with me and I will pay you back.’ However, he was not willing, but went off and had him thrown into prison until he should pay back what was owing. When, therefore, his fellow slaves saw the things that had happened, they became very much grieved, and they went and made clear to their master all the things that had happened. Then his master summoned him and said to him, ‘Wicked slave, I canceled all that debt for you, when you entreated me. Ought you not, in turn, to have had mercy on your fellow slave, as I also had mercy on you?’

As one senator (Ron Paul) pointed out, since the total bank bailouts eventually came to $17,000 per person, with no discernable economic benefit, you might have just given the money directly to the individual Americans. The results could hardly have turned out worse, and might well have turned out better. Debts would have been paid down, new purchases made, small businesses started. So that's why I led off with my “bankers” presentation. It's not something I would ordinary do.

By the way, whatever became of Winged Migration Man? Was he hurt by the collapse? It hit retired folks especially hard. WMM used to comment here a lot, and I cherished his comments. They were witty, they never agreed with me, yet they were always respectful. But his last one showed discouragement. He wrote: (first comment on this post)

The present debacle ….has devastated many an unsuspecting individual who had been led to believe his house would continue to appreciate and his 401K was as safe and as dependable as the tide, and unfortunately it is not over yet. This hard working individual who was probably reared to believe that the system of Free Enterprise and Capitalism would allow him to achieve what most folks felt was the American dream.....I do trust that those of you out there that read this blog know that I hope you all will recover from this financial downturn that has developed.

I know, I know. In these days of massive instability, a person can do much worse than merely suffer financial loss, no matter how large. Still, this crisis hurt good, decent people. I hope he made out okay. 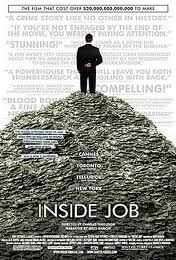 which was to expose the fraudsters behind that 2008 collapse. When it hit the theaters here in Rochester, I did what I never ever ever do. I went to see it without waiting for the DVD release, or at the very least, for it to hit the cheap theaters! But amazingly, it only played here for a week, and it was gone! I had to go to Buffalo to see it, and even there it played only in a couple second-run movie houses. This seemed so odd to me that I theorized conspiracies had to be at work! ME! Tom Sheepandgoats, who never goes in for that kind of thinking! Not that I don't think that people aren't low enough to conspire; they're easily low enough. I just don't think they're smart enough. You have to be able to keep your stories straight for any conspiracy to remain hidden.

The film no one saw went on to win that year's academy award for best documentary. Director Charles Ferguson, accepting his prize, delivered the only serious line that entire star-studded silly night: “Forgive me, I must start by pointing out that three years after a horrific financial crisis caused by massive fraud, not a single financial executive has gone to jail, and that's wrong!” The movie's doing well in rentals, in contrast to its initial debut, and I highly recommend it. In fact, I'll review it soon. And in the spirit of movies.....here's a teaser preview:

CHARLES FERGUSON: Why do you think there isn't a more systematic investigation being undertaken?

NOURIEL ROUBINI (professor, NYU Business School): Because then you will find the culprits.

It's looking increasingly likely that this financial fraud will bring the system down and lead to conflicts and chaos, imo.

I thought the OWS (Occupy Wall Street) was just a U.S. phenomenon, but it has spread. "951 cities in 82 countries" is now the mantra.

Best part of the movie is when economist Glenn Hubbard (Dean of Columbia Business School and former economic advisor under President George W. Bush)is asked if it would be reasonable to disclose the fact that he had financial ties to products and services he was talking up in an official position. The tone turns glacial as he realizes what kind of interview he's been in, and says "This isn't a deposition sir, I was polite enough to give you the time, foolishly now I see. You have three minutes. (short pause) (pompous windbag on) Give it your best shot."

Andy, you've read my mind. I fully agree. And the thing of it is, I could have told him that tactic wouldn't work. Years ago I used those exact same words on Mrs. Sheepandgoats when she was ragging on about my so-called shortcomings. It's amazing how much damage a determined woman can do in three minutes!