Home Archives Profile Subscribe
Who's Messing with Charlie Brown's Christmas!?
Tebowing to the God of Football

What We Learn From Earthquakes 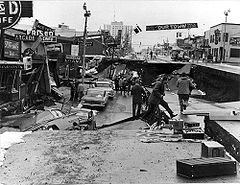 Preachers can' resist natural disasters as opportunities to beat people up. They just can't. See?.....they'll say, that's what you get....God's dishing out the punishment. You must have done something pretty bad.They won't agree as to just what that bad deed is, necessarily. Instead, they assign their own pet peeves to God, as though their gripe must be His gripe. Thus, when Katrina hit New Orleans, Pat Robertson right away said that God did it to show how mad he was about gays and abortion. Ron Nagin (mayor, not clergy) had no problem with God doing it, but changed the reason: God was steamed over America's foreign policy and treatment of blacks!

With characters like this, it's a wonder we're not all atheists! Perhaps the greatest public service Jehovah's Witnesses render at such times is to tell people God doesn't do it. He doesn't cause calamities. After all, why New Orleans? Why them? They're not exactly creampuffs up here in Rochester, either, but God hasn't smitten us. (though He has caused Kodak to flirt (quite promiscuously) with bankruptcy, humbling our once-proud city, causing that company even to blow up some of their empty buildings so as to get them off the tax rolls.)

Almost to a person, Haitians believed the quake that leveled Port-au-Prince (Dec 2009) was punishment from God. But Jehovah's Witnesses, preaching tent to tent afterwards, repudiated that preachers' pet notion and told them it wasn't. “We assure them,” says a local Witness in the December 2010 Awake magazine, “that the earthquake was a natural disaster and not God's doing. We show them Genesis 18:25. There, Abraham declares it unthinkable that God would destroy good people along with the bad. We also show them Luke 21:11. there, Jesus foretold great earthquakes for this time [“Nation will rise against nation, and kingdom against kingdom;  and there will be great earthquakes, and in one place after another pestilences and food shortages; and there will be fearful sights and from heaven great signs.”], and we explain that he will soon resurrect dead loved ones and remove all suffering.” The article goes on to relate the rebuilding work JWs carried out, both physical and spiritual.

But if God doesn't cause natural disasters, that doesn't mean they might nonetheless be a sign of the last days of this system of things. Just like the earthquakes mentioned above. Are they? And, regarding earthquakes, if God doesn't cause them, just why do they happen now in such numbers so as to validate Jesus' words? Has there really been a collosal increase in earthquakes? I used to think I knew. But I'm not so sure now.

However, it may be that in the new system, we'll have the good sense not to build in earthquake prone areas. Perhaps we won't build big cites, period...you've never seen a city in any of those paradise tracts, have you? Maybe we'll build with quake-proof materials and techniques....the Port-au-Prince Bethel, built that way, hardly suffered any damage at all, even as most of the city was reduced to rubble. Or it may even be that in choosing human rulership over God's Kingdom, people demonstrate preference for the government that cannot control natural disasters over the government that can. As we read about Jesus: "But they felt an unusual fear, and they would say to one another: “Who really is this, because even the wind and the sea obey him?” Maybe earthquakes will obey him in the new system, too. They don't obey Presidents, Prime Ministers, or Premiers, but maybe they'll obey Jesus.

Great earthquakes are right in there as one of the signs of the last days, even if we can't put our finger on exactly the cause. And I'm not dissuaded by full-of-themselves people who point out, with much self-satisfaction, that the “great” in great earthquakes is because of increased population. So? That doesn't mean they're not “great.” You think they measure things up there by the Richter scale? Might it be human suffering that triggers the “great?” Nor am I impressed when they carry on about how “better news coverage only means we're aware of earthquakes more than we used to be.” Nah.....that might be the case if we were tracking “earthquakes,” but we're not. We're tracking “great earthquakes.” A “great earthquake” always makes it's presence known, even if you don't have satellite TV.

But you have to keep up with changing times. You don't go plotting earthquakes on your world map time line trying to prove that they once were scarcer than hen's teeth, whereas now they shake things up every time you turn around.  It may not be that way. “The U.S. National Earthquake Information Center reports that earthquakes of 7.0 magnitude and greater remained "fairly constant" throughout the 20th century,” writes Awake! of 2002 March 22 p.9. “Note, though, that the fulfillment of Jesus' prophecy does not require an increase in the number or power of earthquakes. All Jesus said was that there would be great earthquakes in one place after another. Furthermore, he stated that these events would mark the "beginning of pangs of distress." (Matthew 24:8) Distress is measured, not by the number of earthquakes or how they rate on the Richter scale, but by the effect that they have upon people."

The Bible does not emphasize the number of earthquakes during the last days. However, it does say that great earthquakes will occur in one place after another, making them one of the notable features of this momentous period of history.

WHAT DO YOU THINK? [this is a subheading, and subheadings are capitalized] Are we seeing great earthquakes, just as the Bible foretold? Earthquakes alone may not seem to be conclusive evidence that we are living in the last days. Yet, they are only one prophecy that is being fulfilled."

I've even heard some grousing from grousers that these quotes represents substantial JW toning down of prior statements regarding earthquake activity. Nah. All it shows is we're keeping up with advancing knowledge. What's wrong with that? We do it in the fields of earth geology and life development. Why not here?

In some ways, Jehovah's Witnesses are like the Lord impaled between two thieves, only in this case the thieves are so intractably opposed to one another that if you please one, you infuriate the other. If you do anything to keep up with advancing knowledge....a commendable feat in any other discipline....you incur the wrath of religionists, who accuse you of flip-flopping. And if you stay the course in any way, you tick off the scientists, who take for granted that when they say “jump,” you and everyone else ought to respond (and make it snappy!) “how high?”

Okay, okay, I'll back down a little on increased earthquake activity. But I'm sure not going to do it with regard to increased natural disasters. The ground is firmer here, practically quake-proof. For instance, New York Governor Andrew Cuomo, in his 2012 State of the State address, observed that, while he didn't want to get into a debate on global warming.....is it or is it not happening?......“100 year floods are now happening every two years, so something is clearly happening.” I heard him. It's not in the printed transcript; like any decent speaker, Cuomo speaks extemporaneously a lot, and his speech was engrossing, whereas the transcript itself is a little dull, a bit like reading Cliff notes. So you'd have to dredge up his speech on YouTube. Someone must have put it there.

So....let's do natural disasters as the next topic.

I apologize if my previous comment offended you. I will take this as a sign that you would prefer I avoid commenting at all here. No problem. I'm not trying to win converts, just have discussions.

You are more than welcome to stop by my blog and comment at any time. Speaking of which, I have replied to your earlier comment there. I promise I will not comment any further on your blog beyond this comment.

All the best to you,
-TWF

Sorry, I made every effort to reply to your post last night (and was much bummed when I could not). It was not until reading your comment this morning that I tried again, this time using Firefox, and not IE. It works! But for whatever reason, IE would not activate your links. Even though it seemed not to make sense, I figured you had closed that post to comments.

I assure you, I'm not offended at all, nor did I see anything you said (beyond disagreement) that might offend me. Feel free to comment here anytime. Like you, I rather like it when people disagree with me, providing that disagreement is reasonably respectful. As yours easily was.

I may have just been a little too hasty! Those comment moderation queues can make it seem like the comment was rejected if it does not appear in a "timely" fashion. :-)

Sorry IE was giving you trouble, and thanks for your persistence!