At the end of each year, media looks back to recap just what went down in the past 365 days, even as they brace for the new year. Didn't Ogden Nash point out that every new year is the direct descendant of a long line of proven criminals? It was a light and breezy line when he said it, long ago, but over time the criminals are getting nastier and nastier. PBS ran a story Dec 28th titled “How 2011 Became a 'Mind-Boggling' Year of Extreme Weather” Anyone halfway observant knows that last year blew us away (sometimes literally) for extreme weather, but people of scientific bent demand evidence! So here it is:

Whereas normally there are three or four “significant” weather events per year in the U.S, last year chalked up twelve. The prior record breaking year, 2008, 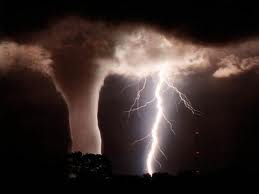 registered nine. “So, we went a third again in the number of events each of which had greater than a billion dollars, many other events, of course, that just fell below that billion-dollar threshold through the course of that year, quite a remarkable string, quite a remarkable array,” said Kathryn Sullivan of the National Oceanic and Atmospheric Administration.

Jeff Masters, of Weather Underground, added: “we talk about the Dust Bowl summer of 1936. Well, this summer pretty much matched that for temperature, almost the hottest summer in U.S. history. We also talk about the great 1974 tornado outbreak. Well, we had an outbreak that more than doubled the total of tornadoes we had during that iconic outbreak. And, also, we talk about the great 1927 flood on the Mississippi River. Well, the flood heights were even higher than that flood this year. So, it just boggles my mind that we had three extreme weather events that matched those events in U.S. History.”

The story focused on U.S. weather events, but worldwide extremes were not ignored: “Weather around the world showed equal extremes. Australia was hit with record flooding, followed by one of its worst tropical cyclones ever. Floodwaters also ravaged parts of Thailand and China, while the Horn of Africa suffered its worst drought in decades.” Jeff Masters especially keeps track of drought, since that corresponds with social upheaval. Russia cut of wheat exports in 2011, so bad was their drought. Food prices surged, and it's thought that the Arab spring revolts were caused, in part, by that woe.

For my money, New York Governor Andrew Cuomo said it best in his 2012 State of the State address. He didn't want to get into a debate on global warming, he prefaced, but “100 year floods are now happening every two years, so something is clearly happening.” 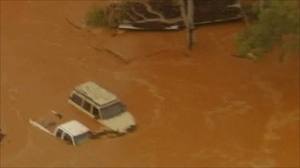 Does rotten weather count as one of the signs of the last days that Jesus ticked off? You have to force it a bit. I mean, it's not so directly mentioned as are earthquakes, food shortages, wars, and so forth. Does it fit under the “fearful sights and from heavens great signs” of Luke 21:11? Or is it a factor, among many, that when put together, give relevance to Jesus' fig tree remark? “Note the fig tree and all the other trees: When they are already in the bud, by observing it you know for yourselves that now the summer is near. In this way you also, when you see these things occurring, know that the kingdom of God is near.” (Luke 21:30)

No one in the story's comment section pays any attention to Biblical relevance, of course. They just debate over whether the extremes do or do not indicate global warming, since upon that question hangs major economic policy. One character remarks weather may not be getting any worse at all; we simply have miraculous scientific measurements today so that we notice things more, as though the flattened town of Joplin, Missouri might not have registered upon less enlightened folk of a generation ago.

Weather Underground's Jeff Masters thinks global warming is positively a factor, and by pumping more heat energy into the atmosphere, the result is weather events “on steroids.” If he's correct, then surely extreme weather is but another manifestation of humans “ruining the earth” today, as Revelation 18:11 says.