As politicians go, they're popular. As politicians go, they're capable...Mayor Michael Bloomberg of New York City, and Governor Andrew Cuomo of New York State. Following notable trainwrecks of governorship, Cuomo has made inroads on the seemingly impossible.... prodding, cajoling, and otherwise leaning upon the notoriously dysfunctional State government to....well....function, at least to a degree. Don't get me wrong. He has a long long way to go. But he's made some progress, whereas predecessors have all broken apart on the unyielding rocks of intransigence.

So imagine my dismay when State Senator (and Pentecostal preacher!) Ruben Diaz blasts Cuomo and Bloomberg on the blogosphere for being “unmarried fornicators!” Wow! Talk about letting your light shine with a flame-thrower! I didn't know anything of their private lives, nor was I curious, but it turns out that  both men live with long-time girlfriends, not wives. 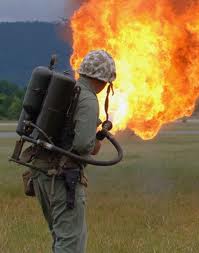 “I, for my part, don’t want to offend anyone,” wrote Diaz on a cable show website, “but the Bible, the word of God, calls it fornication to live as husband and wife without having made this union a wedding officially blessed by God and man.”

Sheesh! Were these two fellows elected to patch roads and herd politicians or teach Sunday School? Can't a guy learn to mind his own business? Whatever happened to 1 Thess 4:17-18, the famous MYOB verse, a verse some of us have learned to wear as a shield:

….make it your aim to live quietly and to mind your own business and work with your hands, just as we ordered you; so that you may be walking decently as regards people outside and not be needing anything.

Or can we not catch more than a whiff of disapproval in Paul's next letter to that town of busybodies:

For we hear certain ones are walking disorderly among you, not working at all but meddling with what does not concern them.    2 Thess 3:11

John the Baptist pulled a stunt like this, and it cost him his head. Did he come to regret it?

For John had repeatedly said to Herod: “It is not lawful for you to be having the wife of your brother.” But Herodias was nursing a grudge against him and was wanting to kill him, but could not. For Herod stood in fear of John, knowing him to be a righteous and holy man; and he was keeping him safe.......But a convenient day came along when Herod spread an evening meal on his birthday for his top-ranking men and the military commanders and the foremost ones of Galilee. And the daughter of this very Herodias came in and danced and pleased Herod and those reclining with him. The king said to the maiden: “Ask me for whatever you want, and I will give it to you.” Yes, he swore to her: “Whatever you ask me for, I will give it to you, up to half my kingdom.....She said:....“I want you to give me right away on a platter the head of John the Baptist.” Although he became deeply grieved, yet the king did not want to disregard her, in view of the oaths and those reclining at the table. So the king immediately dispatched a body guardsman and commanded him to bring his head. And he went off and beheaded him in the prison and brought his head on a platter.     Mark 6:17-28

If Cuomo and Bloomberg are anything like Herod, Senator and Preacher Diaz should watch out. That's one way to look at it.

If Sen Diaz is “digging up dirt,” he certainly didn't invent the technique. Since time immemorial, accelerating in recent decades, politicians have gleefully slung mud at each other for pure mean political advantage. The excellent example playing out as I write is the Republican Primary race. (do we conclude anything from the fact that supporters in this contest physically resemble their candidates? I defy you to watch coverage and not be struck with that impression) Diaz, however, makes his charges not for political gain, but out of moral outrage. I respect that. After all, I, Tom Sheepandgoats, well-known in circles of matrimonial bliss for spoiling rotten the fabulously omnipresent Mrs Sheepandgoats, can hardly be expected not to empathize with Diaz, even if he is sticking his nose into what's none of his business.

Or is it indeed none of his business?

The reason Diaz gives for his remarks certainly rings true. “Everyone living in this situation is reinforcing the idea that it is okay to live in common law without being married” I give him credit for inserting common sense into a world that wants no part of it. We are heavily swayed by the example of others. It's so tempting to deny this, because it's a very unflattering truth. The selfish, the over-educated, and the headstrong do deny this, so as to pursue whatever they want to pursue without twinge of guilt or responsibility. But when a new fad appears on the scene, and within ten years we're all doing it....even as we look aghast at our photos 30 years ago....how did we ever think those glasses did anything for us?.....it's so flattering to the ego to think our vulnerability to our surroundings only extends to the trivial. It's so flattering, yet it's also so ridiculous. In matters small and great, we run with the herd.

So Sen Diaz is absolutely right to insist public examples exert influence, whether they're meant to or not. Trouble is, isn't it a little late in the game to close the barn door?

I'm reminded again of the Circuit Overseer's remarks: “70* years ago the differences between Jehovah's Witnesses and churchgoers in general were ones of doctrine.” That is, conduct and morality was pretty much the same. Why have we retained traditional morality, whereas most lost it long ago? Because we've internalized Diaz' sentiments within our own organization. Because we have organization that insists upon studying God's sayings and adhering to them. Because we try to choose friends in harmony with that end. Because we realize that bad examples will influence others. Because we have internal discipline to curb bad influences. Believe me, we are roundly chastised for it by those who cherish blowing whichever way does the wind. But it has served to maintain Bible morality among us. Many churches also used to apply discipline to their members. But when they noticed parishioners didn't like it, they gave it up.

(* adjusted for the date spoken)

The reason John the Baptist could get away with it (if having your head chopped off can be called “getting away with it”), or rather, the reason he could upbraid Herod for his unorthodox marriage without going down in history as a busybody or a template for Senator Diaz, is that Herod claimed to be a Jewish proselyte. He claimed to worship Jehovah. Does Coumo? Does Bloomberg? Not that I'm aware of. So what business are their private lives of mine? It would be like me reaching into the Catholic or Presbyterian church and demanding they make their folks adhere to Bible standards. Why would I do that? It's not my business.

Chalk this up to one of the oldest disputes regarding the role of religion toward the general world. Ought one stay at arms-length from it, keeping “no part of the world” while through a ministry inviting individuals from it to take a stand for God's Kingdom? Or ought one role up one's shirtsleeves, dive in and fix the world, or even convert it, viewing that as your ministry? We think the former, but many church groups think the latter.

If you think the role of Christians is to fix the world, then you have to fix the world with the tools you have. Thus, Senator Diaz' reprimand is entirely appropriate. But from the ranks of folks like him arise those who insist America is a “Christian nation,” and so strive with all their might to impose their standards upon it, (an impossible task, since the very idea of sovereign nations is foreign to God's will) and who might well blow Republican chances this election by ignoring all factors except religious affiliation in the candidates. Thus, Mitt Romney, widely considered the most viable of Republican choices, emerges a weak candidate from the Republican primary race (unless it occurs to his campaign to register dead voters).

But Jehovah's Witnesses view their role toward the world along the lines of 2 Corinthians 5:20:

We are therefore ambassadors substituting for Christ, as though God were making entreaty through us. As substitutes for Christ we beg: “Become reconciled to God.”

In short, using words of the verse, we invite persons to embrace God's purpose as their own, to become reconciled to him. It's a process that begins with a Bible study, which is how one finds out what God's purpose is. If someone reaches the point of wanting to “reconcile to God,” then, by degrees, he conforms his life to God's standards. But if he doesn't reach that point, if he has no interest in making inquiry, what business is it of ours how he live his lives? None. We don't try to make it such, nosing into his life to tweak this or that practice, let alone blasting him in public. Will there one day be an accounting for rejecting God's purpose and standards? JWs think so....you know they do.....but it won't be at our hands. We fancy ourselves ambassadors of a kingdom, no more. We invite, we don't meddle. It's an important distinction, though perhaps one lost upon someone woken up Saturday morning at 9:30.

Tom Irregardless and Me     No Fake News but Plenty of Hogwash

I remember being a disappointed Jehovah's Witness boy in 1980 upon reading in the "Happiness - How To Find It" book that an activity I'd taught myself to do was frowned upon. Were those words of caution written by the Brothers in Brooklyn enough to keep me from continuing to fornicate against myself? Nah.

Yours is an interesting blog, Thomas, of the 'slice of life' variety.

"Frowned upon" is an apt description. What do you think they should have done....recommended it as the soma of our day?