Who Would Ever Think That Kushner Fellow Who Bought Our Building Would Become the World Center of Attention?

From 'No Fake News but Plenty of Hogwash:'

2. The other side blamed Putin, who

4. I worried it was my fault. I was then writing ‘Tom Irregardless and Me,’ my first book, and I licensed out to the media video of my flying fingers for reasons of cash flow. Now - I like a good shot after every meal, and I unfortunately left the bottle of vodka in plain sight by the keyboard. The media jumped to conclusions. Trump himself came closest to the truth. ‘It could be Russia, it could be China, it could be some 400-pound guy in New Jersey.’ Wronnngggg! – I’m in New York, not New Jersey. And I am not 400 pounds (yet). At the next debate, they brought out a 400 pound guy – was he there to rattle Trump? They seated him behind a skinny guy, so that he looked 600 pounds.

5. Jehovah’s Witnesses (my people) moved their headquarters from Brooklyn Heights, where they had been for over 100 years, to way, way out in the sticks.

6. Jerod Kushner, Trump’s son-in-law, bought their old building. Video of him saying nice things about Witnesses appeared on jw.org. I had no idea who he was at the time, but when I found out, I worried anew. See - I caught a heavy dose of news each day while I was writing, and it irritated me, but I stuck with it – how else would I learn about the snowfall outside my window? Now, no one is capable of total non-bias, but they are capable of trying. I’m not used to the referee leaning on the scales – it never used to happen. But when I would grouse about the media, which I did a lot, some took it as support for Trump! I could picture the Watchtower sign going down, a Trump sign going up, and fellow Witnesses, who weren’t paying overclose attention saying: ‘how did Tom manage that?’

Evil Losers, Not Cowards, Those of Senseless Violence, or Those Seeking to Change Society

In the aftermath of Manchester, if words can be called refreshing, surely "evil losers" fits the bill. As Trump says, you don't call them monsters; they will like that designation. These are not people who look at themselves in the mirror and gasp: "what have I become?"

Nor do you call them 'cowards.' To give your life in support of a cause, any cause, is the very opposite of cowardly.

Nor do you carry on about ‘senseless violence.’ If your goal is to kill people, it makes perfect sense.

Nor do you carry on ineffectually about how "we will not change our way of life because that is what they terrorists want." I suspect they do not want that at all; what they want is for people to continually prance around openly like bowling pins, easy to knock down. Surely if you say such inane things about not changing your way of life, you should acknowledge that it is at the cost of funding 100 cops in riot gear, whereas one with a baton used to suffice.

In their quest to undermine the President, I half expect journalists to turn critical of his label, describing it as 'judgmental', 'knee-jerk,' or juvenile. There's only so much you can do with rhetoric. But I'll take it over what we've had to hear in the past any day.

I like "evil losers" also because it doesn't pretend to have a handle on the problem, as some other responses have. Banal remarks about not succeeding in the fight to change a way of life implies that terrorists are merely a nuisance, like mosquitoes.

Of course, what can never be addressed is how easy it is today to transform people into evil losers. And how, if you succeed in taking one out, there are ten in the wings waiting to take his place. Or, when mighty nations are bombing the snot out of weaker ones, how easy it is to turn on the citizens of that nation, thinking them not so innocent after all, since they vote into office the ones who order the bombing.

Dissent on the Margins

Since I am retired and do nothing but write, I am putting together a short Ebook (which gets longer all the time) on the Russian ban, the letter-writing campaign, and things leading up to it. This one will be a freebee, unlike the others I have written  – ‘free’ is more in keeping with the spirit of things. They should all be free, but unfortunately, writing is my sole gig. It’s either that or Mickey D. for me.

En route to gathering material, I came across a book entitled Dissent on the Margins, which is about the history of our people in Russia, published in 2014. The author, Emily Baran, is not a Witness, nor a cheerleader for us, but she gets it right with regard to her facts - she relates them accurately and impartially. She has been quoted on jw.org. Her book has given me much context, preventing what might be some clumsy missteps, and I recommend it.

It’s pricey, but less so as an Ebook. And worth it, if you’re into history and non-biased commentary. Whereas my books are largely anecdotes and experiences, my ‘research’ mostly just nailing down the specifics of things or events I already know about, she actually has done the academic kind. Her book is heavily footnoted with materials both from Witnesses here and in Russia, as well as government archives.

There must be a scripture somewhere insulting the sea. If there is not, there should be. Rochester, my home town, is not on the sea and has no beef with it, but it sure does with the lake.

Lake Ontario is a mini-sea in its own right. Along with the four other Great Lakes, it constitutes one fifth of the earth’s fresh water supply. People have built homes on the shores of the lake, figuring that where the lake is, the lake is. Why would you not? But this year, the lake level is two feet higher than normal. Imagine! The entire lake! Let some math nerd figure out the volume increase – it shouldn’t be hard. Actually, the idea appeals to me, except I’m lazy. Give it to some kid for homework or let him bring it to class for extra credit.

When a boat sails by, those people on the shore sweat. They do so even more some when a wind kicks up. Even in calm times, the water is lapping up against their foundations. Their beach as disappeared and their decks are submerged. The beach about which I wrote “Horses in Water’ no longer exists.

The government is passing out sandbags and sand to fill them with. Volunteers appear to help the beach dwellers out. My experience is that sandbags are okay for a day or two or modest rise, but not for much else. The lake level is supposed to be high – it is still rising – all season. 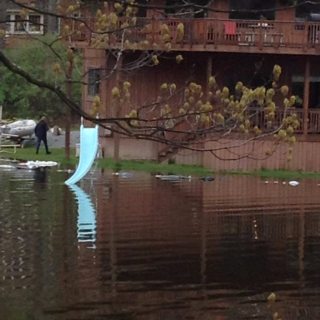 Why don’t they drain the lake? someone asks. Just open up the St. Lawrence river more and let that stuff drain out to the sea. Unfortunately, people live along the river, too. An entire city is there, Montreal Canada, and they are seriously flooded as it is. To drain 1 inch of water from Lake Ontario will result in a rise of 10 inches for Montreal and other river dwellers. “Go for it, anyway!” say the besieged lakeshore dwellers, but Canada says ‘no.’

Leroy Whitehouse passed away the other night. I’ll miss that man. A tall, drawling, deep throated, 80-something-year-old black man from the deep south, I used to jest with him how I hoped he would one day give my funeral talk:

LeRoy would uninhibitedly offer comments to the 50/50 congregation about his younger days back home “working for the white man.” Or relate how even long term Bethelites are not perfect, illustrating it with a brother who declared “I don’t give a damn!” Taking the nervous titter in the audience for appreciation, he repackaged the line and ran it through two or three more times: “I don’t give a damn!”

I will miss him plenty. He was a friend.