Home Archives Profile Subscribe
Enough of the 'Summer of Love' Already
What Sayeth Bob Dylan About Social Justice? - Nothing!

I checked out Bob Dylan's The Basement Tapes from the library. These are songs recorded in his Woodstock basement around 1967 and never released. Someone spirited out a grainy tape of them and that has sufficed until, 50 years later, a producer type restored the stuff and released it properly.

I love the rendition of 'Don't You Tell Henry' because the song is sung to the accompaniment of the most oafishly inept trombone I have ever heard. "Sounds good!" Dylan happily cries out between verses at the horrid horn - they're obviously having a good time here, and good times are contagious. Somehow, crazily, it all comes together.

I learned also that 'Clothes Line Saga' in the same release was apparently a parody of 'Ode to Billy Jo,' a song all the rage in 1967 - a reference to some horrendous teen tragedy. 'Have you heard the news? The Vice President's gone mad! ... Say, that's too bad' takes on new significance in this light.

Real talent in someone young is almost always cocky and obnoxious. Recall how Amadeus ridiculed the house musician of his patron? In the Pennebaker movie Dylan does a brilliant 'It's All Over Baby Blue' in his lodgings and then-heartthrob star Donovan follows with a simple plucking of his ordinary song. "Wow, that's a great song!!" Dylan gushes. 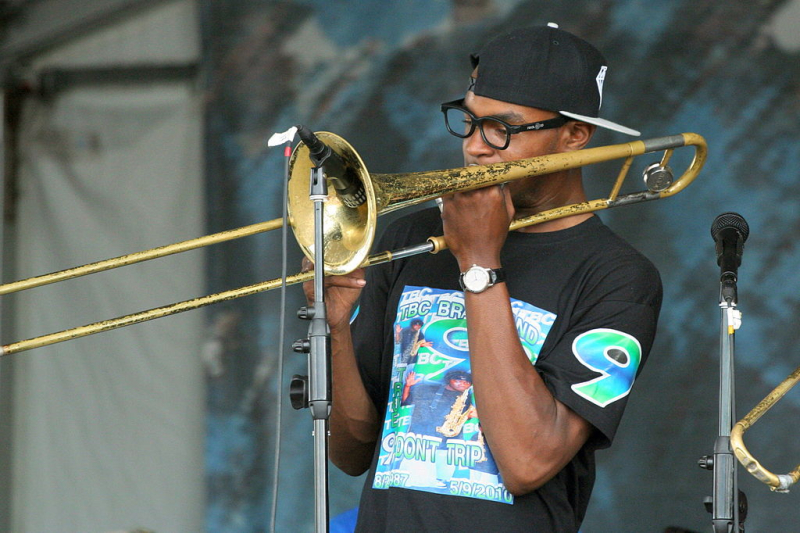 I don't think he is like that anymore; when he speaks of others now, he is unfailingly kind. Though mostly he is lost in a (says my son-in-law) self-absorbed haze of vodka. This is the same son-in-law who claims the ability to watch any performer and tell what drug he is on. "There's something to be said for drugs," he quips upon watching Mick Jagger's mesmerizing performance in the Scorese 'Shine a Light' movie.

In a three hour studio session, most bands would complete a song or two. Dylan would do a dozen written the week before. He'd do no more than two takes, and it was time to move on. If there were bloopers, as there are in many of them, they became part of the song, and later listeners would gripe if covers didn't reproduce the errors.

photo: TBC Brass Band (NOT the trombonist of the post)

(Note to self: cover Lise’s anecdote)