Home Archives Profile Subscribe
When Life is Treating You Good, Pull Closer to God
It Just Might All Be True

I Didn't Know it When Lynard Skynard Went Down

Forty years ago their plane went down, killing six. I didn't know it at the time. It was during my righteous period when I was not listening to music. But in the years since I have heard song after song that I have liked, starting with 'Sweet Home Alabama,' only to find it is one of theirs.

My righteous period lasted nearly 20 years. It didn't end until my kids reached the age where they wanted to attend concerts like their friends and I wasn't too happy about it. But I realized you cannot stop lava and so I gave in, with the stipulation that I would go along too. The first concert was Weezer. Everyone held their hand out in line to get stamped, so I held mine out too. "You don't need a stamp," the attendant said - I little disrespectfully, I thought. So I shot back: "Aren't there any grownups here?" Oh, yeah, the boy was thrilled to have me along. But I rather liked Weezer, or at least I did not dislike them.

I used to play a game with my kids which, in hindsight, was a little sick, but the purpose was noble and I think ultimately successful. I didn't want them idolizing any band members, so we would play: 'How did they die?' Was it suicide, overdose, or plane crash? It's amazing how long that game can be played.

Lynard Skynard wins hands down, though Badfinger gets runner up. The lead singer hung himself. The group disbanded and some went back to laying carpet. Years later they regrouped with a new lead singer ... and he also hung himself! The fate the second group, however, and the existence of the first group, I only discovered after my righteous period had ended.

Lynard Skynard had just released the album 'Street Survivors' when their plane went down. The cover pictured the group standing before a wall of flames. Someone prevailed upon the record company to take the flames out and substitute a plain black background. The surviving members were ever a mess and some met their end through overdose. The band still survives with but one original member.

Removal of the flames from the album cover was for symbolic reasons. Strictly speaking, it was not necessary. There were no flames in the plane crash - the plane had run out of fuel. You would almost think someone would check on something like that before takeoff. It is a fine reason not to be stoned. 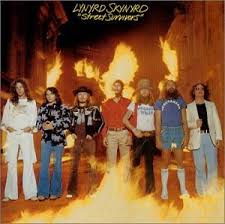