Home Archives Profile Subscribe
Did the Bible Writer Malachi have Teenagers?
I Asked My Doctor about My Problem Prostate, and He Prescribed Takapis

Do (Fill in the Blank) and the Terrorists Have Won!

I always thought it was a stupid line that "the terrorists are trying to disrupt our way of life." It never made sense to me. 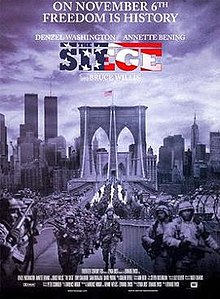 If anything, I figured the exact opposite was true. They DO NOT want to disrupt the way of life of those they would attack. They want them to continue to walk about as bowling pins, all the easier to knock down.

Sure enough, it was only a matter of time before car dealers and the like were exhorting the public to keep carrying on as before - why if they alter their consumer way of life, the terrorists have won!

But I never actually knew where the stupid slogan came from. Until last night. I saw The Seige movie from 1998 on TV. On a hunch, I checked out Denzel Washington's retort to the general about the terrorists winning.

It was the filmmaker's line! The slogan comes from Hollywood! It is from BEFORE the pandemic of actual terrorist attacks. Not from anyone who actually knows anything! It is just a story! Who would have thought?

An online movie summary includes: "[Denzel] Washington's character, FBI agent Anthony Hubbard, struggles as the fight against terrorism takes over the city. He's the first to introduce the 'terrorists have won' rhetoric."What if what they really want is for us to herd children into stadiums like we're doing and put soldiers on the street and have Americans look over their shoulders - bend the law, shred the Constitution just a little bit?' he asks in a furious tirade. "'We do that and everything that we have bled and fought and died for is over."

Oh, sure! Motley terrorists huddled back home green with envy over the hedonistic society abroad, rubbing their hands with glee at the thought of screwing up their Constitution! Now THERE'S a cause to die for!

A lot of stupid stuff originates with the 'furious tirades' of make-believe movie characters! And what does this tell us about the pundits who reiterate this wisdom? Where do they have their thinking forged? What serves for their 'sources?'