They ask Jesus a question and he takes so long to answer that you figure he has forgotten all about it.

The exchange is found at Matthew 15:1-20.  First he asks a counter question- a Strawman! - it would be called today (but wasn't then). He addresses their motive - an adhominem attack! - it would be called today (but wasn't then).
(the handwashing has nothing to do with hygiene - it is a ceremonial thing and involves washing up to the elbow)
Then the scoundrels who asked the question storm off and the disciples tell Jesus that they were upset. He tells them not to worry about it.
Then he seemingly veers off on another topic over what it is that defiles a man- what comes out of his mouth or what goes into it. It is what goes out: foul things that he may say. Only then does he finally answer the question - 20 verses later - and the ones that demanded he answer are no longer around to hear it! 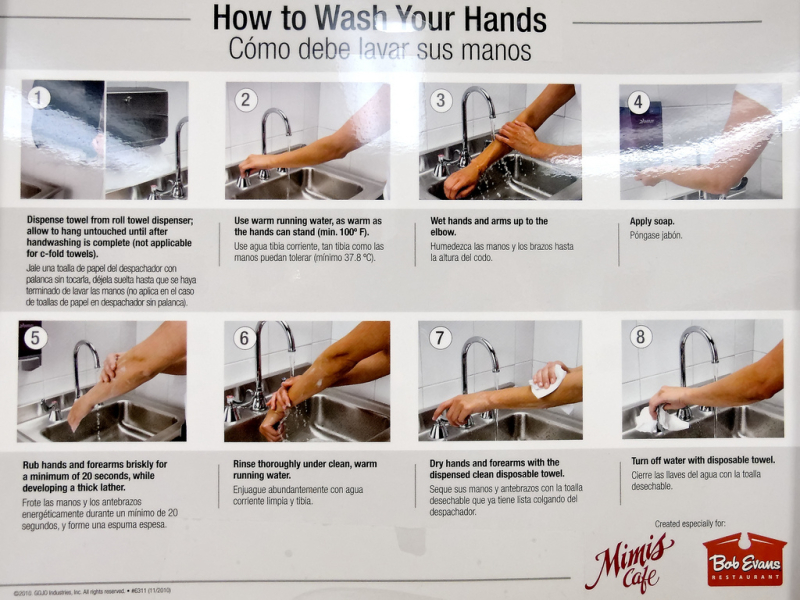 Then there came to Jesus from Jerusalem Pharisees and scribes, saying: "Why do your disciples overstep the tradition of the men of former times? For example, they do not wash their hands when about to eat a meal.”
In reply he said to them: “Why do you overstep the commandment of God because of your tradition? For example, God said, ‘Honor your father and your mother,’ and, ‘Let the one who speaks abusively of his father or mother be put to death.’ But you say, ‘Whoever says to his father or mother: “Whatever I have that could benefit you is a gift dedicated to God,” he need not honor his father at all.’ So you have made the word of God invalid because of your tradition. You hypocrites, Isaiah aptly prophesied about you when he said: 'This people honor me with their lips, but their hearts are far removed from me. It is in vain that they keep worshipping me, for they teach commands of men as doctrines.’” With that he called the crowd near and said to them: “Listen and get the sense of it: It is not what enters into a man’s mouth that defiles him, but it is what comes out of his mouth that defiles him.”
Then the disciples came and said to him: “Do you know that the Pharisees were stumbled at hearing what you said?” In reply he said: “Every plant that my heavenly Father did not plant will be uprooted. Let them be. Blind guides is what they are. If, then, a blind man guides a blind man, both will fall into a pit.” Peter responded: “Make the illustration plain to us.” At this he said: “Are you also still without understanding? Are you not aware that whatever enters into the mouth passes through the stomach and is discharged into the sewer? However, whatever comes out of the mouth comes from the heart, and those things defile a man. For example, out of the heart come wicked reasonings,r murders, adulteries, sexual immorality, thefts, false testimonies, blasphemies. These are the things that defile a man; but to take a meal with unwashed hands does not defile a man.”  (Matthew 15:1-20)
photo: Mark Turnauckas
Defending Jehovah’s Witnesses with style from attacks... in Russia, with the ebook ‘Dear Mr. Putin - Jehovah’s Witnesses Write Russia’ (free).... and in the West, with the ebook ‘TrueTom vs the Apostates!’ (free)