Home Archives Profile Subscribe
Which Falls Do You Do?
Who Doesn't Need Encouragement?

In new New York You Can do Fireworks

Fireworks are legal in New York State. Not always, just a week or so around the fourth of July. Makeshift sales tents pop up everywhere hawking the goods.

It never used to be that way. I worked so hard with my boy when he, long ago, started pestering me about the stuff, harassing me night and day. Do you think I could convince him, my own child, that fireworks were not legal in New York State? Not just dynamite, but also cherry bombs and even ladyfingers. They are illegal. You can’t blow them off in New York. Yes, they are legal in some states, but New York is not one of them. Tired of arguing with a kid who dressed head to toe in Goth black to parade around in the mall with friends dressed the same way and didn’t stop until I threatened to dress head to toe in white and follow him everywhere, it suddenly dawned upon me how to solve the problem.Talk to a cop! What a brilliant idea! I drove to the area police station. Were fireworks legal in New York State? No, they were not. What about ladyfingers? No they were not. What about on holidays and special events? No, that made no difference! What about…..LOOK, said the cop, you got a listening problem?! NO means NO.!! Now if you want to break THE LAW, go right ahead, but we’ll be coming after you!! All that 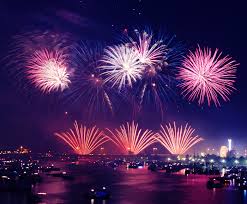 as missing was for him to draw his gun.

Elated, I skipped home to grab my son and return. Yeah! Tell the kid what you just told me! Scare the everloving daylights out of him!

But Joe Friday wasn’t there!! Instead, it was jolly Officer O’Mallahan! Well….he patted my boy on the head, with a twinkle in his eye, just be careful, and don’t shoot them off too much!! Thanks a lot, copper!!! If this kid grows up to be a pirate, I’ll know who to blame!

And now it turns out that it was all for nothing! Fireworks are okay, now. And no, he has not become a pirate. He does do a lot of traveling, though.