Mickey Would Love It

I wrote the Mickey Spillane summit parody for Jane Spillane, who is re-releasing the Mike Hammer tough-guy series of late 1940's private eye books. It is a spoof on what if the President had handled Putin like Mike Hammer might handle a crime boss. She loved it. She said so on my FB and Twitter feed.
I wrote it because Mickey Spillane later became one of Jehovah's Witnesses and his work changed a lot. That triggered my interest in his books. Now, Jane is not a Witness, probably has mixed feelings about them at best, and may feel they were responsible for 'sabatoging' his work, since his post-JW writings lose the excess sex and violence and thereby become less of what Mickey himself once said about Hemingway and the highbrow authors: "What those guys could never get is that you sell a lot more salted peanuts than cavier."
Nonetheless, there is no way she could not have picked up on his enthusiasm for the truth, and probably concedes that that is what ensured he remained the upright man he always had been. Jane is intensely political, another reason for the theme of my post. She assures me that Mickey would have been a Trump-man, too. I have not the slightest doubt of it, with the exception that he would know how to keep political leaning its place, and not disturb the peace of the congregation with such matters. All human governments will drop the ball, usually it is a bowling ball, and the only open question is upon which toe will it land. As individuals ponder their own toes, some will favor the left and some the right.
Anyhow, I said to Jane that we could help each other. I will use the story to hopefully (this is extremely hard to do) flag the attention of some high profile figures, and did she want to be tagged or not?. She did. Good. It's a win-win, potentially helping both our causes. Mine is to direct attention to this blog, the first thing that hits the eye is a link for my free ebook Dear Mr Putin - Jehovah's Witnesses Write Russia, which calls attention to the plight of our people there, (along with answering many a scurilous charge) and that goal motivates nearly everything I do these days. I draw some of my inspiration from Anton Chivchalov, who devotes his European days as "an observer of Jehovah's Witnesses persecution in Russia.' These days it is important to bring one's gift to the altar.
Since the violence and sex is excessive in those pre-Witness days, it is easy to dismiss the novels as so much garbage. However, as to the writing itself, Ayn Rand (The Fountainhead, Atlas Shrugged) lavished high praise on them and compared them favorably to some elite authors of the day. Mickey's own dad, I think he was a bartender, called his writing "crud." Ayn Rand did not feel that way.
Atlantic Magazine (I think it was) interviewed him in later years ('I may write one more Mike Hammer, but that's it. I can't sit eight hours in a chair anymore. My rear end gets sore.') and pointed out that his latter books were winning some critical acclaim. "To Mickey's disgust, one suspects," one suspects, the author adds. Come on! It is impossible not to love this guy. He had the combination of intense interest, yes, even love, of people, coupled with an absolute lack of pretence, and a willingness to go 'in your face,' traits that were a trademark of Witnesses of a certain generation.
Jane herself, I am not sure that she realized it, give me the ultimate green light, when she said of my scheme: "Mickey would love it." 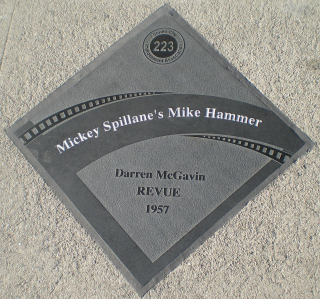