It's Because We're Jehovah's Witnesses - A Respite from Monsoon Living

When the border guard asked my daughter's friend from Canada, recently Honduras, how she knew her companion from Australia, recently Myammar, who both had come to visit American friends and camp in the Adirondacks, she, caught unawares, said the first thing that popped into her mind: "We're Jehovah's Witnesses." The guard accepted that as the answer, and he pursued the topic no more.

Did he do so because he knew that with Witnesses, national divisions mean nothing and they routinely hop all over the globe? Or was he a scaredy-cat who feared they might witness to him?

The two had stopped by the house to pick up the Aussie's suitcase, which through some crazy sequence of events that I did not even try to get my head around, yet another friend had stored at my house for safekeeping, they being in and out too much to reliably be at home for pickup and subsequently taking for granted that I was a stick-in-the-mud who would be. I learned long ago that I am no longer TrueTom but my childrens' dad. I do what I am told and I don't open my mouth; it just complicates things.

California was burning up on the TV with the state's greatest fire in history when they arrived and they were dismayed at the sight, but there were no mentions of the 'last days' on that account. Their dismay was tempered by the fact that they get around and see and hear of such disasters all the time. For the most part, American TV news cares only about what is happening within the country, and if calamity strikes people elsewhere, it is barely a footnote, unless it is kids trapped in a Cambodian cave.

Certain numbers of Jehovah's Witnesses' youth have long volunteered to serve as missionaries abroad, being trained at a school called Gilead to do this. About 20 years ago, the general invitation was sent out to just about anybody, young or old, who could work it into their lives, following the example of Paul ('step over into Macedonia, and help us') to relocate temporarily or even permanently anyplace on earth where there was a preaching need. A sizable minority of our youths take them up on this. My daughter has done so.

Though grueling in many ways, she and her husband love the experience. The Branch, she says, takes substantial care to ensure that the experience will be a good one and that no one arrives unprepared. They know that the volunteers are stepping far outside of their comfort zone and they bring them up to speed on cultural, political and safety climate, so that these produce as few surprises as possible.

When my daughter experienced severe dental problems, a resurfacing of injuries suffered as a teen, it turned out that she could hardly have been in a better place. She flew to nearby Thailand, which has dental clinics so excellent and relatively affordable that Americans halfway around the world line up to fly there. She did it discreetly, conscious that for most of her new native friends, if they suffered such injuries, they would simply go toothless. However, the locals asked her husband point blank about where they had been, and when they learned the answer, they bore no one any ill will. There is a general gratitude that outsiders would willingly accept vastly lower standards of living, and they are not expected to "go native" in every respect.

Not all can acclimate. One friend, of slight build to begin with, became quite ill in her new home and had to leave. I figured she had caught some horrid disease and perhaps her goose would be cooked, even back in the States, but she promptly put the weight back on and thrived. "Some foreigners simply can't hack the change," nod the locals, as they wade through eight inches of routine monsoon water in pedal-to-the-metal humidity.

My daughter had sufficient lead-in to her new life and learned how to handle herself long ago. Working with a congregation in the Dominican Republic, the young boys would surround her lodging and yell teasingly: "Hunnah! You are oogly!" But she would reply: "Thank you! That is so nice of you to say that!" and they, unsure of their English skills, would walk away confused. All dads can be relied upon to overstate their children's attributes, but suffice it to say that she is, by no stretch of the imagination, ugly, let alone oogly. 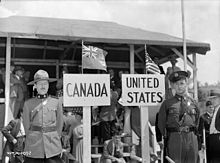 Posted at 08:32 AM in Jehovah's Witnesses Ministry, Need-Greaters | Permalink | Comments (0)