Home Archives Profile Subscribe
Ben Franklin Gets Jilted and Flip-Flopping on the Resurrection
Who is a Cult? Just About Everybody, it Turns Out (Part 1)

'It's My Party' Plays at the CharBroil Corral

The fellow on the left (stage right) is the driving force of It’s My Party, a recreation of the all-girl groups of the 60’s. Some of the performers (it is an 8 or 9-piece backup band) are high school students, as I’m pretty sure the girl in the middle is. She stood by as I spoke with the one on the right, a college student from out-of-state. Even while working both hands, the drummer beams at the audience for long takes, as though he is P.T. Barnum, so pleased that the audience is enjoying his greatest show on earth. And they did enjoy it. By the end of the show, during which the girls had changed into new outfits (closely resembling a certain sister at the Kingdom Hall), they convincingly transported geezers in the crowd to ‘back in the day.’ 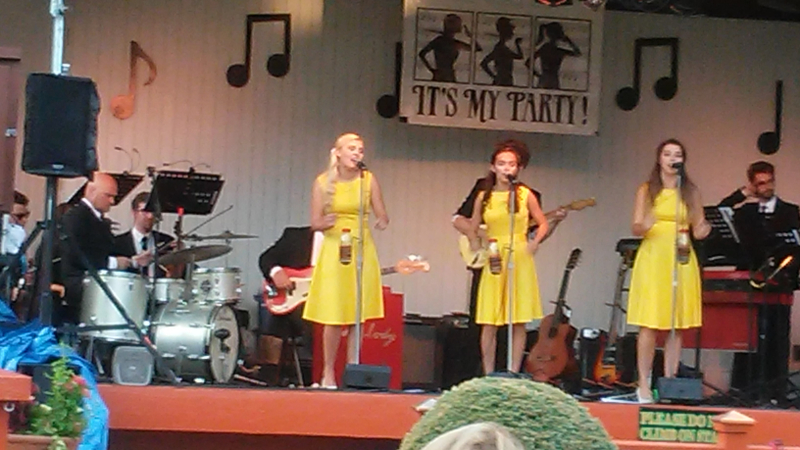 The group is thirty years old, and the female performers have been allowed to ‘age out’ several times so as to preserve authenticity. It is a temporary gig, and everyone knows it going in. Hopefully, those who are students get credit for it somewhere, and I said to my wife that they must be drama or music students, but when I spoke to the oldest singer it turned out that she was an economics student. Some of the performers have gone on to professional recognition. They have toured the country, which somehow came as a surprise to me given its local founder and the age of its participants.

Toward the end of the first set, the girls sashay down and invite persons of the audience to dance through a tune with them. Of course, all the guys in the audience remain firmly ensconced in their lawn chairs, for fear of their wives, as did I, but finally one old duffer whose wife had probably died took them up on it. This prompted a few children to join in also, along with their mom.

Later still, the audience was invited onto the dance stage for another number. It was an unusually docile group of bumpkins present. No one responded, save for one awkward couple who essentially leaned on each other for support so that the two-party pile would not collapse in a heap. Therefore, with plenty of space available, I led the lovely Mrs. Harley (don’t kid yourself – the woman’s a looker) up front to do the slow number and then the performers tricked us into remaining by saying they had another one. The other one was much bouncier and that is what we did – bounce. Seldom, in fact probably never, have we had such floor space to show off our moves, and the girls commended us later, I don’t think patronizingly, but you never know.

When they finished the first set and disappeared I predicted that they would emerge with new outfits. My wife took this as a no-brainer. “Oh yeah. Freshen up. Take a potty break. Have a drink. (Atypically for her: “Smoke a joint. I mean, get real.”) But it is hard to think that these girls would know how to smoke a joint if they wanted to, unlike those at the Grateful Dead tribute band that played on another occasion, where it was hard to believe that they would do anything else. Afterwards, I observed to Sienna, the economics student, that it must be strange for them to transport themselves into a much different age. I mean, these are not exactly feminist songs they are rolling out for the crowds. But she said that the music they were performing was from ‘a better time.’ Maybe she was just placating the duffers and the three collapse on each other in laughter afterwards, but it seemed reasonable to suppose that she was sincere in saying it. Even the duffers in the audience rolled their eyes at some of the corn, for they are not immune to contemporary times, even if they have not fully been molded by them.

This is the third time I have heard the group. The first time, with a different set of singers, was entirely by accident, back when I was working at the group home, and I wrote about it here:

After the meal, we drive over to the Fairport commons area - Liftbridge Park - to hang out a bit. We're in luck. Lots is happening - a classic car show and a live band. I wheel Doug near the band, an all-girl group called It's My Party, who perform songs from the early 60's, and perform them very well. They have matching outfits, just like in the 60's, synchronized gestures, and ... um...some campy 60's dialog between songs. The drummer is their producer, and their website says they have performed for 20 years. How can that be, since the singers themselves are yet high-schoolers? Ah, the producer has been around that long, and maybe some of the backup musicians, of which there are 8 or 9 - are some of them high-schoolers, too? The girl singers have been replaced once or twice.

Many in the audience are older folk - revisiting their youth, one suspects - and after the show, a woman remarks on the lankiest singer's long limbs. "Yeah, it's hard to get clothes," the performer replies. Actually, I thought she said it's hard to get close. That would fit too, for the trio accentuate their songs with 60's cheerleading gestures, arms flailing like windmills.

Doug is captivated by all this. You want to leave? I ask after a few songs. Slight but emphatic shake of the head no. You want to stay? Slight but emphatic shake of the head yes. You want one of their CDs? Yes. So we wait in the lineup, which really isn't wheelchair accessible, and they sign his copy with hugs and kisses - xxooxxoo. Of course, Doug solicits actual hugs and gets them from the girl or two closest to him. Backing out, he keeps it up and gets several more hugs from other girls....you know...girls in the audience, girl friends of the singers, and so forth!

Back at the home I write up a report - they like to keep track of social progress and "if it's not documented, it didn't happen." I tell about all the hugs and conclude with the question: "How does he do that?" I mean, it's not as though anyone offered to hug me. You don’t think I need hugs, too?

Though you cannot see him at all, positioned behind the middle singer as he is, the male guitarist had the most clear voice and playing for covering tunes such ‘Our Last Kiss’ whilst the girl singers wailed accompaniment. Garrison Keillor called such songs ‘teen-age self-pity songs’ and it is not hard to see why:

“The squealing tires, the busting glass, the painful screams that I heard last…

Well, when I woke up the rain was pouring down,

There were people standing all around.

Something warm running in my eyes,

But I found my baby somehow that night.

….She said ‘Hold me darling for a little while,’

I held her tight, I kissed her our last kiss,

Keillor responded with his own ‘dad self-pity song’ in which ‘the car slid through the mud, they heard a sickening thud. “Oh, Daryl,” Janie cried, “Is it bad?” “Yes,” he choked back tears, “it is my mom and dad.”

Daryl cradles his dying daddy’s head to hear this last words….and it is the same drivel that the old man said when he was healthy, matters pertaining to going to college and getting a good education, but also matters more mundane, like changing the oil every 3-4000 miles, and ‘when you go into the fridge to pour yourself some milk, don’t open a new container. Pour from the one already opened.’

Posted at 09:26 AM in Musicians, Rochester, Travelogue | Permalink | Comments (0)