We arrived at Lake Placid and there were so many Russians running around that I thought about hiding the election lest they try to meddle with it. However, it turned out that they were not Russian at all, but Serbian - here in the U.S. on a work visa. They comprised the majority help at several hospitality/dining establishments. I asked my waiter how many hours he worked and he said last week he had worked 85, he not having it so bad as Serbs who could not yet speak English. They worked as many hours washing dishes or the like. He slept with other students 8 to a room (or was it suite?). “They’re nice kids,” said our non-Serbian hotel clerk. I told the waiter about my son, who has been there to Serbia, and says they are the best people in the world. He liked that. You have to be very careful accepting their hospitality, my son points out, because they will give you what they need themselves.

The first thing we did after checking in was to stroll down to the public beach. A few dozen bicyclists were there, plainly preparing for some sort of competition, and I spoke with the young man who had a solid disk rather than a back wheel. He assured me that spoke drag was a big deal in a race and the more aerodynamic you could be the better off you were. Since he was the first person I spoke to, I told him that my money was on him for his triathlon, that would begin with each competitor swimming to a buoy and back.

Next day my wife and I went swimming and he was there. He had a family with him which he introduced (while they were afar) as “thing one,” “thing two,” and “thing three.” I thought this a little odd, but you can’t keep up with every permutation of slang, and maybe this is all the rage somewhere. Overall, my opinion of him improved, even with the “things,” and it had never been poor to begin with. I had just assumed that he was a zealot, and here he shows up as a family man.

I asked him how it went with the triathlon and he told me, matter-of-factly as you please, that he won. It means I won, since I had spoken to him first.

Driving home through the Adirondacks we came across this map of the watersheds. I'm not even sure people knew what watersheds were when I was a kid; you never heard of them. But it is an idea I am drawn to, areas that drain into a given body of water, and it awakens an unconscious urge to unfurl a contour map to figure out the demarcations between them. In the mountains you can expect to encounter many of them, as rivers have their headwaters there. All watersheds are obviously subsets of greater ones, with the entire terrestrial earth being the greatest one of all, draining into the connected oceans. 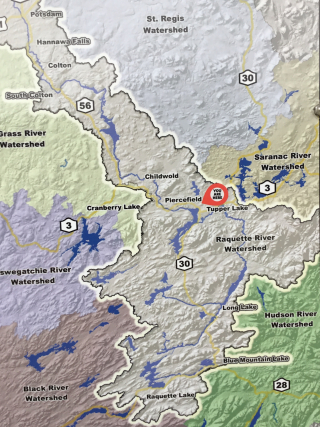