“I Martin Van Buren, of the town of Kinderhook, county of Columbia, state of New York, once governor of the state, more recently president of the United States, but for the last and happiest years, farmer of my native town…” Thus begins the will of Martin Van Buren, and I thought well of the man for having his priorities straight.

I confess I didn’t know much about Martin Van Buren till a recent tour of his home in upstate New York, near the Hudson. More or less, I had assigned him to the list of ‘duds’ who were presidents from Andrew Jackson up to Abraham Lincoln. Upon my excepting Van Buren, the guide let my observation about duds stand, with the observation that no president served more than one term during those years, since “the challenges leading up to Civil War were thought to be unaddressed by those presidents.” It is not for a National Park Service Department of the Interior tour guide to suggest that former chiefs-in-state were duds, and I was content to not be dismissed altogether, for I really don’t know much. As it was, Van Buren lost his bid for a second term to a dud. A depression allowed his enemies to characterize him, a tavern owner’s son educated in a one-room schoolhouse, as the aristocratic high-rolling “Martin Van Ruin,” to his political ruin. However, the dud lived only 30 days before succumbing to pneumonia, which is, in fairness, a little too soon to definitively label him a dud, but his Vice President successor (whose identity escapes me—someone else will have to get on it) was a fellow who was never imagined for the Presidency and is more aptly considered a genuine dud.

The opening film they show you at the visitor center of the Van Buren home is among the most compact language-wise that I have seen, with every line conveying a solid and interesting fact. He was the eighth president of the United States, and the first to be actually born in the country. He was the founder of the first political party, which in time became the Democratic Party. Until then, it was expected that men would come and go as independent gentlemen and would settle their differences unbuttressed by political ‘party.’ In fact, some of them settled their differences through duel, a favorite technique of Andrew Jackson, whom Van Buren served under as Vice President before running for the chief office himself. Aaron Burr famously plugged Alexander Hamilton in a duel, and the guide confirmed as probably true what I had heard—that Hamilton loathed the idea of taking a man’s life and so fired into the air, a strategy not employed by his rival.

The house has a curiously cobbled feel to it, notwithstanding what my cousin (the one who restores original Mustangs) matter-of-factly observed, that there are only so many ways in which you can add rooms to a house. The house did indeed undergo major expansion under the direction of a Van Buren son, and the by-that-time former president writes that he is amused to see what his heir will do with it. Perhaps the feature most ‘clunky’ is the major dining room, which accommodates 18 chairs, and more closely resembles a widened hallway, with no windows, with exterior lighting only on one end and sometimes on the other if the door is opened. There is a chandelier overhead and the guide explained that she would normally have activated it, but an employee had accidentally taken the remote home recently and it had not yet returned. This led me to do my bit for history and suggest that Van Buren would never have allowed use of the remote to prevent just that catastrophe. The cobbled look dissipates once you go to the top floor, where massive bedrooms surround a spacious common area. One room had strewn on the floor toys of the era, which added to the impression that Van Buren did indeed many enjoy his latter enjoyable days in his large home, surrounded with children and grandchildren.

Though the man had once been President, the 1850 census listed his occupation as farmer. There was some sort of a survey form one could fill out at the end for critiquing the tour. I don’t bother with that sort of nonsense when it is business, since most often they are trying to ascertain just how little service they can get away with until customers scream or, more to the point, leave. This one I filled out gladly, however, and dropped it in the mail. I gave it high marks. 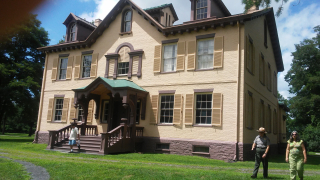 Posted at 08:59 AM in Politicians, Presidents (US) and Statesmen, Travelogue | Permalink | Comments (0)