Home Archives Profile Subscribe
Moses Strikes the Rock and Draws Water in a Rebellious Age
Climate Change and Global Warming: To Be or Not to Be?

Cincinnati one hundred years ago was a low-lying bowl of pollution. Doctors told William Howard Taft’s parents to move high on the perimeter hills for the sake of his mother’s lungs, but she died soon after anyway. Driving past those hills one hundred years later in the course of our Cincinnati visit, we spotted the sign pointing up to his childhood home on Mount Auburn, now a National Historic Registry site with park rangers who do not go outside without donning their distinctive ranger hats. 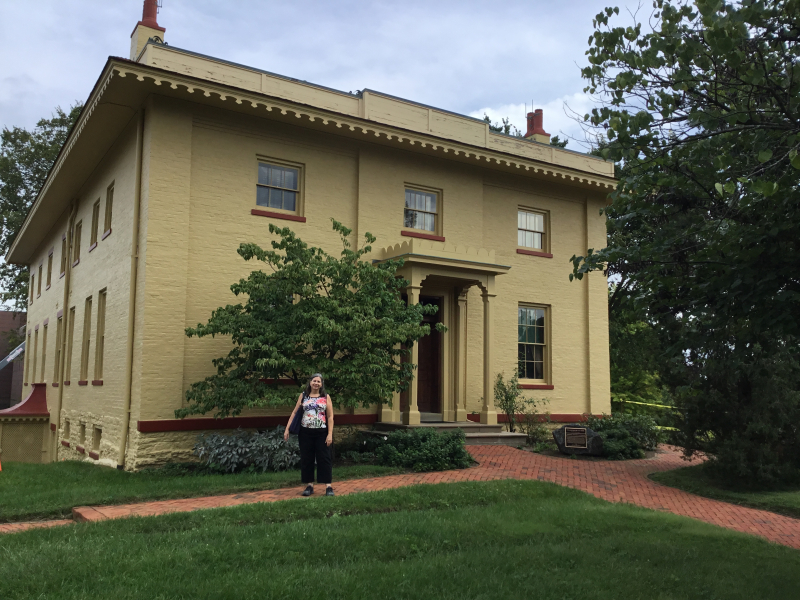 Taft, the 27th president, is not a well-known president, and one can commiserate with the rangers for the misfortune of not having been assigned a more famous person. Still, I ventured as a consolation, they probably do not have to unspin the apocryphal stories of self-styled experts who ‘know’ this or that bit of nonsense about Washington or Lincoln. They don’t, the guide acknowledged, but the reality is worse: self-styled experts don’t bother with Taft, leaving only the genuine experts, some of whom enjoy playing ‘stump the ranger.’ Our ranger confessed that she didn’t like that game.

Don’t tell Cincinnatians that their president was a nobody. Being mid-westerners not inclined to be overly full of themselves, they will concede that he did not exactly hit a grand slam in the game of fame. However, Cincinnati is Taft town, with multiple roads and institutions bearing the surname. William comes from a civics-minded family, and several generations right down to the present have served in political office. One grandson is featured below beside his unusually modest car for a Yale educated graduate. But politicians have been known to be ever-conscious that they are in the public eye, and perhaps his Ford Maverick is an attempt to reel in the suckers with this bit of proof that he, like them, is but a regular guy. Upon reflection, you may discover even before the locals do that William might have become a heavy hitter had not his former mentor and friend returned from shooting elephants in Africa to turn adversary and run against him, splitting the Republican ticket with his newly formed ‘Bull Moose’ party. Had it not been for that, Taft would have won a second term in 1912 and Woodrow Wilson would not have become president. Since Taft was staunchly anti-war, perhaps the U.S. would not have entered the Great War, later rechristened World War I when there proved to be a sequel. William Taft is unique in that he is the only person to have headed two branches of government. Eight years after his presidency he was appointed Chief Justice of the Supreme Court by then-President Harding. Continuing to work after the presidency has not happened during my lifetime, but our guide pointed out that the monitory rewards of the job were not that great at the time, still reflecting the ideals that persons in government would serve for a relatively short time before returning to private life. It is the same reason that Martin Van Buren, whose home I also visited, is listed in a post-Presidency census as farmer in his New York State community.

Word association being what it is, one wonders if Taft does not subconsciously suffer in the public eye due to his name rhyming with graft. If anyone will blow that ‘science’ out of the water, he will. Consistently we read of an impeccable character. For example, an interpretive poster on display at the home reads: “Campaign financing was an issue because of the fear that big corporations were corrupting politics for their own ends. Taft personally turned down questionable campaign contributions. Roosevelt, somewhat less fastidious, wrote to him “I have always said you would be the greatest President, bar only Washington and Lincoln, and I feel mighty inclined to strike out the exceptions. My affection and respect for you are increased by your attitude about contributions. But really I think you are oversensitive” in this matter, and the rift between the two men, once BFFs, began when Taft began to regard with suspicion some of Roosevelt’s Big Business friends. 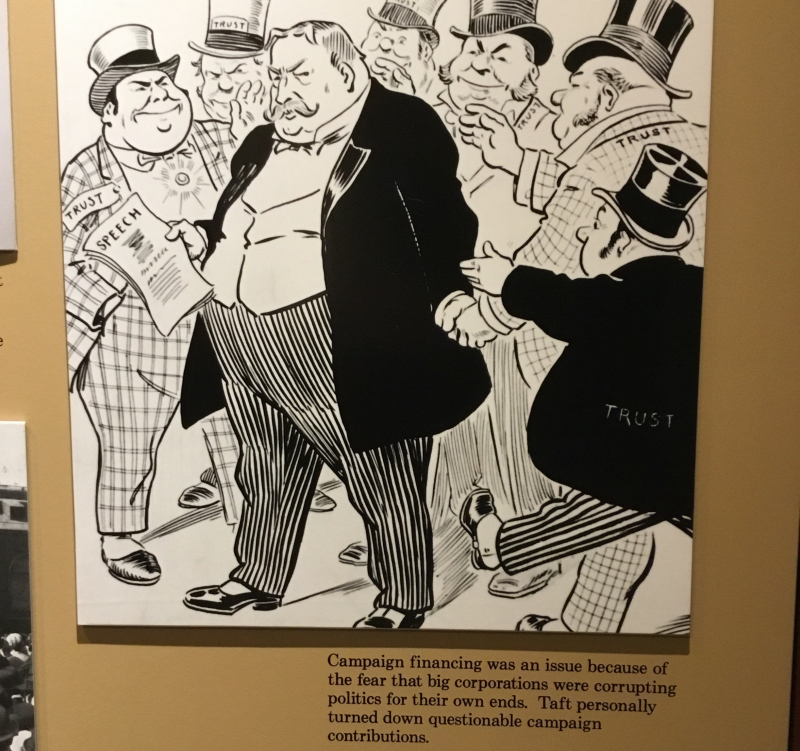 Anti-corruption ran in the family. Despite his father Alphonso’s being in the doghouse locally, he was appointed to a position on Ulysses Grant’s cabinet, since he was “as honest as the day is long.” The ‘doghouse’ came because, as Justice of the Cincinnati District Court, he ruled against inclusion of the King James Bible in public school curriculum. He was forever labeled irreligious, but his concern was, ‘What of the Catholics and Jews who used different texts?’ He didn’t want to elevate one branch of religion at the expense others. Our ranger guide said he probably would not have had a problem with the curriculum otherwise. It was a decision he remained ever proud of.

One of Alphonso’s law students, a black man, George Washington Williams, went on to become an Ohio politician, historian and diplomat, and had high words of praise for Alphonso as he seconded his nomination for governor in 1879: “Judge Taft, the only white man in the cabinet of any President during the last eighteen years who had the manhood, the temerity and humanity to exact the powers of the Constitution of the United States to protect the black man in the re-exercise of his constitutional rights.”

The William Taft home, high upon the hill in North Cincinnati, doubled in space soon after the boy Taft, his siblings and parents moved in; eight rooms for six people proved too tight for an upper middle class family. The addition results in an odd interior design of a stairwell running straight up to the second floor meeting an inline one running straight down. The house was sold in time to one owner after another as the area declined, and the latter owner converted it into apartments. When the National Historic Society bought it back, they managed to strip several layers of wallpaper to uncover the original, which was in bad shape, but from it an exact replica could be made. 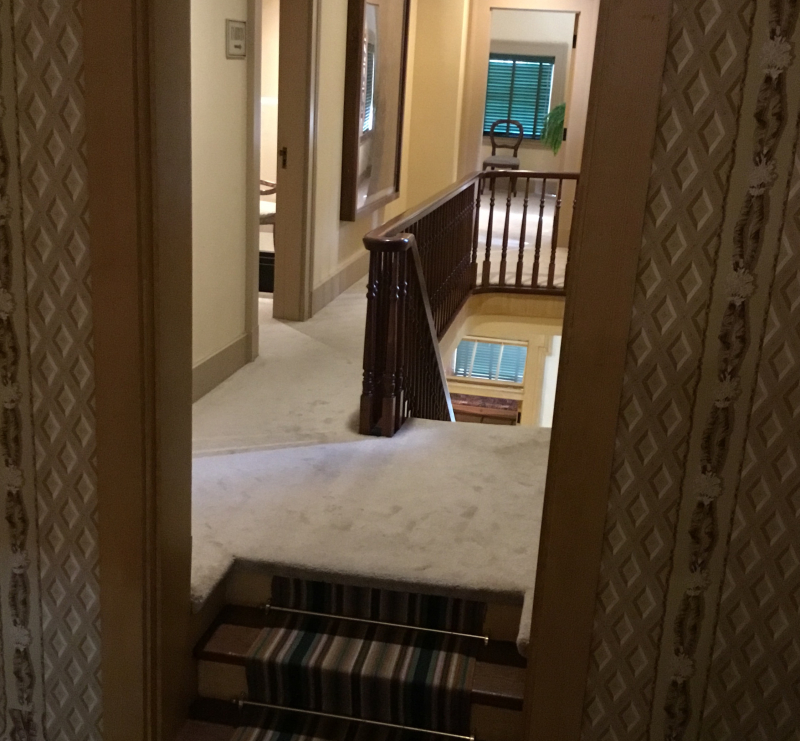 Can an honest man be truly happy in politics? “Taft was ambitious, but it almost seems that he ran for the Presidency to satisfy his supporters rather than himself,” says an interpretive poster at his old home. William’s mother had forecast that, “the malice of the politicians would make you miserable,” and he himself confessed to his wife, ‘politics, when I am at it, makes me sick.’ It is little wonder that after the presidency, he himself dove into the world of the Supreme Court, where he could referee and straighten out some of the messes that his former cohorts made.

Posted at 12:09 PM in Politicians, Presidents (US) and Statesmen, Travelogue | Permalink | Comments (0)