Moses Strikes the Rock and Draws Water in a Rebellious Age

“Finally, Moses cried out to Jehovah: “What should I do with this people? A little longer and they will stone me!” as the Israelites went online and complained 24/7 over everything under the sun. It is an update Exodus 17:4 into the present. Though the July 2018 Watchtower article entitled ‘Where are Your Eyes Looking?’ nowhere makes the connection, beyond a vague reference to those having ‘a measure of responsibility in God’s organization,’ which everyone took as a reference to congregation elders, I couldn’t help but think the ones of the Governing Body had themselves foremost in mind as beneficiaries of the counsel offered.

It is not as though I have any special insight. It is just that I hang out on the internet a lot and I hear all the grousing going on. It is not necessarily to my credit that I do this. It may be like the impression you get from hearing Trump and Obama people scream online at each other day and night but then you go into the real world and you find that people get along with each other tolerably well despite differences, and it is just the internet that gives a skewed picture.

Much was made of the instance in which Moses produced water from the rock at God’s direction. He did it twice, something that I had forgotten, if I ever knew it in the first place. The first was months after crossing the Red Sea, during a time when there was so much muttering over lack of water that Moses in frustration cried out the words above. It didn’t occur to them that the God who slammed Egypt with ten plagues and parted the waters, closing them upon the army in pursuit, could solve the problem of a drought. Jehovah told Moses to strike a rock. Moses did, and water gushed out. (Exodus 17)

The next instance was almost 40 years later, and the people seem to have worn Moses down, what with constant bellyaching and occasional rebellion throughout the interim. This time when they started complaining over the same thing, Moses lost it. “Hear, now, you rebels! Must we bring water for you from this crag?” and struck the rock twice, after which water again gushed out. But God didn’t like what Moses had shouted. Much later Psalm 106: 32-33 says, ‘They provoked him at the waters of Meribah, and it went badly for Moses because of them. They embittered his spirit, and he spoke rashly with his lips.”

Look, if you approach the speaker after a good talk and tell him it was a good talk, he will as often as not say something to the effect that it is not really him who should get the credit, but Jehovah. He says that even though people are capable of speaking all by themselves without any help at all from Jehovah. So what about someone who takes full credit for doing what no human in a thousand years could do? It is what Moses did. Yet that’s what can happen when the scoundrels are nipping at your heels day and night for forty years. This last bit of correction from God, that Moses as a result of his outburst would not be the one to take his countrymen into the promised land, strikes the average reader as pretty harsh. Yet it is entirely in harmony with ‘to whom more is given, more will be expected,’ and ‘he will finish your training; he will make you firm.’ Moses, like everybody else, is being trained for the real life, not this transitory one.

Notwithstanding that the internet is the perfect breeding ground for complainers, one has to ask. ‘What is it with all these malcontents?’ It is as though kicking against the goads is the order of the day, seen everywhere. Acquiescence to the authority of the parent, the teacher, the counselor, the coach, the boss, the consulted advisor, the party leader, the union steward, and those taking the lead in the congregation was once an entirely unremarkable fact of life; today it is selling out one’s soul. I begin to imagine the GB posting God’s rebuke to Moses as their own personal yeartext, in hopes that they do not also lose it one day kicking back at the grumblers.

God counted that complaining about Moses as complaining about Him. “When your forefathers tested me; They challenged me, though they had seen my works,” reads Psalm 96:6. ‘Yeah, well, they’re no Moses,’ I can hear the retorts already, ‘Where are their comparable works? What Red Sea did they lead anyone though?’

No, I think people should think very hard before they go there. The human component of the divine-human interface is always the sticking point. It is even so with Judas. He and God were tight; there were absolutely no problems there. But that fraud that claimed to be the Messiah! That was just too much for Judas.

Observing that literal food and drink prefigures the greater spiritual food and drink, the accomplishments of the Witness organization today are nothing short of amazing, The average person of a developing nation is stuck with some 200 year-old turkey of a translation that he can neither afford nor understand because those in the church world think it only natural that Big Business be entrusted with the distribution of God’s word. Only Jehovah’s Witnesses devise an entirely separate channel to place a modern understandable translation in his hands at minimal cost, even free. The Bible satisfactorily answers questions that are answered nowhere else, the deeper questions of life such as ‘Why would God permit suffering, why do people die and what is the hope afterward, and what is the ultimate purpose of life?’ Although this fellow may not have a nickel to his name, he has access to the answers no less than someone in more affluent lands, some of whom count it as nothing as they grouse about matters of personal inconvenience.

It is not nothing. However, when people become obsessed with their own immediate needs and wants, it can become as nothing. I don’t dare do it: simply become a whiner over present inconveniences. There are some inconveniences, of course, in pursuing a united service to God today, but to carry on excessively about them seems to me a reality not too far off from Moses in Sinai. In any organization there is a chance that a given decision will not go your way. Should organization be jettisoned on that account? It is exactly what opposers would wish. That way individuals flail away, accomplish little, and can likely be absorbed in time by the popular cause.

Obviously if you take away the upside there become nothing left other than to bitch about the downside. The rage today of the young is to go atheist. Who smoothed that path for them? However, when they come around complaining about the ‘restrictions’ they have broken free from, always ask them what they have found that is better. What is it that they have to offer? Are they not just ‘promising them freedom’ while existing as ‘slaves of corruption’? What do they have to offer? Simply the freedom to do whatever one wants without check? History shows that freedom has not worked out particularly well for humankind. 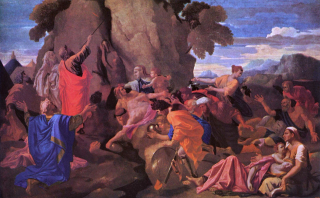