Home Archives Profile Subscribe
Are We Looking at Insurance Fraud? Part 3
Is it Time for Jehovah's Witnesses to Apologize? Part 1

Offering my Sacrifice to the Gods

Volkswagen is ending production of the New Beetle, first begun in 1997. That beetle was the reincarnation of the original Beetle, which was itself ended in 1978. Every hippie on earth drove a Beetle back in the day.

It’s time. It is a smart move on Volkswagen’s part, for reasons beyond mere sales. With people routinely screaming that their opponents on anything are ‘like Hitler,’ you know it is only a matter of time before a company offering a car that actually was inspired by Hitler is subject to wrath itself.

I never owned a Beetle, but a friend did. My car was a 64 Rambler Classic station wagon. I decaled a bumblebee stripe around the rear end, wagon and all.  Sometimes we took my car and sometimes his as we explored the old logging roads in the Adirondacks during college days. Many of those roads would disintegrate into pure forest when they reached back far enough.

Emerging from a quasi-road onto a dirt road only slightly more real, my friend, who was driving, asked: “Anything coming your way?” “Just a school bus,” I said, and he laughed, for we were in the middle of nowhere. He pulled out and a school bus took off his front bumper.

I did have a Kharmann Ghia afterwards, which was a sportier Volkswagen offering, and I have two memories of it. The first is when I was alone with it performing the same house-to-house ministry I do now, decades ago when I was much dumber than I am now. Now, VWs barely heated at all. So I had gotten it into my head that maybe a portable kerosene heater would be a good idea; I could roll the windows down a bit for the fumes. As I do even today, I waited till I actually needed it, on one frigid suburban street, to try it out. I didn’t want to fire it up right there in the car. At least credit me with not being that dumb. I lit it outside, and a two-foot high flame shot into the air because I had not done it right. What would any homeowner glancing out the window have thought? “Oh, man, another religious nut, this one offering sacrifice to the gods!”

The other memory that lasts of my Karmann Ghia is when I pulled into my folk’s drive right behind their station wagon. No sooner had I shut the engine off than the backup lights of wagon ahead came on and my brother launched out and into my headlights like a rocket for Saturn. This is the same brother who took my stamp collection and who cheats at Scrabble. I didn’t have a lot of dough back then, so I fiber-glassed over the two gaping holes and bought two truck-mounted headlights and mounted them between front side fenders and hood. The car looked like a frog. I drove it in field service afterwards until I got rid of it, but I was always careful to avoid the street in which I had sacrificed to the gods. 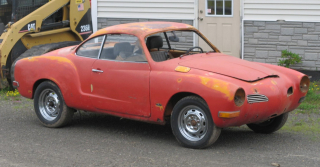 Posted at 10:53 AM in Business, The Sheepandgoats' Family | Permalink | Comments (0)