Home Archives Profile Subscribe
'Hey Guys, Remember That Report We Made That Gave You All Wet Dreams? We Made it Up. Sorry.'
Is it Time for Jehovah's Witnesses to Apologize? Part 2

First of all, here is Part 1

Pawdaymu is an American sister serving as a need-greater in Myanmar. I know her parents well and I have watched her grow up. As is frequently the case with our young, particularly our zealous young, she got so many followers on Instagram that she had a hard time keeping up. She wanted to jettison some, but she didn’t want to hurt anyone’s feelings. Particularly trying to her were some who had left the faith, some of whom, in time, began to post pictures of themselves such as might appear in the Watchtower magazine depicting ‘the world.’ It’s up to them if they want to go that way, Pawdaymu is not judgmental. She is not wound up to tight because her dad is not wound up too tight, and when a student asked her: “Will only Jehovah’s Witnesses be saved?” she said, “Well, I’m not Jesus, and I don’t know.” No, they can go there if they want, but they do put themselves lower on her Instagram priority list, which is already too long. So she vanished as a person under her own name, but resurfaced as Pawdaymu, a not uncommon name in Myanmar, which means ‘little sister flower. It didn't really fool anyone. Her ruse was discovered in no time at all, word got around, and she may now have more followers than before.

Her American friends come to visit in Myanmar and the husband is a sensation. Of Edward, the host Karen brother travels to the friends’ homes and announces: “Negro American coming! Negro American coming!” Presently Edward tells him that it’s not how they do it in America, it’s not considered polite. ‘Oh,’ the brother says, much distressed that he has done it wrong. ‘Well, what do you call yourself?’ and Edward says ‘black.’ It is not a consonant sound employed in that language and so the brother draws it out, try to get it right. “BLLLLAAACCKKKKKKK American Coming! BLLLLAAACCKKKKKKK American coming!” he says. “Negro works fine,” Edward finally tells him.

Edward is also huge and he towers over his Karen hosts; the Karen are a tiny people. They typically have bamboo ladders leading up to their homes on account of monsoon season, and he breaks a rung while climbing. Much abashed and apologetic, he takes to clambering around on all fours to better distribute his weight, and he carefully chooses the support beams. One can only imagine what they do with that image.

Is it only black brothers who create a stir among the humble people who rarely see anyone not their own? Pawdaymu and her husband ride a crowded city bus which stops to pick up yet another passenger. On spotting them, he cries out: “Hey, there’s white people on this bus!” Pawdaymu’s husband is not shy, and he instantly hollers: “White people! Where?” This sets the place in stitches and causes the man much embarrassment; never did he dream that a white person would speak the language. But Pawdaymu’s husband is personable and he puts the fellow at ease. In the end, he places him a brochure on family themes and the man passes it throughout the bus.

They are immensely appreciative there that outsiders would willingly accept much lower standards so as to dwell amidst them in order to teach the Bible. As Pawdaymu conducts one Bible study with a woman, her husband melts in the corner, for it is almost 100 degrees. This alarms the woman, who insists on fanning him. Next, they must go to a nearby village where he will conduct the study and the woman insists upon coming along, fanning him all the way. “The teachers are here!” she cries as they approach, and she fans him throughout the study. You cannot break them of this, treating visitors like kings. It harkens back to Pawdaymu and her husband catering to the same ethnic group in America. They enter for the pre-arranged study and sit on the floor, like their hosts. This sends the latter into a panic. “No!” they cry. “You must sit here,” pointing to the chair. “That is where the leader sits.” No amount of protest will dissuade them. So Pawdaymu and husband sit on the chairs and slide down onto the floor during the course of the study. 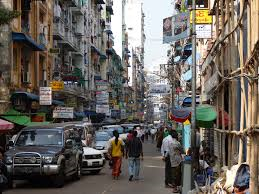