Home Archives Profile Subscribe
Building Emotional Health
Who is a Cult? Just About Everybody, it Turns Out. Part 2

Are There Any So Intolerant as the Anti-Cultists?

Few are unaware that the Bible climax depicts the epic battle between good and evil, even if they know it in but inkling form. It is the subject of the final Book of Revelation. Foreglimmers of it appear in several other places.

The contest, to zero in, involves the choice between human rulership and divine rulership of the planet. The former is expressed in the present reality of two hundred eternally squabbling nations. The latter is expressed in the ‘Lord’s prayer,’ as God’s kingdom, which, when it “comes,” results in God’s “will be[ing] done on earth, as it is in heaven.” Human rulership of the earth has not been such a stellar success that those who point to God’s government as the one true hope should be run off the road.

As with the Don McLean song, “the marching band refuses to yield.” Though it involves no human agency, God’s kingdom forcibly is to replace human rulership. It does not wait for “the broken-hearted people living in the world to agree,” for they never will. Daniel 2:44 says it succinctly: “The God of heaven will set up a kingdom that will never be brought to ruin. And the kingdom itself will not be passed on to any other people. It will crush and put an end to all these kingdoms, and it itself will stand to times indefinite.”

This can be dicey to express in literature. Still, it has been expressed as long as there have been persons longing to see a final end of evil. One recent offering is from the book Pure Worship of Jehovah Restored at Last, produced by Jehovah’s Witnesses. The writing gets downright heavy toward the end. For example:

“During the war of Armageddon, Jehovah will execute people, not in a cold, clinical manner, but in a “great rage.” (Read Ezekiel 38:18.) He will direct the explosive force of his anger, not against one army or one nation, but against countless individuals living across the globe. On that day, those slain by Jehovah “will be from one end of the earth clear to the other end of the earth.”​—Jer. 25:29, 33.”

The Bible verses cited are, from Ezekiel:

On that day, the day when Gog invades the land of Israel,’ declares the Sovereign Lord Jehovah, ‘my great rage will flare up. In my zeal, in the fire of my fury, I will speak…all humans on the surface of the earth will tremble, and the mountains will be thrown down, and the cliffs will fall, and every wall will collapse to the ground.’ “‘I will call for a sword against him on all my mountains,’ declares the Sovereign Lord Jehovah. ‘Every man’s sword will be against his own brother. I will bring my judgment against him…”

“‘You will not go unpunished, for I am calling for a sword against all the inhabitants of the earth,’ declares Jehovah of armies. …“‘And those slain by Jehovah in that day will be from one end of the earth clear to the other end of the earth. They will not be mourned, nor will they be gathered up or buried. They will become like manure on the surface of the ground.’

That’s not very pleasant, is it? Let no one accuse the Bible writers of beating around the bush.

Is it too much? Should the Bible be banned, as it is clearly the fiery source material for such paragraphs as in the Watchtower publication? Ought one side in this epic struggle be allowed a preemptive strike so that the view of the other side be muzzled? Is it the sign of a “cult” not to interpret such passages away?

Should the view that God might be displeased, even outraged, at the present state of the planet be outlawed? Should the only view allowable be that he cheerleads for the present world, having his feelings hurt with each new atrocity, to be sure, but quickly rebounding with the chipper hope that if his creatures but elect the right set of leaders, all will be well? Should only that neutered view of God be allowed to stand, and any view that God might actually do something about the state of the world be consigned to the state of fanaticism, even if ones reprioritize their lives based upon such views?

Taking their place among the most intolerant people on the planet are the “anti-cultists.” Religion they will allow so long as it does not forget that its place is to reinforce the status quo. ‘If religion helps you to be kinder and gentler, so be it,’ they seem to say, ‘but don’t go rocking the boat. Human leadership is where it’s at—if your god can come on board with that, he’s welcome, but only if. There may daily be discouraging checks, but they are not checkmates, and don’t go bringing any nutty religion into it saying that final checkmate looms ahead.’

What’s it to them, anyway? If the verses are to become reality, then Jehovah’s Witnesses offer a fine head’s up and an opportunity to sidestep the trouble. If they are not to become reality, then there is no harm done other than egg on the faces of those announcing it. Jehovah’s Witnesses will take that chance. The Bible is still the most widely distributed book on earth, by a huge margin. Not all will consign it to the dumpster when they hear of such fiery passages. Some will be more like the Hebrew king Josiah of long ago:

It will ever be the minority view. But only the anti-cultists seek to banish it, so as to keep everyone on the same page of human rulership. For Jehovah’s Witnesses, who unapologetically choose God’s rulership over human rulership, “the wicked” will primarily be those who clearly see both sides and decisively choose human rulership—abysmal track record and all. It will not be those with only a hazy concept of one or both. It will be those who know what they are choosing. 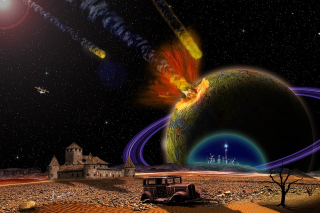