A Jungian Answer to Job

I’ve said nice things about Carl Jung on my blog before. For example: “The next time I need my head examined, that’s the kind of guy I’ll seek out, rather than some modern-day critical type who declares: ‘First thing we have to do is get rid of this nutcake religion!’” I’m not sure how many do that—most recognize that value of faith—if only for the community that often comes with it, but it seemed a good line.

Not only does Jung acknowledge that there is a spiritual side of things, but he maintains that the spiritual side is the more genuine, the more real, the more true. The “statements of the conscious mind,” he says, “may easily be snares and delusions, lies, or arbitrary opinions, but this is certainly not true of statements of the soul.” However, these latter statements “always go over our heads because they point to realities that transcend consciousness.”

The “inferior” statements of the conscious mind, which initially seem persuasive, but in reality may prove to be “snares. delusions, lies, or arbitrary opinions,” are not limited to the conscious mind of the individual, but include entire populations, movements, nations, and eras. Doesn’t history continually bear this out? Nor do I think for one second that the modern day “age of science” will remedy this woe. Science gives us iPods and iPads but doesn’t teach us how to get along with each other.

I like Jung. I like his writings on extroversion and introversion. I like his analogy on how the perspective of the rising sun differs from that of the setting sun. I like his work on personality types. His insights are the driving force behind those ubiquitous vocational tests that counselors foist upon us, in which you answer nosy-type personal questions, and they tell you what you ought to do for a living. Moreover, you have to be careful critiquing Jung, since he is a Great Man, and you are not. If he writes something spiritual with which you disagree, upon what basis do you disagree? “The Bible “says what it means and means what it says?” Be careful. You don’t want to come across as some Bible-thumping redneck.

But sometimes, even with Jung, a guy has to stand up and say: “The emperor has no clothes!” Such is the case when Jung starts analyzing the Book of Job, which he does in ‘Answer to Job,’ published in 1952.

Now, one has to know going in that, if Jung believes in spiritual things, that does not mean he is believes in any given set of scriptures. Rather, he maintains that certain spiritual legends and myths are universal; they are to be found in our “collective unconscious.” Furthermore, they pop up continually as wisps and ghosts and hints in various places, the Bible being but one.

To briefly set the stage for the story of Job:  he is set up as an example—a test case, as it were, to settle the question of whether man can keep integrity to God under adversity. Satan, who appears only in the first two chapters of the book, charges that he will not: “Skin in behalf of skin, and everything that a man has he will give in behalf of his soul. For a change, thrust out your hand, please, and touch as far as his bone and his flesh [and see] whether he will not curse you to your very face.”

God takes him up on this challenge and gives Satan permission to raise all manner of chaos. In short order, Job loses all he has, including even children. Too, he is struck by a painful sickness; chapter after chapter describes his suffering. Job’s three seeming-friends come to visit, supposedly, to comfort him. As time goes on, though, the comfort turns into accusation. ‘You know,’ they point out, ‘God doesn’t punish people for nothing. If you’ve fallen on hard times, it must be your own fault. Yes, you may have seemed upright outwardly, but God knows a scoundrel when he sees one! He knows your true worthlessness and so he’s settled the score.’ They merely hint this at first, but as Job protests his innocence, they become more and more strident, till toward the end, they’re fairly hurling epithets at the poor fellow.

Now, Job is unaware of the Satanic challenge. He hasn’t the least notion as to why he is suffering, nor does he have any indication that it will end. But he does know that he’s done nothing to “deserve” it. Goaded on by these false friends, he gets increasingly heated declaring his innocence, hinting at first, then hinting more strongly, finally outright accusing God of villainy. Yes, if he could confront God face to face, he’d show Him who was in the right and who was moral! He’d argue his case—it was irrefutable—and God would have no choice but to back down! Job lets fly under his intense suffering and the provocation of his pals. Who hasn’t been there before: doing something we would never do otherwise but for the goading of others?

Toward the end of the book, he gets his wish! God does speak to him! But not to be reproved by him. Rather, God poses a long series of questions to Job that serve to readjust his thinking. Afterwards, health and possessions are restored. Job has successfully answered Satan’s challenge—a challenge he never knew existed in the first place!

Now, there are many things that annoy me about Jung’s commentary on the book of Job. In fact, almost all of it does. Why does Jung have to put the worst possible spin on everything? For example, with regard to when God manifests himself to Job, Jung writes: “For seventy-one verses he proclaims his world-creating power to his miserable victim, who sits in ashes and scratches his sores with potsherds, and who by now has had more than enough of superhuman violence. Job has absolutely no need of being impressed by further exhibitions of this power....Altogether, he pays so little attention to Job’s real situation that one suspects him of having an ulterior motive....His thunderings at Job so completely miss the point that one cannot help but see how much he is occupied with himself.”

But isn’t it Jung who completely misses the point? Why not phrase matters as the Watchtower does (October 15, 2010, pg. 4)? “During his time of suffering, Job struggled with despair and became somewhat self-centered. He lost sight of the bigger issues. But Jehovah lovingly helped him to broaden his viewpoint. By asking Job over 70 different questions, none of which Job could answer, Jehovah emphasized the limitations of Job’s understanding. Job reacted in a humble way, adjusting his viewpoint.”

There! Isn’t that better? I mean, before you go telling God how to run the universe, ought you not be able to answer at least one of the seventy questions? Issues were swirling about which Job knew nothing. Isn’t that always the case with humans on earth? “For the true God is in the heavens, but you are on the earth. That is why your words should prove to be few,” is a verse one is wise not to contest. (Ecclesiastes 5:2)

And do not carry on about God bullying Job while he is in abject misery as though holding a captive tortured audience through a boring speech. An appearance by God will always make your day. It overrides all else.

Furthermore, Carl Jung presents the entire matter as though it were a friendly wager between God and the Devil, serving no purpose other than their amusement, treating as nothing the intense suffering Job goes through. Why does he do that? It’s Jung who completely misses the point that Job is a test case to establish that man can keep integrity to God under the most extreme conditions.

For, the fact is, people do suffer intensely at times. And when that occurs, some are inclined to blame God. Should they? In its opening chapters, the Bible spells out how mankind came to be in it’s present sorry state. In its closing chapters, it spells out how matters will ultimately resolve. (Abundant) supporting details are in between. Make a search of these things, and you’ll find why God is not to blame for human suffering.

Now, drawing conclusions from his own ‘Answer to Job’ analysis, Carl Jung observes regarding evil: “We have experienced things so unheard of and so staggering that the question of whether such things are in any way reconcilable with the idea of a good God has become burningly topical. It is no longer a problem for experts in theological seminaries, but a universal religious nightmare...” Jung wrote this book in 1952. What unheard of and staggering evil do you think he had foremost in his mind? Take a guess. Hint: the Nuremberg trials, which brought justice to some Holocaust Nazi criminals, took place in 1945-46.

Perhaps the most sadistic example of mass suffering in history occurred in Nazi Germany a mere decade before Jung wrote his book. Entire populations were herded into concentration camps, where many were gassed, starved, beaten, or otherwise worked to death. Twelve million died. The ones who survived left as walking skeletons. When General Dwight Eisenhower liberated Germany at the close of World War II, the mayor of a certain German town pleaded ignorance. Enraged, Eisenhower forced him to tour the nearest camp, he and the entire town’s population. Next day, the mayor hung himself.

Among those imprisoned were Jehovah’s Witnesses. They were unlike all other groups in that they alone had power to free themselves. All they had to do was renounce their faith and pledge cooperation with the Nazis. Only a handful complied, a fact which, 70 years later, I still find staggering.

“In concentration camps, the Witnesses were identified by small purple triangles on their sleeves and were singled out for special brutality. Did this break them? Psychologist Bruno Bettelheim noted that they ‘not only showed unusual heights of human dignity and moral behavior but seemed protected against the same camp experience that soon destroyed persons considered very well integrated by my psychoanalytic friends and myself.’”

Why didn’t the well-integrated psychoanalytic-approved prisoners hold up? Probably because they read too much Jung and not enough Watchtower. Not Jehovah’s Witnesses. They were not hamstrung by having been nourished on Jungian theology. Job meant something to them. It wasn’t there simply to generate wordy theories and earn university degrees. A correct appreciation of it afforded them power and enabled them to bear up under the greatest evil of our time, a mass evil entirely analogous to the trials of Job. They applied the Book! And in doing so, they proved the Book’s premise: that man can maintain integrity to God under the most severe provocation. Indeed, some are on record as saying they would not have traded the experience for anything, since it afforded them just that opportunity

So Carl Jung, in the Holocaust’s aftermath, stumbled about trying to explain how such evil could possibly occur, and could do no better than endorse the view already prevailing among intellectuals that the God of the Old Testament is mean whereas the God of the New Testament is nice. He ought to have spoken to Jehovah’s Witnesses. The latter didn’t experience the Holocaust from the comfort of their armchairs. Those in Nazi lands lived through it, due in large part to their accurate appreciation for the Book of Job. (February 2011) 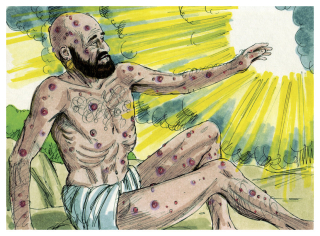 Posted at 12:39 PM in Holocaust, TrueTom vs the Apostates | Permalink | Comments (0)