Daily my adversary hammers at the door of women’s rights groups, hoping that they will cooperate with him in his efforts to make trouble for his former religion. He calls it a vigil, tweeting every 24 hours that yet one more day has passed since The Watchtower (December 2018) published advice harmful to women’s interests. This strikes me as an extraordinarily disrespectful thing to do: to bludgeon them each day, as though he understands their cause better than they. If they don’t take the bait, they don’t take it.

Lately he modifies his approach and says that he “respectfully asks” that they give attention to his beef. He changes tactics because so many of his own people began to accuse him of “man-bashing” that he took to blocking them. When I read he was doing that, I thought it was because of me. However, I had been behaving myself lately, so I returned to investigate, and I saw that it was some of his own people kicking back.

I think it will turn out as when the ever-capable female British intelligence officer commented to Foyle, of the television show Foyle’s War, about the full-of-himself male officer that she, for the time-being, had to play second fiddle to: that he was overconfident and not really too smart. He would overreach and fall of his own weight. She had seen it before. Am I not at least as much in tune with women’s interests as is my adversary? Have I not several times written: “The question to ask in any discipline is not: ‘Can women do it better than men?’ It is ‘How can they do it worse?’”

It is a single paragraph that he takes issue with, a paragraph that deals with woman finding themselves in abusive relationships. As he puts it: “In a section discussing marriages between Witness women and ‘unbelieving’ husbands, the magazine urges the women not to get a divorce under any circumstances partly because they could influence their husbands to convert. Apparently, that possibility is supposed to carry them through any and all problems in the relationship, including physical abuse.” The reason he uses the word “apparently” is that the article does not say what he wants it to. With an ‘apparently,’ all things are possible. He is “obviously appalled” at his own interpretation of the Watchtower article and hopes the women’s rights groups will be, too.

If the background facts were as he represents, one might concede that he has a point. But the background facts have been misrepresented in almost every case. I wrote up a reply and also sent it to these groups, though not every day. Even Jehovah’s Witnesses do not call every single day. The jury is still out as to which version they will prefer. Possibly they will say, “If we never hear again from either one of these two clowns, it will be not soon enough.” We may never know. After 52 days of pummeling, he discontinued.

The Bible that he now derides shows unusual respect for women, relative to its time of writing. Two examples follow. Both involve Jesus’s relationships with women. In themselves they are not decisive; one could easily say that they do not go far enough. However, in the context of the times, they are monumental. The Lord did not stamp out every injustice he encountered during his brief time on earth. Little would remain if he had. He mostly worked within the existing world as the laid down principles that would facilitate a better reality to come.

The Samaritan “woman at the well” that Jesus spoke with was the first person to which he entrusted directly the news that he was God’s chosen Messiah. Even his disciples had to jump through hoops to gather that bit of intelligence. From a Christian’s point of view, it the most significant announcement of all time. He told it to a woman (John 4:26). Moreover, she was not a woman with society’s stamp of approval. She was a woman who was “living in sin.” Woman’s groups today may disagree with definitions and values of that time, but they will nonetheless accede that Jesus first gave the most important news of all time to a woman of “ill repute” but underlying fine heart that only he could detect.

The second example is found with the angel that announces Jesus’s resurrection. Who does he entrust this second most important announcement of all to? Again, it is a woman. (Luke 24:4-11) At the time, the testimony of a woman was considered worthless in that male-dominated Greek, Roman, and yes, even Jewish world. Didn’t the angel show contempt for that male-dominated society by completely skirting it? Even Jesus’s disciples, immersed in that culture, did not believe the women. That was of no consequence to the angel; they’d figure it out in time, the big dopes.

Update to the present. The intent of detractors today is to paint Jehovah’s Witnesses as obsessed with the “submission” women are supposed to show to men. To the extent the religion, or the Bible, speaks of submission, it is essentially to acknowledge that in any ship, there is a captain. In the Christian model, God has assigned roles as best suited for the stability of the family, which for the most part, means the stability of the human race. There is no tolerance made for abuse. That is not to say that abuse has not occurred, but it occurs no less in places wanting nothing to do with Bible principles. Unless I am very mistaken, Harvey Weinstein did not go door-to-door telling people about “God’s magnificent purposes.”

It is a spiritual or family-based arrangement only. More women than not in the women’s groups mentioned will say that it is antiquated and that they have moved on from it for the best. Point taken. Let it be said, however, that in Watchtower facilities it is an absolutely unremarkable fact of life that women will exercise authority over men in any area where one may have better aptitude, for example, in design, computers, medicine, and law. If the men working under them ‘cop an attitude’ (which has happened) they will hear about it. Men are ever inclined anywhere to parlay their usually superior physical strength into attempted domination. Watchtower headquarters will not let them get away with it. Detractors will catch wind of a woman working in the furtherance of JW purposes, maybe law, and carry on about how she can endure in the midst of domineering men. She doesn’t have to. They submit to her in these pragmatic areas where competence is all that counts, and “submission” is completely irrelevant, being merely a spiritual or family matter of organization.

Women are not seething with discontent over there in Witness-land, as their enemies seek to portray them. Neither are there weak women whom tyrant men play like a fiddle. Of course, there are some weak women, but there are also weak men. On balance, they are about equal in numbers. 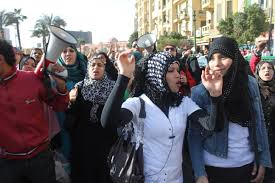 Posted at 12:15 PM in Human Rights, TrueTom vs the Apostates | Permalink | Comments (0)