No sooner did Serena Williams make herself a minor figure of controversy through a birthday brouhaha than she made herself a major one through cussing out another judge at the 2018 U.S. Open, which cost her the match—and for her converting a physical loss into a moral win. It depends upon who you talk to. If you disliked her before, you will dislike her more. If you liked her before you will like her more. I’ll take the latter.

The U.S. Open chair referee penalized her three times, only the second of which was without controversy. When you’re hot, you’re hot, and she blew up at him. Not at first she didn’t, when she said: “We don’t have any code and I know you don’t know that and I understand why you may have thought that was coaching [on the part of her coach allegedly sending an illegal signal] but I’m telling you it’s not. I don’t cheat to win, I’d rather lose. I’m just letting you know.” Her coach said later that he had indeed done the deed, but that it happens all the time, and he does it less than most. It was a point on which sportswriters agreed.

If she didn’t blast the referee then, she sure did blast him after missing a shot and mashing her racket (which also is common): “You owe me an apology!” she shouted. “I have never cheated in my life, I have a daughter and I stand what’s right for her!” See what motivates her these days? See what she had been stewing about, that perhaps caused her to botch the serve? It is her daughter and the example she sets for her—the same daughter that does not do birthdays.

She went on to call the referee a “thief” for taking away the point that presaged her meltdown, and that accusation also counted against her. Some observed that men retort “F**k you!” to the umpire all the time without consequence, so many agreed with her heated contention that she had indeed caught extra flak on account of being a woman.

With Serena forfeiting multiple points, her opponent, Naomi Osaka, won the match, but everyone booed at how it had transpired. As soon as Serena noticed her upset and tears, she ran and embraced her and told the crowd not to boo, even through her own tears: “I don’t want to be rude. I don’t want to interrupt and I don’t want to do questions. I just want to tell you guys she played well and this is her first grand slam,” at which point everyone cheered.

It is so like the Bible admonition to “keep an eye, not on your own interests, but on those of the other person’s” that one wonders if she did not absorb it from her Witness upbringing. Or maybe it is just her and has nothing to do with the Bible. Either way, it means she will make a fine Witness someday should she get everything together. She enjoys a high reputation. Sportswriter Jeff Eisenband tweeted “…people who hate on Serena Williams’ ‘character’ obviously don’t follower her off the court. She’s a competitor between the lines, but a role model off the court as a person and a celebrity.”

Immediately after Serena shot into ex-JW attention through the birthday announcement regarding her daughter, they were on the story, smelling opportunity. What if they could get her to say: “I’ve looked at this more closely and now I denounce Jehovah’s Witnesses! They won’t let women be elders! In this day and age!” Let me tell you some of these characters sent themselves into orbit, as they pressed her on whether Witness “misogyny” really squared with the good works she did off the court. They pressed her on the sacrifices Witnesses make with regard to their religion, and about how they are less almost anywhere else.

Honestly, how people can be so obtuse? She believes in God. Most of those on the Reddit forum do not. She is not going to be knocked off her feet as they blow out of proportion negatives, losing sight completely of the positives. And they think that she is going to cry about sacrifice? She is the least likely to cry about that. She is among the star athletes of our time and she well knows that nothing worthwhile comes without hard work. “Exert yourself vigorously to get in through the narrow gate,” Jesus advises. She will be the last one to wail that it should be as broad as a barn door so as to make it easy.

One can never say with any given individual, but even if they should get her going with their complaints, she will likely say that congregation justice may not be perfect, but it sure is head and shoulders over the justice of the outside world. It is a lawyer’s playground out there, with massive transfers of funds in all directions for every conceivable wrong, with barristers the only consistent beneficiaries. Some congregation members, even ones who have been wronged, will prefer to put their trust in 1 Timothy: “The sins of some men are publicly known, leading directly to judgment, but those of other men become evident later.” It’s not perfect. But it beats the greater world’s justice which so frequently falls down of the job.

One can even picture Serena retiring at this point. Not that I would will it, necessarily, but it could happen. She is now a mom with suddenly another life to care for, a common turning point in a woman’s life. There are things about Jehovah’s Witnesses and pro sports that are not entirely compatible, such as providing temptation to blow one’s top at the misogynistic referee. The two courses are not absolutely incompatible, but they do pose a challenge. 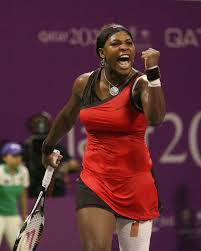