As though it happened yesterday, this gem appears on a recent Australian jurisprudence questionnaire:

“Some Jehovah’s Witnesses approach people in a predominantly Roman Catholic neighbourhood and play a CD entitled ‘Enemies’ to them. The CD describes all organized religions as ‘instruments of Satan’ and then viciously attacks Catholicism in particular. Do you think that the law ought to prohibit conduct of this kind? Discuss with reference to rights and the public/private distinction.”

So a certain blogger assumes that it did happen yesterday—why would she not? and fires off a response:

“Oh I really believe this scenario. It’s exactly what they’d do. Not what I ever would have done. I never had that sort of conviction. Oh how embarrassing! No wonder other churches call them “weirdo religious strangers.” They call other churches “enemies” and “instruments of Satan,” for goodness sake!”

Well, for goodness sake, it does seem mean-spirited, doesn’t it? But it didn’t happen yesterday. It happened eighty years ago. And it was a phonograph record, not a CD. Enemies was published in 1937 and was distributed for less than ten years. Someone’s doing a hatchet job here, hoping to embarrass me. But both the book and record were entirely appropriate for their time. In fact, given the same circumstances, I believe Jehovah’s Witnesses would do it again.

In the aftermath of World War I, had not the mainline churches effectively proven themselves enemies of God, of Christ, and of man? They had, on both sides, stoked and cheered the conflict which would claim 16 million lives, with an additional 21 million wounded. With another world war approaching, they showed every sign of resuming that role. Yet in the interim, they had presumed to slide right back into that cozy seat of representing the Prince of Peace, claiming to speak in his name.

Eighty years later, it is hard to appreciate how enthusiastic church leaders were for the war, how they worked as cheerleaders for both sides. It hardly seems believable. Surely, there must be an exaggeration. But, reflecting back, we find numerous statements validating the unbelievable. For example, British brigadier general Frank Crozier stated: “The Christian Churches are the finest blood-lust creators which we have and of them we made free use.” A few more quotes of the day follow, in all cases made by high-ranking clergymen, not lone renegades:

And from the other side? The archbishop of Cologne, Germany, said the following to German soldiers: “Beloved people of our Fatherland, God is with us in this fight for righteousness where we have been drawn in against our wish. We command you in the name of God, to fight to the last drop of your blood for the honor and glory of the country. In his wisdom and justice, God knows that we are on the side of righteousness and he will give us the victory.” (La Dernière Heure, January 7, 1967).

In America? An editorial in the Christian Register says it all: “As Christians, of course, we say Christ approves [of the war]. But would he fight and kill?...There is not an opportunity to deal death to the enemy that he would shirk from or delay in seizing! He would take bayonet and grenade and bomb and rifle and do the work of deadliness against that which is the most deadly enemy of his Father’s kingdom in a thousand years.” (The Christian Register, Vol. 97, No. 33 (Aug. 15, 1918), p. 775. quotation taken from the book Preachers Present Arms, by Ray H Abrams)

Sure, such fighting words might come from a general. And in the midst of war fever, from a statesman, or a patriot, or a businessman, or the average citizen. But from the Church, the institution claiming Christian leadership, asserting that they and they alone speak for Christ? Is it not a tad at odds with Christ’s own words? “By this all will know that you are my disciples, if you have love among yourselves.” (John 13:35) If you don’t prove discipleship when it counts, during wartime, just when do you prove it? And after the war, should those clergy sweep their bloodthirsty record under the rug, and once again presume to speak in Jesus’ name? Jehovah’s Witnesses didn’t think so. If Enemies seems mean-spirited today, it wasn’t a fraction as mean-spirited as the catalyst that prompted it.

Now, you must admit, it would take guts to distribute that book and play that record. Nowadays, every wussy milquetoast of an atheist takes swipes at religion on his anonymous website, but Jehovah’s Witnesses went eyeball to eyeball with those enemies, in person, and what’s more, they went to members of their flocks. Introducing Enemies to a convention audience in Columbus Ohio, Watchtower President Rutherford declared: “You will notice that its cover is tan, and we will tan the old lady’s hide with it!” It gives the lie to Sam Harris’s one-time complaint as to how the moderate “good” churches failed to condemn their more belligerent brethren, reining them in, refusing to “call a spade a spade.” We did it before he was in diapers and did it with a courage that he would be unable to match.

From the 1975 Yearbook of Jehovah’s Witnesses: “The phonograph work was not carried on without opposition. Ernest Jansma tells us: ‘There were cases of some having their phonographs literally and viciously smashed right before their eyes. Others had them ruthlessly thrown off porches. One brother in the Middle West stood by and watched an angry farmer blow his machine into oblivion with a shotgun, then heard pellets whine past his auto as he left the scene. They were vicious and religiously fanatical in those days.’ Amelia and Elizabeth Losch tell of an occasion when the recording “Enemies” was played for a crowd on the porch of a certain home. After the talk ended, one woman took the record off the machine and broke it, saying, ‘You can’t talk about my pope like that!’”

Today, the influence of the clergy is insignificant compared to what it was then.  I mean, they’re respected so long as they stay in their place, but their place is much reduced from what it once was. In the days of Enemies, their place was anywhere they wanted it to be. They maintained a stranglehold upon popular thought. Catholics, in particular, as one may have heard great-grandparents say, were not allowed to read the Bible. That’s what the priest was for, and he would explain it as he saw fit, in accordance with church doctrine. In town after town, Jehovah’s Witnesses would place literature with interested persons, and clergy would follow and demand it back. Such was the command they enjoyed, that they often got it.

Frankly, if Christendom’s influence is a ghost of what it once was, Jehovah’s Witnesses get the “credit,” in my view. The Enemies campaign was but one of many back in those days. Look, Wilbur and Orville Wright are credited with inventing the airplane. That doesn’t mean we wouldn’t have planes had they never been born. Someone else would have invented them. But they were the first. They had the foresight and guts to persevere with a notion that everyone else thought was impossible.

Some, taking the opposite view of the blogger quoted in the third paragraph, mutter that Jehovah’s Witnesses have become too cordial with other religions, that they have made their peace, that they have wimped out. But there’s no point in kicking the ‘old lady’ while she’s down. We kicked her while she was up. Nowadays, everybody kicks her. So why should we? Whatever account she must render is with God, not us. All we ever wanted to do was loosen her hold on people, so they would not be afraid to listen to new ideas. That was accomplished decades ago. (May 2009) 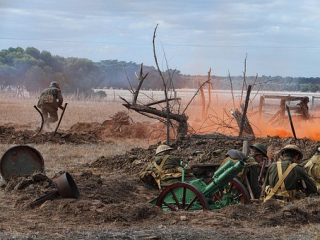 Posted at 11:32 AM in Evil and Suffering, TrueTom vs the Apostates | Permalink | Comments (0)