One Last Chance for Religious Freedom in Russia

Dennis Christensen “has spent the last 20 months in a cold cell with suspected drug dealers and only been allowed to meet his wife, separated by bars and a corridor, twice a month. If convicted, he could spend up to a decade in jail,” writes Andrew Osborn for Reuters. How much do you want to bet that those drug dealers now know their Bibles quite well? Alas, that may make them more unwelcome in Russia than had they landed the area distribution franchise for Drugs-R-Us.

He must have his moments of despondency. He must. But you would never know it. He is serene in appearances, and sometimes even cheerful. Jehovah’s Witnesses could not have wished for better examples to face the Russian bear than he and his wife Irene. See how he typifies the spirit of 1 Peter 2:23:

“Christ suffered...leaving you a model for you to follow his steps closely....When he was being reviled, he did not go reviling in return. When he was suffering, he did not go threatening, but kept on committing himself to the one who judges righteously.”

Has he wavered in his love for his adopted homeland? He “does not regret that he moved to live in Russia. ‘It is one of the best decisions that I have made in my life, and it brought me much happiness,’” he tells the Reuters reporter. This despite his being anything but starry eyed. “To call me or other peaceful Jehovah's Witnesses extremists is the greatest stupidity that I have ever heard!" he says. “Of course I hope that he (the judge) will be just," he said. "But I also know which country I’ve been living in."

Only a month ago, President Putin, when asked, stated that the equating of Jehovah’s Witnesses with terrorists was “of course...complete nonsense,” something “you need to carefully deal with,” and later, “so this should be looked into” since “Jehovah’s Witnesses are Christians, too.” We may soon learn just how carefully he means to deal with and look at it, as the time of Dennis’ sentencing has arrived. As for Irena, “I’m not afraid of anything and Dennis is not afraid either,” she told Reuters.

I have never seen a picture of him in which he is not mild, even well dressed. He actually broke into song at one hearing via Internet, before the guard told him to shut up. Could one ask for a better example? The symbolism is complete. His surname points to the one he follows. Even his carpenter profession lines up. Even his last project as a free man spotlights the idiocy of branding him an “extremist”—building a playground for the community children. Would members of the only other group in Russia officially designated “extremist,” ISIS, also build a playground for the community children? Maybe, but it would be a long time gaining my trust to let my children play on it. On January 23, the prosecutor requested a sentence of 6 years and 6 months in prison. Why not add 6 days to the request to make it a nice, biblical 666?

It's déjà vu for Jehovah’s Witnesses in that country, whose period of freedom has lasted only 27 years. “The only difference is that at that time [of the Soviet Union] they were called 'enemies of the people'. Now they are called 'extremists'," says Irena.

Journalist Osborn does what all journalists must do. He probes for the actual reason that Jehovah’s Witnesses are opposed. Usually all one must do in such cases is read the charges of the prosecution, but here in the Christensen case the charges are ridiculous, and the ‘crimes’ easily refuted. So Osborn hits on one spot of contention after another, but presently puts his finger on the real trigger: “Russia has been the most outspoken in portraying it as an extremist cult.” He refers, perhaps unknowingly, to a burgeoning anti-cult movement which finds conditions fertile in Russia for a perfect storm, but which is active everywhere.

The reason that Putin declares it complete nonsense to call Witnesses “extremist” is because it is. As such, he and his in government would never have dreamt of doing such a thing. However much any of them may dislike Jehovah’s Witnesses, ISIS has taught them what extremism is. They are not so stupid as to confuse the two.

Likewise, the dominant Russian Orthodox Church did not originate the ban against the Witnesses. That is not to say that some of them did not squeal with delight like kids on Christmas morning, but it was not their idea. The thinkers there are not particularly happy about it, for the same set of laws that declare it a crime to proclaim the superiority of one’s religion in the case of Jehovah’s Witnesses might easily be turned against them.

No, problems with the Church and the suspicious government merely make for excellent tinder. The spark that sets it off Osborn identifies with: “Russia has been the most outspoken in portraying it as an extremist cult.” It is a determined anti-cult movement that sets the match to the tinder. It is not even Russian originated, but like Bolshevism itself, is a Western import. Religion writer Joshua Gill has outlined how a French NGO dedicated to protecting people from ideas considered socially destructive—the manifest goal of anti-cultism--sent a well-known emissary to Russia who spread that view with missionary zeal, maximizing his existing status with the Russian Orthodox Church.

The anti-cult movement ever seeks to extend its reach. Only in Russia does it find conditions ripe for the perfect storm, but its influence is afoot everywhere. The match was even literal in 2018 Washington State, where six attacks resulted in two Kingdom Halls burnt to the ground. Of course, that is not the intent—to incite violence. Anti-cultists speak against it, for the most part. But when you yell “CULT!” in a crowded theater, who can say what will happen? The correct term, non-incendiary and chosen by scholars for just that reason, is "new religious movement."

Assembling material in preparation for ‘Dear Mr. Putin – Jehovah’s Witnesses Write Russia,’ I became more and more convinced that the anti-cult movement was behind it all, and it is a conviction that has only strengthened since. In the book’s introduction, I wrote:

“Does Kuraev really mean to suggest that prosecution presented no intelligible arguments at the Supreme Court trial? An observer of the trial might well think it. He might well wonder just what does the government have against Jehovah’s Witnesses? There must be something, but it is not stated. At one point the judge asked the prosecution (the Ministry of Justice) whether it had prepared for the case. A decision had been plainly made somewhere from on high and it would fall upon the judge to rubber-stamp it. Of course, he did, perhaps because he wanted to remain a judge. The actual reasons behind anti-Witness hostility were never presented. So I have presented them in Part II, along with how they might be defended.”

I even went on to caution members of my own faith:

“Some Witnesses, truth be told, will be uncomfortable with Part II and might best be advised to skip over it. They will love the idea of defending the faith but may be unaware of the scope of the attacks made against it, some of which are truly malicious. Deciding to sit out this or that controversy will earn them taunts of ‘sticking one’s head in the sand’ from detractors, but it is exactly what Jesus recommends, as will be seen. Not everyone must immerse themselves in every ‘fact,’ for many of them will turn out to be facts of Mark Twain’s variety: facts that “ain’t so.” You can’t do everything, and most persons choose to focus on matters most directly relevant to their lives.”

That caution is repeated, with even greater applicability, in the newer ebook ‘TrueTom vs the Apostates!’ The book is not recommended to all Witnesses. Read it if you want a specific reply to charges laid against the faith. For those able to focus upon forward motion only, the book is not recommended. For those not, it is. The line that invariably gets the largest applause at Regional Conventions of Jehovah’s Witnesses is: “Would you like to send your greetings to the brothers in Bethel [headquarters]?” The hard work and integrity of these ones is appreciated by all. So not everyone will feel the need to check out every derogatory report.

In some respects, the Witness organization appears to this writer to be out of step with regard to the attacks it faces today. With a long history of persevering in the face of religious threats to stomp it out of existence, it seems slow to acknowledge that religions are mostly licking their wounds these days, and it is the irreligious world, with anti-cultists in the vanguard, that most vehemently presses for its downfall.

And one from BBC Russia, by Viktor Nekhezin 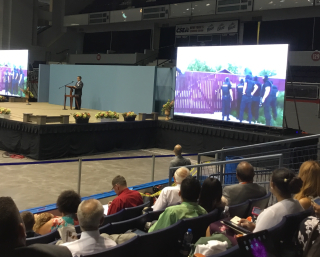