Standing Up to Hitler

There are any number of serial gripers on the Internet who are alarmed at any favorable mention of Jehovah’s Witnesses, and who immediately attempt to negate such praise. Some of these characters strive with all their might to denigrate Jehovah’s Witnesses’ stand during the Holocaust. Of course, this is not easy to do, because the stand is among the most courageous actions of the past century. But they try. Generally, they feign applause for the astounding courage and faith of individual Witnesses, but then take shots at their organization, as though it were entirely separate. Yes, those Witnesses were amazing, they say. Too bad they were sold out by an oppressive, self-serving, uncaring Watchtower central machine.

Any Witness of the time would say that it was because, not despite, the support and direction of their organization, that they withstood Hitler. Nazi troops overran Watchtower branch offices in lands they controlled; their occupants were arrested and imprisoned alike with the rank and file. The mainline churches refrained from criticizing the Nazis, lest there be reprisals. “Why should we quarrel?” Hitler (correctly) boasted. “The parsons…will betray their God to us. They will betray anything for the sake of their miserable little jobs and incomes.”* The major churches received large state subsidies throughout the war.

Not so with Jehovah’s Witnesses. After the war, Genevieve de Gaulle, niece of latter French President General Charles de Gaule wrote: “I have true admiration for them. They…have endured very great sufferings for their beliefs….All of them showed very great courage and their attitude commanded eventually even the respect of the S.S. They could have been immediately freed if they had renounced their faith. But, on the contrary, they did not cease resistance, even succeeding in introducing books and tracts into the camp.” Would that Catholics and Lutherans, who comprised 95% of the German population, were similarly “sold out” by their respective churches. The Hitler movement would have collapsed.

After the war, Catholic scholar and educator Gordon Zahn examined the records and found just one among 32 million German Catholics who conscientiously refused to serve in Hitler’s armies. He found another 6 in Austria. Why so few? He reports that his extensive interviews with people who knew these men produced the “flat assurance voiced by almost every informant that any Catholic who decided to refuse military service would have received no support whatsoever from his spiritual leaders.” Instead, Pope Pius XII, in 1939, directed chaplains on both sides of the war to have confidence in their respective military bishops, viewing the war as “a manifestation of the will of a heavenly Father who always turns evil into good,” and “as fighters under the flags of their country to fight also for the Church.”** No, it was not Jehovah’s Witnesses who were sold out by their organization.

Now, seventy years later, along comes Ragoth, good old analytical Ragoth, who can always be depended upon for substantial comments—Ragoth, meaning no harm whatsoever, who “would also point out the Confessing Church during World War II, a la Karl Barth and Dietrich Bonhoeffer. Granted, most of them were put to death, Bonhoeffer for spying for England and being involved with the plot to assassinate Hitler, but they stood their ground in opposition to the Nazi take-over of the German church. Now, also granted, they didn’t take a pacifist stance. Bonhoeffer and Barth originally started that way, but Bonhoeffer became convinced that as evil a thing as it would be, he would have to suffer the consequences in the afterlife to help the Brits, and, eventually, to become involved in the assassination plot...they were a relatively small group, but, I just wanted to throw in there were some other religious groups openly and constantly opposed to Hitler and the Nazi party, even in the face of death threats and directly against the rest of the churches out of which they came from.”

Ragoth has a point. Not everyone in the German churches supported Hitler. Perhaps 10% of German Protestants took a stand against the Nazis. Doubtless Catholics as well. The point is, though, that they had to defy their church to do it. They were an embarrassment to their respective churches, from whom they received “no support whatsoever.” So some of them banded together into schisms of their own—such as the Confessing Church. Others acted independently as renegades. These were the “political prisoners” mentioned before, no doubt. I have nothing but admiration for these persons. Ragoth is absolutely right to recognize and honor them. They were extraordinary people.

But not everyone is extraordinary. Most people are quite ordinary. It’s true with Jehovah’s Witnesses. Some are extraordinary, but most are just regular folk. Jehovah’s Witnesses did not have to stand against their own religious organization or form a new one because theirs had betrayed its values. They stood against Hitler largely because of their religious organization. Those others stood against Hitler despite theirs.

After the fall of France in 1940, the Vatican’s Cardinal Eugène Tisserant wrote to a friend that “Fascist ideology and Hitlerism have transformed the consciences of the young, and those under thirty-five are willing to commit any crime for any purpose ordered by their leader.” It’s an extreme case, but it illustrates how people are. They run in herds, overwhelmed by national, economic, social or class concerns of the day. The then-current generation ever imagines they are the first to break the trend. When the dust settles, though, they’re seen to be subject to the same laws of human nature as everyone else. It takes a loyal God-centered organization to stem the popular tide, and keep moral principles ever before its people, as happened in WWII and as happens today. 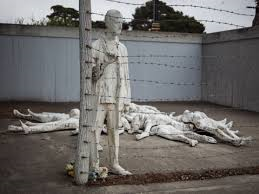 Posted at 12:23 PM in Holocaust, TrueTom vs the Apostates | Permalink | Comments (0)