The Value of Organization

Anti-cultists mutter about the assumed “rights” of “religious corporations.” Such corporations need to be reined in so that they do not harm people, goes the charge. It sounds lofty, for who wants to be harmed? but it is only an attempt to neuter religion by depriving it of governance. It is akin to saying that the French people, or the Australian people, or the Nigerian, or the Russian, are fine people, but they should not be allowed to govern themselves—masking the unspoken hope that they can be better assimilated that way. It is the same way that you might seek to deprive enemy soldiers of their generals, thus “protecting” them from fighting for a cause you do not want them to fight for. People of religious bent form a corporation because it is the only way in which they can legally operate in the world of nations. They would have no interest in it otherwise.

Apostates don’t hate Jehovah’s Witnesses, many of them will tell you. They love Jehovah’s Witnesses. They want to help them. They want to break them free from their oppressive organization. It is like this writer saying that he loves Americans. It is only their government that he would seek to destroy. Surely, they’ve drunk too much of the Kool-Aid themselves. Some of them envision springing loved ones free from the Watchtower to their undying gratitude, like Dorothy freeing the guards from the Wicked Witch of the West and her winged monkeys.

My wife and I had people from Texas come into town to work on a Kingdom Hall remodeling project nearby and they needed a place to stay. Sight unseen, we handed them the keys to our house while we were heading away on vacation. Many people would die for such a brotherhood in which you can place such trust in total strangers.

At the Independence Day church, Mr. and Mrs. O’Malihan heard of this and decided to do the same. The first guests who stayed at their house broke their TV. The second set of guests tracked mud throughout the house. The third set found the Go Packs and raided the funds set aside. The fourth set emptied the house completely and the O’Malihans returned to four bare walls. Steamed, they contacted the Independence Day church headquarters. “Oh, yeah, that happened to us, too. No, they’re not congregation members – they’re imposters. But we have such a half-assed organization that any scoundrel can pull the wool over our eyes in a twinkling.”

It’s not a true story. I made it up for the sake of contrast. But the guests from Texas are true. The Witness visitors are quality individuals to start with because they are known to have dedicated their lives to God and they work under the direction of the organization that they are convinced he directs through his spirit. They are also screened through that organization so that, when you come to find that they need a place to stay, you know they are who they say they are. It doesn’t just happen by chance.

It is not like in the 1970s, when I, on a whim, drove to a St Louis International Convention of Jehovah’s Witnesses and presented myself at the rooming desk with the expectation that someone would put me up for the four or five days. They did. The only way that they knew I was a Witness was that I said I was. I stayed with an elderly sister and her non-Witness husband who treated me as though one of their own. But that was long ago, and “wicked men and imposters have advanced from bad to worse,” says the verse. Today there is vetting.

You can do more with organization than you can without it. It is no more complicated than that. In the case of an organization such as Jehovah’s Witnesses, devoted to spreading “this good news of the kingdom throughout all the inhabited earth,” stellar organization of voluntary efforts has enabled an entirely new channel of Bible production and distribution to be invented, so that they poorest person on earth can yet have a low-cost, free if need be, modern and understandable copy of what he has come to believe is instruction from God.

That same organization invents a website, for spread of the Christian message, which translates into 1,000 languages. People speak a dizzying array of languages throughout the earth. If your mission is to teach them all a common message, then somehow you have to deal with that. In today’s digital age, one can hardly be serious about Christ’s commission to preach throughout the entire inhabited earth unless one has such a website. There is no excuse not to have one, and having one is powerful evidence that you are qualified to do the work you have taken on. After all, when your car needs service, do you take it to the garage content to operate with duct tape, vice-grips, and WD-40? Or do you take it to the garage that has equipped itself with every modern tool?

Not everything has become more organized over time. Some things have become less so. Go back far enough and one could expect to be served a full meal at any convention of Jehovah’s Witnesses. I have seen an empty cavernous room, with only water and electric hook-up, converted to a full-scale kitchen capable of serving thousands in only a few hours’ time. With no knowledge of cooking, I almost ruined one, disposing of an unneeded vat of cooking grease by pouring it down the drain.

Feeding arrangements were simplified with the passage of time, for the members so sacrificing of their energies caught very little of the program in those days. Eventually, prepared meals gave way to various items of pre-packaged food, purchased beforehand, and distributed via a donation arrangement. One of those items was known as “a pasta salad,” and, as though anticipating my future role, I used to refer to it as “an apostasy” salad. I had been placed in charge of that food distribution at our circuit assemblies, so I used to say it a lot, offering everyone apostasy salads, ever suggesting that they try one. They were very good.

Today, Witnesses brown-bag it at their large gatherings. You cannot just waltz up to the directors of any huge organization and slip in your suggestions—they are slammed with things to do. However, the new method came about in very nearly that way. “You know, why doesn’t everyone just bring their own lunch?” a member observed in one of the local congregations, “we all know how to pack a lunch.” The circuit overseer included it in his report to the branch. The branch liked the common-sense idea. Should it be passed on to the Governing Body? It was, and they loved it. Everyone packs a lunch now, not through some lofty command from On High, but through the two cents of a local publisher.

If he can do it, maybe I can do it. My suggestion will spell the end of five or more persons in a vehicle—I am a known pain-in-the-neck on that point—save for special considerations of weather or safety. Four is ideal, and three is to be preferred. That way, one can always develop the experience of one-on-one speaking. I’m not sure I like the idea of “counting time,” either, that is, keeping track of how much time is spent in the ministry. It is done so that reports can be made and the needs for support can be assessed, but it tends to lead to quirky perceptions of being on-duty and off-duty, and even avoiding productive times in the ministry in order to accrue time in less productive but more convenient other times.

Ah, well. They’re small things. I probably won’t get them. It is true that people respond to goals. In any organized arrangement, there will be many things that do not go your way. The trick is to remember what is important and what is not. It is even true with big things. You don’t win them all.

Is it too much, the degree to which Jehovah’s Witnesses are organized? You could make a case for it. When a ten-minute talk at the Kingdom Hall focuses in on just how to handle the sound equipment, how far to hold the microphone from one’s mouth, at what angle to hold it, and what to do if you are the microphone handler and the one you hand it to is doing it wrong, there is a part of me that says: “Oh, for crying out loud! Just heave the microphones into the trash and tell people to speak up—the room is not that large!” It can get picayune. Still, that’s just the way people are sometimes. 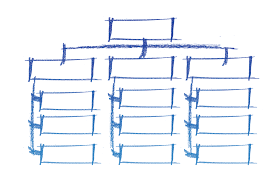 Posted at 11:59 AM in Organization, TrueTom vs the Apostates | Permalink | Comments (0)