You Got a Timetable on That?

Years after he went apostate on us, Vic Vomidog would walk into the hospital transfusion room, roll up his sleeve and say “Fill er up!” just to show Jehovah’s Witnesses what he thought of them. He authored a book—I still it see sometimes on the Internet: “Forty Years Down the Toilet - My Wasted Life with Jehovah’s Witnesses.” Online he’s been known to log into forums as Tom Puppydogs, so you have to watch out! More recently, he’s somehow got his paws on a treasure trove of mundane Watchtower correspondence and he publishes each item separately as though each were a more damning indictment than the one preceding. I mean, if Jehovah’s Witnesses pay their utility bill, he publishes the receipt as proof that they trust in man for power, not God. What is it with this guy?

So I contacted him. It was probably not a good idea—they always say we ought not do it—but we used to work closely together at one time, and I just felt I should attempt to talk sense into him. What about the nearness of the end? I asked him. “You got a timetable on that?” he shot back.

No. I don’t. Isn’t that really what’s at the crux of everything?

We don’t get a timetable. Jesus said: “keep on the watch” and “at an hour that you do not think to be it the Son of Man is coming.” Each time we’ve tried to force specificity on a prophesy we’ve been burned. And, no, it isn’t frequent. It’s happened just once in anyone’s lifetime (unless you are really really old). Everyone gets one free pass for a missed end-date. It’s in the rules.

It is enough for Jehovah’s Witnesses. We are convinced this system is a failure and slated for replacement by God’s kingdom. Our hearts are in that new system. We proclaim it. We even refer to it as the “real life,” applying the words of Timothy. But if your heart is with this system, all the work and practices and beliefs of those whose heart is with the one to come seem extreme, unnecessary, or even deleterious. It all depends upon where your focus is. Live a good life now, even try to reform this world, or adhere to what JWs believe is the Bible’s hope—a coming new system.

Our people tend to regard apostates as “the bogeyman,” and I sometimes wish it wasn’t that way. It lends them an undeserved air of mystery. They’re not mysterious at all. Their actions are very understandable. Everything lies in that verse about the slave who, discouraged that the master keeps delaying, begins beating his fellow slaves. That verse never used to make much sense to me, but as I’ve seen the drama enacted in recent times, it now hangs together quite well: “But if ever that evil slave should say in his heart, ‘My master is delaying,’ and should start to beat his fellow slaves and should eat and drink with the confirmed drunkards...”  (Matthew 24:48-49)

It is in the midst of parables and prophesies (Matt 24 & 25) concerned solely with Christ’s parousia (“presence,” often mistranslated “return”) Once the slave gets fed up about the master’s “delay,” he jumps ship, and then he has a lot of time to account for—years, even decades, proclaiming a message he no longer believes—wasted years, as he now sees them. What better way to account for it than to say he was misled, lied to, brainwashed? In effect, he “beats” his fellow slaves, the ones who continue to stay the course.

To avoid even the chance of being caught up in this outcome, ending up like Vic, why not hedge one’s bets a little? Why not hold back? That way, should one go sour on the whole Christianity thing one day, it won’t be so hard to reintegrate into the world, since one never really left it in the first place. In short, why not learn, as is all the rage today, to “have your religion but keep it in its place” (which, of course, means last place)?  Wouldn’t that be the practical course?

Yes, it would appear to, except that makes one lukewarm, and Jesus doesn’t like for his followers to be lukewarm. To that Laodicean congregation: “I know your deeds, that you are neither cold nor hot. I wish you were cold or else hot. So, because you are lukewarm and neither hot nor cold, I am going to vomit you out of my mouth.” (Revelation 3:15)

You might even liken the apostates to bad Baruchs. You remember Baruch, serving by Jeremiah’s side for decades, leading up to Jerusalem’s overthrow by Nebuchadnezzar. He got tired of it at one point, though, and the 45th chapter of Jeremiah is written for him: “This is what Jehovah the God of Israel has said concerning you, O Baruch, you have said: “Woe, now, to me, for Jehovah has added grief to my pain! I have grown weary because of my sighing, and no resting-place have I found.” “This is what you should say to him, ‘This is what Jehovah has said: “Look! What I have built up I am tearing down, and what I have planted I am uprooting, even all the land itself. But as for you, you keep seeking great things for yourself. Do not keep on seeking. For here I am bringing in a calamity upon all flesh,’ is the utterance of Jehovah, ‘and I will give you your soul as a spoil in all the places to which you may go.’”  (Jeremiah 45:2-5)

And Baruch proceeded to say: “You got a timetable on that?”

Oh, alright, alright—he didn’t say it! I just threw it in. Apparently, he responded well to the council, for his name is mentioned later as one of the faithful ones. Would that the same could be said for his counterparts today. (July 2011) 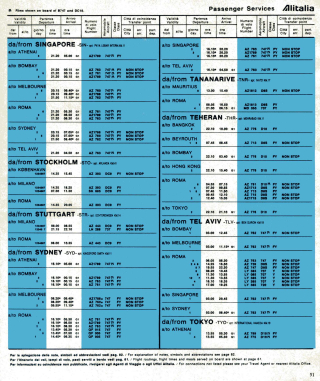