Home Archives Profile Subscribe
Who Really Is a Cult? Part 1
I May Have Called Him a ‘Big Baby’ a Time or Two, But Nothing More.

At the Genesee Brew House

At the Genesee Brew House, all waitresses and restaurant staff are full employees of the High Falls Brewing Company and enjoy equal benefits. 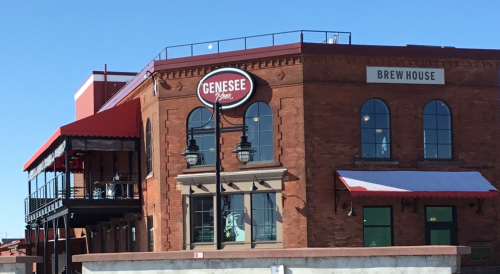 This puts their work a cut above many waitressing jobs. Is there internal transfer to and from the adjacent brewery? I asked. No, it doesn’t often happen, our waitress said. She knew of no examples. She characterized those in the Brewery itself as lifers.

I told her my beer joke and she laughed. She didn’t guffaw like a donkey, and she didn’t collapse rolling on the floor in convulsions.  But it was a good solid laugh, not one of those “I’d better laugh at this old duffer’s lame joke so that he does not take it out on his tip, the way he looks like he might do.” No. it was an honest laugh. (Nor am I a bad tipper.)

My wife and I held out for a window seat, with a view of the High Falls. After lunch, we walked the unshoveled pathway by the farther fence. 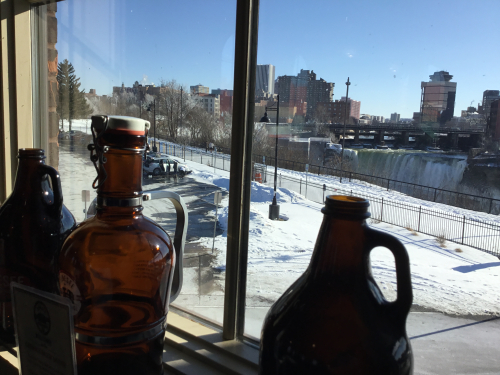 During summer, one does well to sit on the balcony just outside and afterwards walk the Platt Street bridge over the Genesee River that bisects Rochester. Looking out another window, we spied yet another of the horses on parade that found a permanent home when the parade exhibit was through and the creatures were auctioned off for charity. Well over one hundred are scattered throughout the area, each fiberglass and each with painting. This one, just across the street, may be closest to its home, because the idea originated with High Falls Brewing, the makers of Twelve Horse Ale. 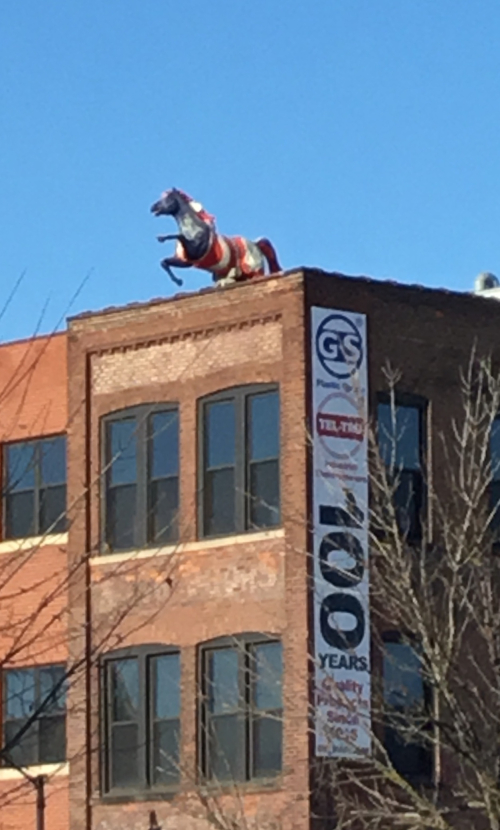 The restaurant itself is on the second floor of the 1904 building, which was first a bottling plant for Standard Brewing Company, then a succession of other businesses, ending up for 30 years a plumbing supply house, before being purchased by the Genesee Brewing Company in 1982 and converted to a restaurant 30 years after that. On the first floor is both a gift shop and museum of local beer history, with some emphasis on dodging the authorities during the days of prohibition. 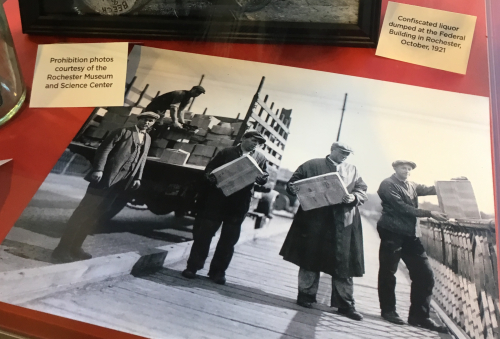 One poster recounts how “the city’s brewing industry also benefited from [German] migration [of the mid-eighteen hundreds] and from the growing theory that beer was healthy. (It was sometimes referred to as “liquid bread”.) This frustrated temperance advocates.”

A poster on the wall from bygone days advises buying Jenny by the case, and that is just what some visiting friends of ours from Rhode Island did, only they bought a case of Genny Cream Ale, which comes in a green box, not red. (for a friend, they said, as they plunked it down in our breezeway while they stayed with us.) 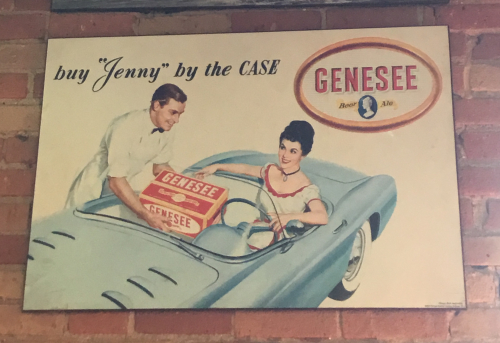 As sometimes happens with local attractions, they had stumbled upon the restaurant before we did, and it was on their visiting itinerary.

And the joke? Its setting is from many decades ago. A night worker, all alone on graveyard shift, had only to circle the huge tanks of brewing beer to ensure that all ingredients were mixing properly. Dead tired and thoroughly bored, sometime after 3 AM, he fell in and drowned. The commotion was huge the next day, with police and reporters all gathered around, when one of the latter ventured that his death must have been a horrible way to die. “No, I don’t think so,” said the supervisor, looking very thoughtful, “because he climbed out four times to go to the bathroom.”