Home Archives Profile Subscribe
"We Are Wise and Learned Adults, Far Too Clever to Be Sold Adam and Eve. What's Next - Mickey Mouse and Donald Duck?
From Sergey Skrynnikov‘s Closing Statement

They Surrounded the Hall With Torches!

Guarding the Assembly Hall overnight, the way we used to do, sitting in that guardhouse with hourly walkarounds, it was peaceful and anything but exiting. I checked the logbook of previous shifts, updated hourly.

“No problems” and so forth.

I thought that I would liven things up:

“Building is suddenly surrounded by an angry mob carrying torches, led by priests, threatening to burn it to the ground. Partner & I react quickly, confront & tie in knots mob leaders with selected scriptures, they disperse muttering & scratching heads. Like Saul: “But Saul kept on acquiring power all the more and was confounding the Jews that dwelt in Damascus as he proved logically that this is the Christ.” (Acts 9:22)

I felt bad about it the next day. Had I been too flippant with the ‘sacred records’? It was an assembly day & I stopped by to remove the sacrilege. But the old pages were gone & new blank pages added. Was the old the subject of a Wednesday meeting at HQ?

I might not do it today. But then, we long ago decided not to guard it that way, so the opportunity would not come up.

Would I tease the priests that way, today? Yes, probably, for that was clearly in good fun, but I might be slightly more circumspect....though not decline it altogether—about relating of the minister giving the talk who built his theme around such-and-such material: (turn to the verse and it is one of the blanks)

and then the middle and concluding portions around...(two more verses)

with the immediate result that “some began to believe the things said; others would not believe” (Acts 28:24)

and the long-term result that: “The fact is, some were crying out one thing and others another; for the assembly was in confusion, and the majority of them did not know the reason why they had come.” (Acts 19:32)

That one is clearly an inside joke, and even that one I dial back these days. One not get smug.

We came across a clergyman’s house out in the ministry, attached to the church. I made for it, and a companion wanted to come. “Nah, you’ll get into a fight,” I said. I felt bad and had to dig myself out of it later, but not too much because I know it would have gone down that way. He just likes correcting people. 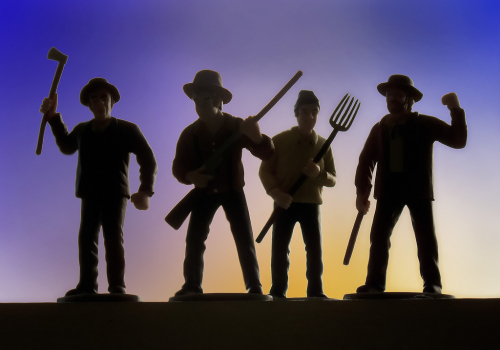