Built on the Backs of Slaves

A bit south on Meeting Street in Charleston, we came across the Nathanial Russell home. It was a National Historic Registry Site and there were tours advertised, so I was fooled—I should have known better—into thinking National Historic Park rangers would be acting as guides, just like they did at the Taft home and the Van Buren home. I didn’t know who Russell was, here in this historic part of South Carolina, but I figured he probably had something to do with the founding of the country. My bad. He wasn’t a founding father at all. He was an enormously successful merchant, one of the upper echelon of wealthy merchants, the guide deferentially told us as we toured the restored Federalist style house. 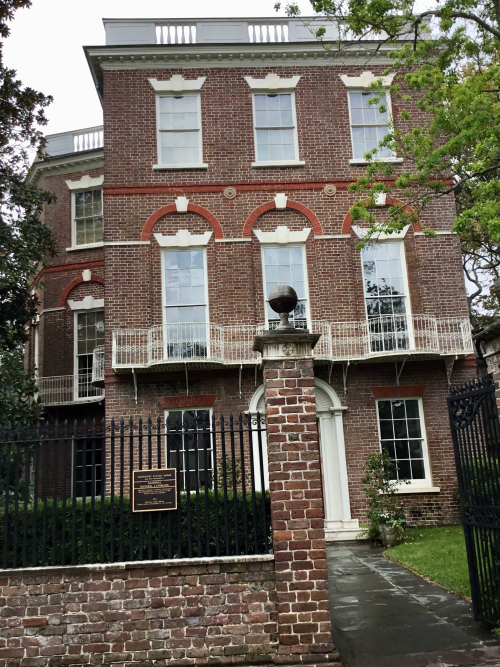 He made his fortune irrespective of who ruled the colonies. He made it prior to the formation of the United States—a portrait of him in a first floor room has him looking decidedly British. He did nothing but add to his fortune after the founding of the United States—a latter portrait of him hanging upstairs, (the portrait, not the man) painted twenty years later, has him looking decidedly American. He was one of the most prosperous merchants of his time in all the world.

It took a while for it to dawn fully on me just what was the commodity upon which he made his fortune. It wasn’t that it was hidden. The guide plainly stated more than once that the man’s stupendous 6500 square feet house “was built on the backs of slaves.” It is not the house’s fault that it was built that way, and it’s the house, not the man behind it, that accounts for its being on the historic landmark registry list, where Landmark Society volunteers and not National Historic Park rangers conduct the tours. 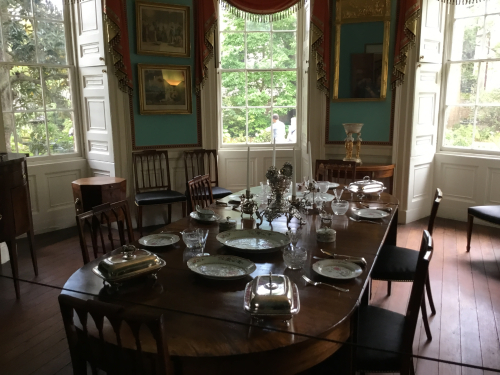 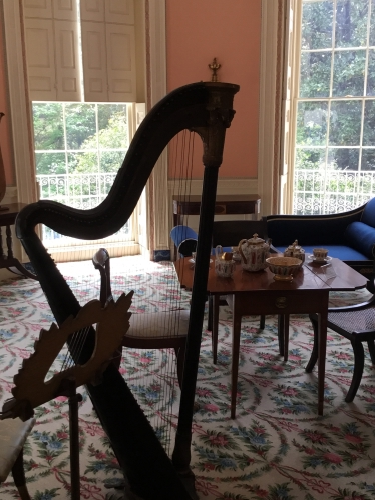 How much does the person taint the building? In time, Russell turned his attention to gobbling up real estate and increasing his wealth thereby. So he never actually did anything noble in making his fortune, though he did in the distribution of it. Allowing that he was a “complex” man, “multi-faceted,”—were those her exact words or did she use synonyms?—the guide went so far as to call him a “feminist” because he signed up to a pre-nuptial agreement with his second wife, unusual for the time, which gave her sole control of her portion of the prize. It was not a marriage of love, the guide pointed out, and she indisputably is remembered for philanthropy, though the nature of that philanthropy was not specified and I didn’t think to ask.

“There’s no nice way to spin” his history, the guide stated, even as she gushed over his influence and power, the magnificence of his home—there was a point at which I wished she had observed that the man is now just as dead as his slaves. (To my surprise, I discovered, via poster in the museum part of the house, that the slave trade to the southern states, massive though it was, was but a tiny part of the whole.)

I distrust this oohing and ahhing over social prominence. There is a part of me that invokes, admittedly on too little evidence, Jesus’ observation about the Pharisees, who loudly decried how they never would have acted as wickedly as their forefathers. ‘You would have done worse,’ he told them.

(Woe to you, scribes and Pharisees, hypocrites! because you build the graves of the prophets and decorate the memorial tombs of the righteous ones, and you say, ‘If we were in the days of our forefathers, we would not be sharers with them in the blood of the prophets.’ Therefore you are bearing witness against yourselves that you are sons of those who murdered the prophets. Well, then, fill up the measure of your forefathers. - Matthew 23:29-32)

“It is difficult to get a man to understand something, when his salary depends upon his not understanding it,” said Upton Sinclair. Russell probably never did understand it. The civic leaders of his Rhode Island and Charleston residencies didn’t understand it—he built much of the latter town—and do they understand it even now? Few are the written references to just what sort of a merchant he was, and the ones that exist are but footnotes. Others, however, uprooted from their homeland and separated from their loved ones, understood it quite well.