The Apostle Meanders as Usual - or Does He?

The apostle writes, in chapter 8 of the first letter to the Corinthians, about not doing what one has every right to do so as not to stumble new or weak ones:

“Now concerning foods offered to idols: we know we all have knowledge. Knowledge puffs up, but love builds up....we know that an idol is nothing in the world, and that there is no God but one...Nevertheless, there is not this knowledge in all persons; but some, being accustomed until now to the idol, eat food as something sacrificed to an idol, and their conscience, being weak, is defiled.  (8:2-8)

“He is still at it in chapter 10! Talk about long-winded!

“Everything that is sold in a meat market keep eating, making no inquiry on account of YOUR conscience; but if anyone should say to you: “This is something offered in sacrifice,” do not eat on account of the one that disclosed it and on account of conscience.  Conscience,” I say, not your own, but that of the other person. (10:25-33)

But the chapter in between—he meanders off into something totally different! It’s his modus operandi—meandering all over about everything. Or does it only seem like he is meandering?

Excerpts from the chapter in between, 9: “What soldier ever serves at his own expense? Who plants a vineyard and does not eat of its fruit? Or who shepherds a flock and does not partake of some of the milk of the flock?” (vs 7)

Nobody. They never do it.

“Am I saying these things from a human viewpoint? Or does not the Law also say these things?  For it is written in the Law was a of Moses: “You must not muzzle a bull when it is threshing out the grain.” Is it bulls that God is concerned about?” (8-9)

“Or is it actually for our sakes that he says it? It was really written for our sakes, because the man who plows and the man who threshes ought to do so in the hope of receiving a share.” (10)

“If we have sown spiritual things among you, is it too much if we reap material support from you?  If other men have this rightful claim over you, do we not have it much more so?” (10-11)

It almost sounds like he is angling for a paycheck. Or is he?

“Nevertheless, we have not made use of this right, but we are enduring all things so that we might not in any way hinder the good news about the Christ.” (12)

No, apparently not. He doesn’t in any way want to “hinder the good news about the Christ.”

“Do you not know that the men performing sacred duties eat the things of the temple, and that those regularly serving at the altar receive a share from the altar?  In this way, too, the Lord commanded for those proclaiming the good news to live by means of the good news.” (13-14)

Wait. Now it seems like he is going back to a paycheck.

“But I have not made use of a single one of these provisions. Indeed, I have not written these things so that this would be done for me, for it would be better to die than—no man will take away my grounds for boasting!” (15)

No. I guess not. What does he mean about boasting?

“Now if I am declaring the good news, it is no reason for me to boast, for necessity is laid upon me. Really, woe to me if I do not declare the good news!” (16)

Okay, it is not about the fact that he is preaching.

“If I do this willingly, I have a reward; but even if I do it against my will, I still have a stewardship entrusted to me.  What, then, is my reward? That when I declare the good news, I may offer the good news without cost, to avoid abusing my authority in the good news.” (17-18)

Is it that he does it without cost?

“For though I am free from all people, I have made myself the slave to all, so that I may gain as many people as possible.”

Looks that way. Slaves don’t pull down a paycheck, after all, and he has made himself one.

Okay. He does whatever he has to do to cater to those to whom he visits.

“Do you not know that the runners in a race all run, but only one receives the prize? Run in such a way that you may win it.  Now everyone competing in a contest exercises self-control in all things. Of course, they do it to receive a crown that can perish, but we, one that does not perish.  Therefore, the way I am running is not aimlessly; the way I am aiming my blows is so as not to be striking the air...” (24-26)

“but I pummel my body and lead it as a slave, so that after I have preached to others, I myself should not become disapproved somehow.” (27)

It all comes together at the end: “even as I am pleasing all people in all things, not seeking my own advantage but that of the many, in order that they might get saved.” (10:33)

And—it is just me?—I cannot help but think of Hester Prynne, from The Scarlet Letter:

“It is remarkable, that persons who speculate the most boldly often conform with the most perfect quietude to the external regulations of society. The thought suffices them, without investing itself in the flesh and blood of action.” 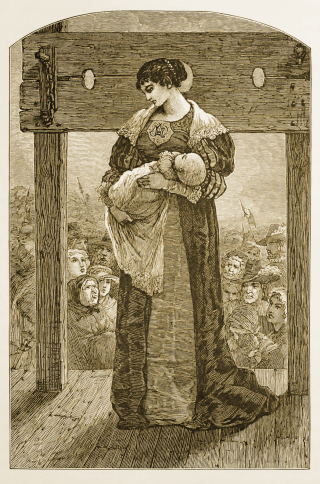