You Don’t Enter Stage From Behind the Quarter Walls

They have quarter walls on the platform of the new Kingdom Hall I visited. Most taking the platform would walk up from the side, disappear behind one end of the wall and then reappear from the other end to take the speaker position. I only saw one person do it differently.

It is just a small thing. Hardly worth mentioning. Petty, anyone? I ought to rise about the temptation to say anything. But.....on the other hand........

IT DROVE ME NUTS! Why would anyone do it that way?

I know how this happens. Someone starting doing it thinking it looked more “dignified.” Others thought it was a progressive idea, and followed suit. That is how these things work. There is never a ‘rule’ though occasionally there is an unwritten rule which you cope with by just ignoring it.

The way you stop this nonsense is by deliberately flying in the face of it. Structures vary, but usually there is but a single step from the auditorium to the platform—it runs the width of the platform—and you mount that step any old place that you happen to be—let the stuffy other brothers think that you are uncouth if they must. What is more likely to happen is that they will come to think the other way is a little silly.

They see it done that way at the Assembly Hall and they try to carry over the experience to the Kingdom Hall. At the Assembly Hall, that seats 1000, well—of course! Just like in any auditorium, you have to enter through a door in the back and then come on stage behind a curtain or a half wall. You can’t just take stage directly from the auditorium because you would have to clamber up a 2 or 3 foot wall, and that would look ridiculous.

Entering from behind the short walls at the Kingdom Hall makes just the opposite impression. The walls are convenient places to store junk behind, most likely—unused mike stands and the like. It’s not for a pretentious means for entry when you can just walk up easy as pie from where ever you are!

“Sure,” says my wife. “You always know just the way it should be. Everyone is doing it wrong. Only Tom knows the way to do it!”

Finally, that woman is catching on! DO IT RIGHT, BROTHERS! 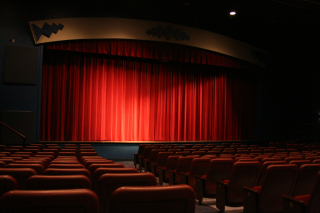