Home Archives Profile Subscribe
“Despite Whatever Way This Trial May End, Christensen is the Winner”
Sex and the Two-Mile Strand of Spaghetti

“After hearing a rather generic announcement that someone has been "reproved," without knowing the actual reason for that reproof, how would congregants know to keep their children away from them? Another congregant might assume that a person being reproved was caught smoking or fornicating with an adult; child sexual abuse might be the last thing they would consider when they hear of someone having been reproved!” So says Alexandra.

All one need to do blow this silly thing out of the water is to read the relevant portion (point 11) of the JW downloadable child abuse policy:

In the special case of child sexual abuse, these are the steps that go above and beyond handling other forms of wrongdoing. Alexandra’s entire complaint is based upon something that is factually incorrect. Whether or not the published policy addresses every conceivable scenario or whether it is foolproof is another matter entirely. She has stated that there is none. There is. And it would be hard to put it in a more obvious place—the online and downloadable WT policy on child sexual abuse.

It is clear that Alexandra spends too much time pouring over confidential material intended for others and insufficient time reading what is right under her nose. Moreover, had she come by the elders’ guidebook honestly, rather than pilfering it off the internet, put there from some like anti-JW activist, she would have been there to hear the “Brothers, make sure you consult the online CSA policy, for the special circumstance of when the wrong repented over involves child abuse.”

Is it nothing? Some of these activists have huge audiences who uncritically lap up every word, and here is a major complaint that is undeniably bogus. By advancing it, when she really ought to know better, she contributes to the hysteria of anticultism that less freedom-loving nations use as a pretext for physically assaulting and jailing upright people. 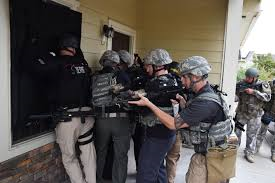 There is no finer way to feed into someone’s persecution complex than to persecute them. The picture reflects what is right now happening in Russia.

Having declared a group of persons extremist, you cannot arrest them non-violently. Otherwise you reveal that you don’t really regard them as extremist.