Home Archives Profile Subscribe
Traveling - A Day in the Life of the Florida Sun
Considered an Imposter, When I am True

“Rochester, I Think We’ve Got This”

“Rochester, I think we’ve got this,” said Eli Paperboy Reed, venturing opinion at the onset of rain that would drench his listeners while he stayed dry. As though to show him that the city had more to offer than rain, his mike went dead. But he didn’t miss a beat, belting his soul out as the sound tech fixed it. He is a must-see artist who deserved more than the handful of weather-proof diehards that he got. One of them hollered that he must come back, for the weather is not always like this. What had he been smoking?

Actually, it was not like this last year. The ten-day Lilac Festival was picture-perfect almost every day. What are the chances of that happening two years in a row? I had heard Rochestarians grumbling all way from god-awful 90 degrees muggy Florida the prior week, and I had said “No worries. It will all clear out in time for the festival.” What had I been smoking?

I was there, all right, for I had come prepared with blue raincoat to slip over a warm grey jacket, which also wasn’t needed when I arrived after 4. When he waved everyone in close for the final number or two, I was close enough to get a decent photo or two, even with the crummy phone camera. Mrs. Harley doesn’t come to the Lilac Festival when the weather looks surly, so I was on my own.

It took him the entire set—I mean, he really must work on timely delivery—but at show’s end, the sun did indeed begin to pierce the gloom. A half hour later, it was full sunshine for the next group, who probably didn’t even thank him. I’d never heard of they or Eli, but that is only because I don’t keep up. The devoted fan next to me was aghast at my ignorance.

Garnering attention over the last decade, Eli was named Breakthough Artist of the Year by the MOJO awards people in 2009. Anyone who savors R & B must not miss this fellow when he comes to town, enhanced by a phenomenal backup band. How can you go wrong with someone who starts his set with ‘Go Tell That Long Tongued Liar’? 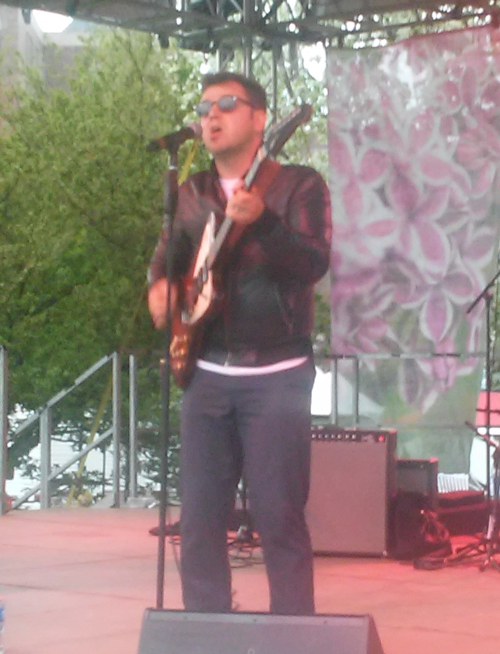 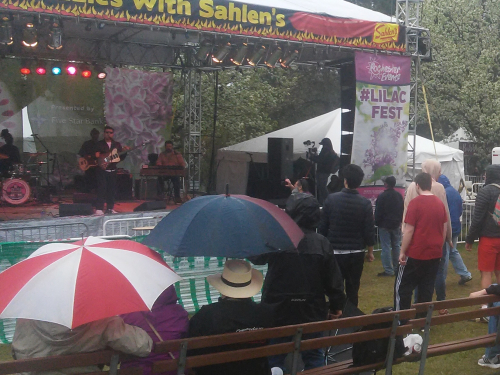