Sex and the Two-Mile Strand of Spaghetti

Scientists identify four fundamental forces of nature: the strong and weak nuclear force, gravity, and the electromagnetic force. For 99.9% of the earth’s population, these are irrelevant and there is only a fifth that must be understood: the force of sexual attraction. God didn’t want to revisit Adam and Eve after a few hundred years, discover them on a barren planet, and hear them say “Oh, we were supposed to do that? I guess we plumb forgot. Sorry.”

Sexual attraction is the most crucial force to understand, even if it is not of the Four. Pursue the four if you like—and it is good for human knowledge that some do. However, the typical youngster will never approach a black hole of outer space to see the four forces interact.

He or she will approach the black hole of sexual attraction that his seemingly overcautious parents have probably told him about. Intrigued by an awakening of desire, he gingerly approaches. All seems inviting, tantalizing—what is this fuss that the old people have carried on about? He edges closer and closer until its sudden irresistible pull grabs and stretches him into a two-mile strand of spaghetti. 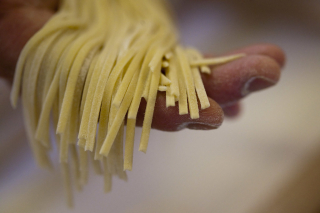 photo: "spaghetti" by Rene something something