Home Archives Profile Subscribe
Skirmish # 338060: Why Can’t This Yo-Yo be Like Me?
One Dud of a Hall Here Can Buy 100 There - the Kingdom Halls

Skirmish #50017: “I see that you not supporting this [dumbing down] trend in Organization, but that is how it is

Srecko: “Simplified editions of text in WTJWORG publications is normal result and normal need, not just for poorly educated secular people, but because  WTJWORG advises only few years of standard, basic education for JW members as something that is ALL they need in this World without Future...I see that you not supporting this trend in Organization, but that is how it is”

The “uneducated and ordinary” governing men of Acts 4:13 always remained uneducated and ordinary. The “For you see his calling of you, brothers, that there are not many wise in a fleshly way” of 1 Corinthians 1:26 always remained the case. The “wise and intellectual ones” that do not think Jesus’ teaching worth their time never reconsider their view.

Those identifying themselves as Christian are often embarrassed over this, and seek to present it as a distressing circumstance that they grew out of—“Yes, we may have started out lowly, but look at how we have pulled ourselves up by our own bootstraps!” they say. They should not reason this way.

If the education of this world was worth the paper it was printed on, it would have been reflected in better conditions today. Surely today’s education model must take responsibility for the world is has collectively created. Very seldom are national leaders poorly educated. Typically they have gone to the finest universities.

Usually when something doesn’t work, it is discarded. In the case of “education,” however, the assumption is that more of it is needed—education is the way out, its advocates say.

Generally speaking, those of the greater world are smarter than us. However, most of their schemes will come to nothing because they do not know how to get along; they do not know how to overcome greed; they do not know how to overcome class division or racial division. They sell what knowledge that they do have—you’d better have substantial funds on hand, or plan on going into deep debt—to benefit from their knowledge. One “educated” person in the Witness organization is worth 50 in the overall world because there are neither pay walls nor turf wars where they have come to call home. They discard the baggage of education that so plainly has not worked and cherry-pick the parts—subjects of pure practicality and applied science—that do work.

A main subtheme that lies just below the surface of those who look down upon Witnesses is the latter’s sense of superiority due to having “higher” education—elitism is as strong as any force, and as misplaced, as any of the other ones that divide people and keep them from reaching but a fraction of their potential.

“Now when they saw the outspokenness of Peter and John, and perceived that they were uneducated and ordinary men, they were astonished. And they began to realize that they had been with Jesus.” Acts 4:13

“At that time Jesus said in response: “I publicly praise you, Father, Lord of heaven and earth, because you have hidden these things from the wise and intellectual ones and have revealed them to young children.” Matthew 11:25 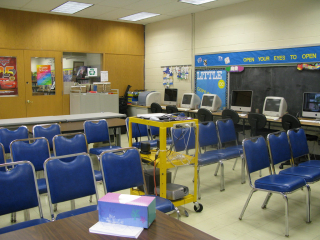 photo:my desk to back right, by NJ tech teacher

Posted at 11:48 AM in Homeschooling/Education, Organization | Permalink | Comments (0)