Traveling - A Day in the Life of the Florida Sun

There were at least 12 pots of coffee on the Seven Eleven burners at 6 AM and I said that it was too much. The clerk—maybe it was too early for him or maybe he was not all that bright—took my remark as chastisement. I hadn’t meant it that way. I meant it the way it was said to my 4-year old son, after he completed a presentation at the door years ago and the householder had said: “You’re too much!” He hadn’t understood it, either. “Why did that lady say that there was too much of me?” he asked.

On the contrary, I told the clerk that he had done it just right—doubtless he would pour out every drop of the stuff and have to make some more. What was too much was that it should be necessary. There was barely a sign of life at the moment, but very soon the floodgates would open and everyone would want their cup or two.

We grabbed ours and headed out to the island turnoff to watch the sunrise over the bay, due at 6:51. Let’s see, how does this work? Land heats up quicker than water so the air over it also heats up quicker so it rises which means air over the cooler water rushes in to take its place; in the summer there is always a cooling breeze from the water. Check. That was happening. There was a good stiff breeze. During winter the situation reverses.

Mike and his crew came along presently. I had thought he would. When vacationing in this part of Florida, which he does every year, he so dependably rousts himself to watch the sunrise that I assigned him the task last year of putting the blazing ball up, much as the custodian might be assigned the job of running up the flag each day. On cloudy days I would glance over his way at the timeshare pool and frown, as though to reproach him for not doing it right.

The egrets that had been flitting about settled in for the show.

Mike scrutinized the horizon and ventured that the upcoming sunrise would only be so-so, not so spectacular as yesterday’s. There were low clouds on the horizon, or maybe it was just a blanket of thick atmosphere viewed sideways. Better if it wasn’t there. There would be but a pink glow until the sun scaled over them, but the instant it did—just the tiniest peak of the orb was blinding. You wouldn’t look directly at it. Maybe your gaze would fall on its reflection coming straight at you over the waters. Brothers at the Kingdom Hall probably overuse it as a talk illustration, but it really is true that you never see a sunrise or setset and say: “god, that was ugly!” 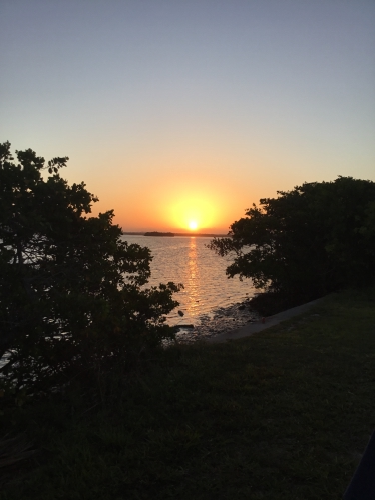 Job done, the disk launched, Mike and crew declared they would make their way to Ft Myers Beach pier—parking is free until 9 AM—and we decided to meet him there. Soon enough we spotted him and his wife chatting up whoever was at hand. Pelicans dived unpredictably for food. Dolphins rummaged about as well and you waited for them to break surface, which, as mammals, they must do. Manatees are rarely found this time of year, the grizzled and stocky old guy said to my wife. He hadn’t cut his hair in years, and his head was topped with a sailor’s hat, giving him the appearance of a jaunty old salt native, but it turned out that he was only ten years here after 30 in Illinois. It almost seems that you meet more out-of-state people than in-state.

As for the manatees, they gather around during winter months in the warm waters just outside a shoreside power station, but in the warmer months they are dispersed in the Gulf and all the way up to South Carolina—so said the transported Illinois man. “Everyone wants to go to heaven but nobody wants to die,” he added when commenting at how wildlife is greatly diminished from the past and it is no doubt due to overbuilding on account of the “almighty dollar.” The expression didn’t really make any sense as he applied it, but it came close enough that I knew where he was coming from. It was a refrain heard elsewhere—that wildlife was more plentiful just a few short years ago, and absolutely overwhelming a few decades ago.

Bright pastel colors form the motif for the area. Even the bridge to the mainland is colorful. Exactly how that came to be I do not know, but in Charleston the guide said it evolved so that drunken sailors could find their way back to quarters. 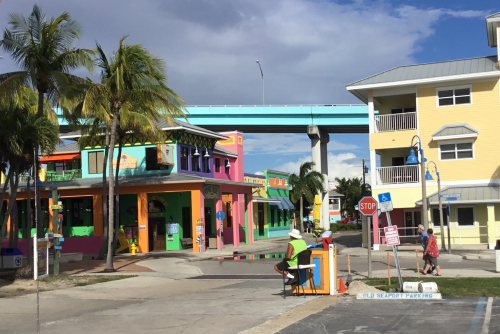 It is too early in the day to be concerned with sunscreen, and if you are not fair-skinned, you may forsake it even later. People are sauntering, walking, and even jogging along the shore, but the swimmers flitting between the water and the baking sand have not yet made their appearance. Later when they are in the water, dolphins and such will swim right past and even brush against them, unafraid of their presence. Pretty women in swimware, some outfits quite skimpy, will soon appear, too. Of course, I instantly blush and avert my eyes upon spotting one, but it is not easy because they are everywhere and you just turn away from one to see another.

If you are fair-skinned, you do not ignore sunscreen as the day heats up. Sometimes you will spy some newbie bright red as a lobster and it occurs to you to warn him, but you know it is already too late. Besides, there are some people who just will not learn, like Gary from years ago who the first week of camping would be cavorting shirtless in the blazing sun on the volleyball court and his wife would plead with him to put on a shirt—remember last year—and he would ignore her all day long. 24 hours later he would groan and almost cry in agony. “Never, never never again!” But the next year it would be just the same.

I swore that I would never return to this god-forsaken place after that sun broiled me years ago and furthermore that I would saw the state off at the Georgia line and shove it off into the sea, but I relented. It had sort of been my own fault. Our stay had only been three days, and sunscreen hadn’t been handy. Why buy some for just a few spritz’s. Staying in the shade would suffice. But the sun is a crafty devil and it is able to ricochet its rays off the sand and around corners to fry you no matter where you are. Family members own a time share in the area and the allure of an economical vacation is not easily resisted. But it hadn’t helped that on the return trip to reasonable-climated New York, when I just wanted to get home and the quicker the better, the connect flight to Rochester was canceled for some stupid reason and we had to wait for one to Syracuse, and from there catch some silly little puddle-jumper to Rochester. It wasn’t even large enough to run entry ramp to! We had to walk over the tarmac, just like barbarians, and climb the makeshift steps, assisted by a crew member who looked like Tarzan.

At day’s end, I crossed the road from the timeshare, walked the pathway, skirted the estuary to walk along the western gulf shore, and there Mike was again! hobnobbing with another chum—he’s been coming here forever and he knows everyone. He apprised me that sunset wouldn’t be much tonight, just as sunrise had not earlier on. It had turned heavily overcast and there was even occasional lightning way off in the other direction. I walked the shore, expecting no more than the dull pink that he had pointed to behind an oppressive layer of cloud. At the last moment, however, the disk broke free, just long enough to show its entirety before sinking into the sea. Half of you expects the sea to sizzle when it does that, but the other half finds you reminding yourself that it is really the same sun that broiled you just a few hours before. It’s power was clearly spent and you could gaze at it directly without strain. Carl Jung wrote about that once—how it is full of promise at the start, establishes its reign, but then begins its slow descent and ultimate disappearance—and he thought it was a good metaphor for individual life. 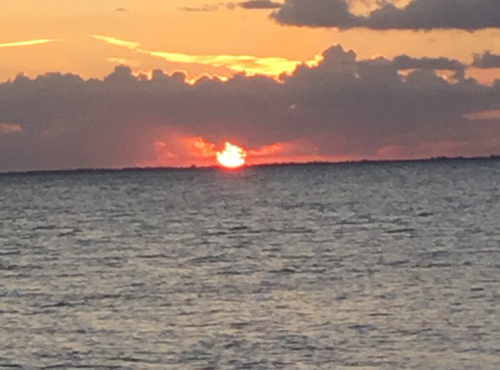 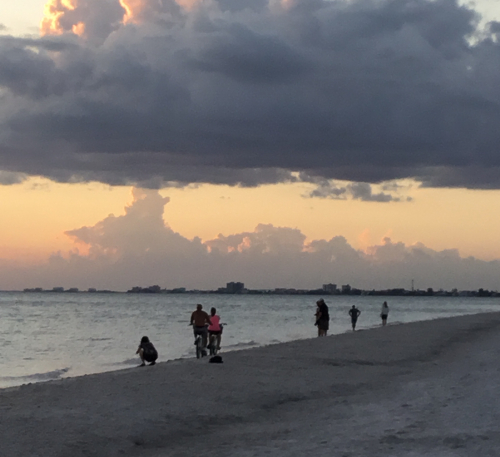