Home Archives Profile Subscribe
The New European Data Law as it Applies to Jehovah’s Witnesses - My Take
Q: My territory which is part of a large metro is uninterested and apathetic. Middle class suburbs that accomplished the American dream

Unified But Not Uniform - Critical of the Presentations?

Q: Tom, we need to follow the organisation with Jesus taking the lead, this is what we are a part of. We may think we know better but we do not.

It’s a good thing to be called on.

I have blogged long enough that it can be seen that I am an advocate for following the lead. Often the friends will get into some sort of a minor squabble over this or that, and I will say “Look, it is not that big of a deal—just do it” For example, saving seats at the convention or sitting for the music. Not saving seats has been the counsel for decades and many of the friends continue to save seats (beyond the parameters of what is allowed). So much so that the organization eventually gave up, and now lets the oldsters in ahead of anyone else so they can easily find convenient seats.

Or staying only at the recommended lodgings. That counsel is ignored so frequently that the brothers have at times found it difficult to negotiate rates. “What should I cut you a deal?” this or that manager will say, “when I know that you will stay with me anyway because it is convenient?”

(With regard to sitting in time for the start of the music, I had some fun with this in ‘Tom Irregardless and Me’ telling of a brother - it might have been Tom Oxgoad - who told everyone how one of the attendants carrying a ‘Please Be Seated’ sign was beaten up by a group of brothers determined to stand. This evil report spread throughout the circuit and even beyond, put eventually truth got its pants on and people discovered the source. Nobody batted an eye. “Oh. Well—you know Oxgoad—he says things like that.” The experience I just made up, but there was a brother who would say some of the loopiest things and the brothers just learned to roll with it.)

So I do understand the value of obedience. A favorite secular line of mine is from Nathanial Hawthorne’s The Scarlet Letter. “It is remarkable that persons who speculate the most boldly often conform with the most perfect quietude to the external regulations of society.” Nobody thinks thoughts more bold than Jehovah’s Witnesses, and nobody can conform (for the most part) with the external regulations of their society more than they.

But that doesn’t mean that everything that comes from the organization is a directive that must be applied, otherwise we are not following headship. These presentations are suggestions, not directives. Nobody says that one must use them. Sometimes we praise anything coming down the pipe as exactly the right blessing presented at exactly the right time, and then it is quietly discarded a short time afterwards and we never hear of it again. I think they are just putting up trial balloons—suggestions that some will find helpful—with the encouragement to try them out but no requirement that anyone do so. Please do not think I am critical of them. To take the “workmen” that are most of Jehovah’s Witnesses—most of whom once said that they would never ever ever preach—and to make them willing and effective preachers is an amazing accomplishment, for which the Bethel brothers deserve nothing but credit. Almost never do new ones initially have the gift of gab, or a way with words, such as I now have but once did not, and they have molded them into ‘Jehovah’s army!’ It’s incredible.

I didn’t say that the suggested presentations are no good, much less that they are wrong. I said that I do not like most of them. I gave my reason—that they do not work for me. I gave my reason for being so bold (admittedly, I have been) as to put it out here on the forum—that I see many having difficulty implementing them. That’s is not to say that anyone who wants to should not work with them. For some persons, and in some circumstances, they will work very well indeed.

The Bethel brothers have taken on an extremely difficult assignment, and I try to be nothing of supportive of them. It is very difficult to find just the right mix in leading a large group of people. One person will say, “Thanks for the new RULE!” and his companion will say “Huh—did you say something?” I think that the Bethel brothers do not want to find themselves in the position of Lot, whose sons-in-law thought he was joking. On the other hand, from time to time they remind us: “Not that we are the masters over your faith, but we are fellow workers for your joy.” (1 Corinthians 1:24) They are not our masters and do not want to be thought of that way. They want us to be united, but not uniform It is the greater world that stuffs people into uniforms and sends them off to put their lives on the line over this cause or that. 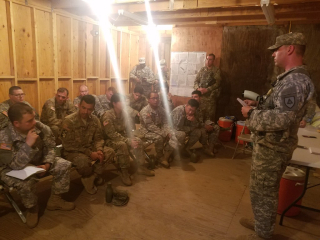