I could be in serious trouble. They just finished remodeling the Kingdom Hall, and there are two quarter walls, one left of stage and one right. Gulp. Will the brother start entering and exiting the platform via those quarter walls, just like I saw them do in the other congregation?

The circuit overseer was visiting, so I started pumping him on it. “‘Don’t let the brothers walk behind the quarter wall to go on-stage,” I told him. I was not too insistent—one mustn’t overdo it on these things. I mean, I don’t want to be the brother who meets him in the parking lot to tell him that all the brothers are no good, and they aren’t loving at all, and they are deadwood in the ministry, and come to think of it, they don’t even like God, and so he, the circuit overseer, has a lot of work to do here, and he says “Yeah, I think I’ve found the problem already.”

I did about as much as I could. He seemed to be sympathetic. “Yeah, I know,” he said. “You see them, then you don’t as they walk behind the wall, and then you do as they emerge from the other side—it IS a little funny.” So I gave it a good try. But he was just biding his time to get away from me, I suspect. He is not going to do anything at all, I don’t think, other than tell the brothers to go on the platform any way they like when it is their turn to speak. What does he care how they do it? It doesn’t bother HIM one way of the other. It’s ME it’s driving nuts, and then he will say “Well, you were mostly there already.”

I have always tried to stack the deck. Those elders way back in the day would have a meeting coming up and I would pump various ones separately over a multitude of picayune things, so that one of them said at their meeting (as I was told later) “Wait a minute. Who’s running this congregation? You, me, or Tom Harley?”

But then, visiting another Kingdom Hall, I saw something that got me going even more, if that is possible. I saw, yes—I witnessed it while visiting another congregation, brothers clapping after each and every exchange that took place up front, whether live or on video, just the way I had heard someone complaining about before, and I thought he was making it up. Suddenly he becomes as a prophet from on high. That too, drove me nuts!—all that clapping. You don’t clap over every single skit of one sister offering a tract to another, who, of course accepts it a just little too eagerly, it seems to me, from what I recall in the actual ministry. You clap spontaneously when something really knocks your socks off. You clap when a child or even anyone gives his or her first talk in the school. You clap when the spirit genuinely moves you, for anything. You clap after the public talk, even giving the speaker the benefit of the doubt if it wasn’t that—um—good. But you don’t clap for every minor exchange of trivial words! It only cheapens the times that there really is something to clap for.

I know where this comes from, just like I know where walking behind the quarter walls came from. Some pious brother doubtless wanted to “show appreciation” for everything under the sun and so started up the habit, thinking he was setting a ‘good example’ and that others would follow, and those others, not wanting to seem unappreciative, did follow, even some half-heartedly.

However, it is possible that it is not the pious brother at all who is responsible, but rather the one who is too swayed by the new-agey mantra that you have to lavish praise on children non-stop just for showing up, because you will crush their self-esteem if you don’t do it, and so the brothers clap if another so much as clears his throat. I mean, don’t go pinning this one on “theocracy,”—it could just as well be that trendy “world” that he is so enamored with.

This will not the easiest habit to break. I mean, you can hardly sit there and scowl, so as to provide the counter-example. The best strategy is just to contain it, as you might strive to do with a measles outbreak. Don’t send speakers to that congregation for awhile, until the illness passes. I doubt I can even enlist the circuit overseer in any serious capacity on this one. He will probably just roll his eyes when I meet him about it in the parking lot. C’mon, DO IT RIGHT, BROTHERS!

This will not readily yield to change, if history is any guide. About the best I can hope for is some circuit overseer acting similarly as he did with another “crisis.” During a transitional lull from one main point to another, he will say that the expression “Now let us turn the platform over to the next speaker” is not optimal because it evokes an image of turning the platform over. With that, I eventually heard the expression less, though it still pops up from time to time.

It is not easy to correct anyone on anything, especially on a triviality, though occasionally people jump instantly on the trivialities but ignore the things of substance. Finding the right degree of emphasis is tough. One recipient will say “Thanks for the new RULE!” and his companion will say “Huh? Did you say something.”

There was a certain sister ages ago who enjoyed explaining things to others and eventually left the truth because not enough people listened to her. She had even begun to partake of the emblems. “What the Society is trying to tell us is....” she would often employ as a preamble. She is the inspiration (in this one regard only) for John Wheatandweeds, from my book ‘Tom Irregardless and Me,’ who will not let the brothers go in field service in the morning because he insists as the conductor of rattling on and on about the day’s text, and he resists counsel  to shorten that part—eventually to as little as 7 minutes— and he talks at such length, drawing out comments, that eventually nobody is in the mood to go out anymore. “What the Society is trying to tell us...” he responds to every bit of counsel on the subject. Finally, the Society interrupts him mid-sentence to say “We’re not trying to tell you anything—we’re telling you,” after which he finally obliges by getting everyone out the door in reasonably short order—not seven minutes, but neither seven years—however he makes up for it by chatting away in the parking lot. 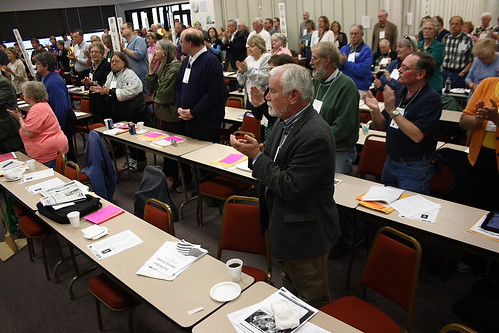