Home Archives Profile Subscribe
“You Can Check Out Any Time You Like - But You Can Never Leave”
Why Isn’t THAT in Your Museum, National Historic Park Service - Eisenhower’s Mom

At the Hershey Chocolate Story Museum

“Trouble ensues” when Milton’s father appears on the scene, but that trouble is only hinted at, even though it caused the son’s bankruptcy. No matter. Through “hard work” he got on his feet again to find success. He did not build his factory near his birthplace because Lancaster doubled his taxes after he declined to support a local politician. No. He moved so as to be close to his neighbors—industrious workers, and the farmers who would supply his burgeoning chocolate factory with fresh wholesome milk, along with the railroads.

All exhibits will feature nothing but praise of Milton Hershey—almost always called ‘Mr. Hershey.’ “I have always worked hard, lived rather simply, and tried to give every man a square deal,” [1938] is about as controversial as it gets at the museum. “I am trying to build a place where people can live in pleasant surroundings,” is another shocker. [1927] A teenaged docent seemed surprised that there could be any bad things to say. “He built this beautiful town that I live in,” she explained. Hershey, Pennsylvania, is billed as “the sweetest place on earth” and the street lights are in the shape of Hershey Kisses. Eight million of the chocolate Kisses are made each day. 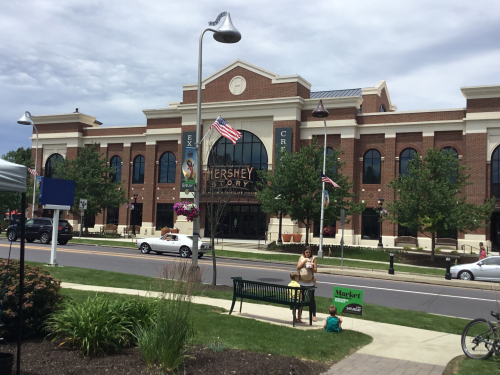 Perhaps there are no bad things to say and even modern pundits would abandon the search to find some. A headline of November 9, 1923, tells that he transferred his entire then-wealth of $60,000,000 to an orphanage he’d established years earlier, and managed to keep the deed hidden for five years. It is the highest-profile example that comes to mind of Jesus’ words—“When you make gifts of mercy, do not blow a trumpet ahead of you, as the hypocrites do in the synagogues and in the streets, so that they may be glorified by men....[Instead], do not let your left hand know what your right hand is doing,  so that your gifts of mercy may be in secret. Then your Father who looks on in secret will repay you.” 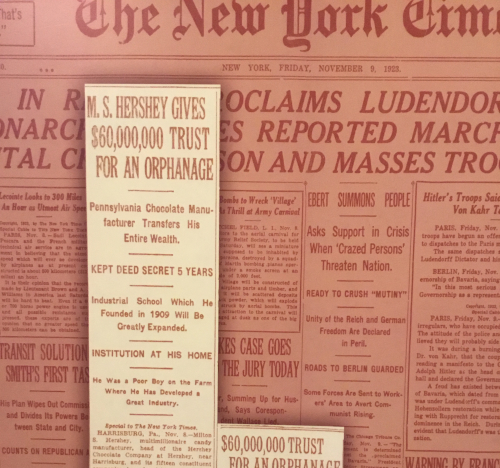 He is the founder of a company town, with housing that workers were encouraged to own. He was energetic in providing for cultural resources, parks, and education. Placard after placard informs that: “Mr Hershey knew that workers needed....” and one may gaze about the city and see that whatever thing they needed was planted in seedling form and is now a massive forest seemingly employing all the teenagers in the region—no wonder they like him. “But if you want to see Mr. Hershey’s extraordinary legacy, step outside and look around you,” says a poster. Schools, an amusement park, a zoo [ZooAmerica, which I took at first to mean that it was huge, but it actually means that it is a “rescue zoo” and all animals are native to America], sports arenas, floral gardens and an arboretum. 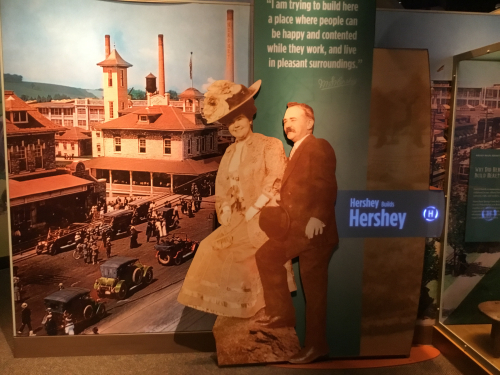 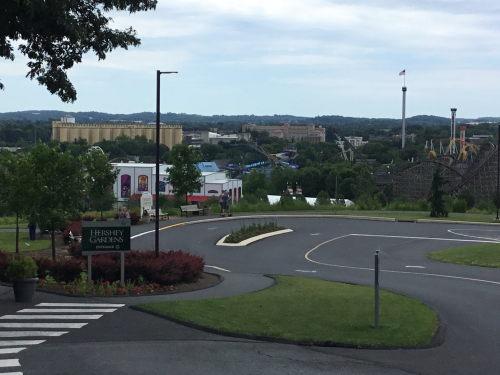 In fact, he is the founder of two such towns, for there was also a Hershey, Cuba (sugar cane source during WWI, when it became scarce) that was sold in 1946, 14 years before communism could confiscate it.

“To reduce unemployment [during the Great Depression] in his Pennsylvania town, Mr. Hershey embarked on a ten year “Great Building Program.” Amenities such as Hotel Hershey [it is the building to the background of the next picture], Hershey Stadium, and Hershey Theatre were constructed,” says one placard. “My workers are not my partners, so they don’t have to share my loss,” he explains in another. Another placard explains that he donated $20,000 apiece to the area churches to stay them through the hard times. 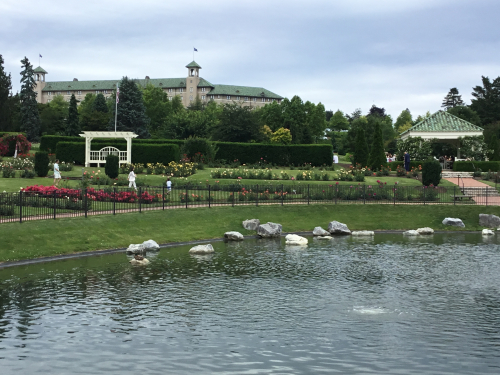 Still, labor unions were gathering steam during those tough years. Though there were no layoffs, there were shrinking paychecks. 400 workers staged a sit-down strike in 1937. After 5 days, local farmers and workers not disgruntled stormed the factory and beat them. Wikipedia attributes some of the tension to the nationality differences of supervisors and workers. 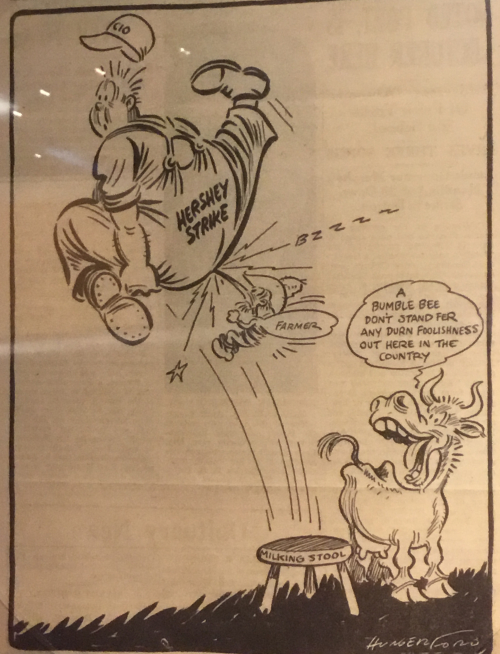 Milton meets his bride to be in Jamestown NY and his animated eyes take the shape of hearts that bulge outwards. But within a few posters, we read the couple is touring the world in futile search for her incurable illness, and then that he is a widow after just 17 years of marriage. Just what her illness was is unknown to this day, another placard down the row briefly states.

Only at the rose garden he planted for her—now expanded to 23 acres—did my wife discover that her unknown illness was one causing slow paralysis and that, unable to sense cold or heat, she had told the chauffeur to drive fast so as to feel the wind in her face. It was cold March wind and she died of pneumonia. 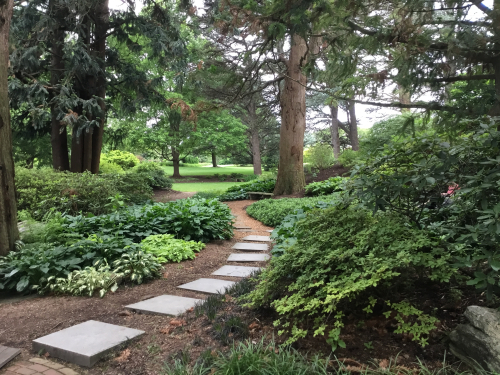 At the museum, the teenaged guides have little to do other than stand around and look friendly, and one of them was completely immersed in her smart phone—always a major temptation. Nothing is free at Hersheyworld, another teenaged attendant told us, but there is a single exception—the ChocoWorld tour that loads people into cocoa-bean cars and rides them through a simulated factory. Hershey recoups the funds, probably, because the ride empties out onto the largest retail candy shop (with gift shop) that I have ever seen, not to mention the huge amusement park just outside. The queue on top is for the ChocoWorld tour. Most visitors probably saw the town in reverse order than did we and many would never even have gotten around to the museum. 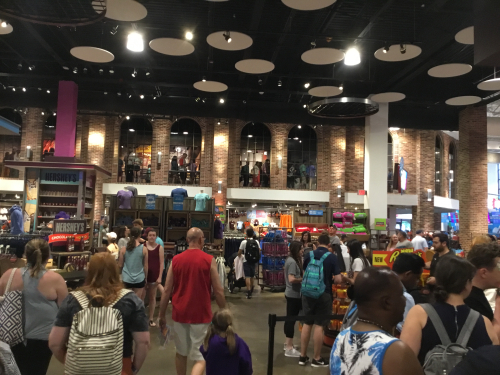 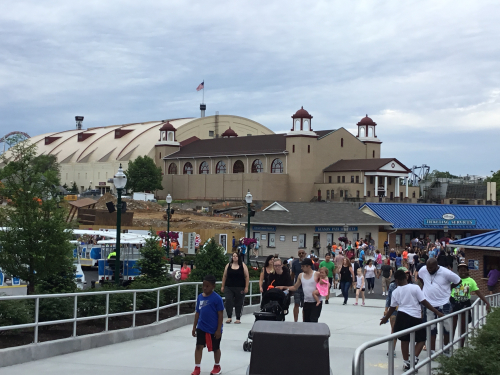 But the ones that started with the museum, like we did, might even get around to visiting the Wilbur Chocolate store, in nearby Lilitz—it is not as though Milton was the only candy maker of this time. We bought a package of ‘Wilbur Buds,’ essentially ‘Hershey Kisses’ minus any patent infringement, and they tasted just as good. The defunct Wilbur chocolate factory is just across the street and is now being converted to upscale lofts and restaurants, and entire town is dubbed one of the coolest small towns around. It is a designation that is not especially hard to come by. It is marketing, mostly. Still, a fuddy-daddy town will not get one.

Trust Wikipedia to tell the bad news that will not be read at the museum:

“In September 2006, ABC News reported that several Hershey chocolate products were reformulated to replace cocoa butter with vegetable oil as an emulsifier. According to the company, this change was made to reduce the costs of producing the products instead of raising their prices or decreasing the sizes. Some consumers complained that the taste was different, but the company stated that in the company-sponsored blind taste tests, about half of consumers preferred the new versions. As the new versions no longer met the FDA’s official definition of "milk chocolate", the changed items were relabeled from stating they were "milk chocolate" and "made with chocolate" to "chocolate candy" and "chocolaty." [I thought the taste was different, but it is very subtle and might be my imagination.]

However, Wikipedia also reports some good news: “A 2016 attempt to sell Hershey to Mondelez International was scuttled because of objections by the Hershey Trust.”

Good. A new monster buyer would come in with efficiency spreadsheets and productivity software. They would search out that teen engrossed in her smartphone and fire her. Somehow the museum needs her.