Home Archives Profile Subscribe
Skirmish #50017: “I see that you not supporting this [dumbing down] trend in Organization, but that is how it is
”Tasting” Apostasy - ‘Yeah, I’ll Have Me Some of That!’

The fellow was in a rush when I first contacted him, just about to leave to pick up the kids from school. He was apologetic about it, very nice, and allowed that I should visit some other time. When I did I told him it was to show a video that lasted exactly a minute (actually a minute and six seconds—I lied).

He said we should go into the darkened garage where a video would be easier to see. It is the short video ‘Would You Like Good News?’ and it points to a brochure of similar name. That brochure’s table of contents lists about a dozen questions people have raised about God. ‘Ask if there are any that grab their interest,’ the C.O. had suggested. If there are, there is a basis for short conversation. If there are not, off you go, nice as you please. I even thank them for their time. After all, people are busy, we call without appointment, which is pretty much unheard of today, and there is no obligation for them to speak with us at all. The fact that a given person does is reason to thank them for their time, in my view.

‘That says it all as to what we do,’ I told the fellow after the video. My instincts had not been wrong that here was a decent guy with an interest in spiritual things. “How people can not believe in God?—all you have to do is look around,” he had said unbidden. I even tried to stick up for “those people” with the observation that a lot of bad things happen today and some feel that if there is a God, surely he would have fixed them. He didn’t buy it.

Your building is right up there on route such-and-such, he said. But I told him that we had sold that one, and I gave him the party line—it was because of our great growth—(whereas if anyone else had done it, it would mean they are going belly-up). Well—it can be spun that way and so I do. The Halls aren’t all where they should be, so if you combine some groups here, you can sell off an underutilized one there and build one where you need it. This especially works when the ones needed are in developing lands. One underperforming dud of a Hall here can finance 100 over there—aiding ones who could ill afford it on their own—a significant advantage of organization.

It’s all valid to explain it that way. It works. It’s true enough. Having said that, that was not the intent when the Hall was built in the first place. The intent was to fill it to the rafters. Ah, well. With admittedly some hyperbole, Witnesses can put up and dispose of Kingdom Halls as readily as the greater world puts up and disposes of Coleman tents—they are very handy people—so it makes sense to do it this way. The arrangement that I thought could never be improved upon has been significantly improved upon—streamlined for overall efficiency—again, something that shows the advantage of organization.

This guy lives way out there, where I don’t get too often. It’s why I like the website, and specifically the online series of Bible study courses. They are self-guided, I explained, and you can take a day or a year to go through them all, building a foundation of basic Bible knowledge. In fact, I am looking forward to saying—the timing and circumstances will have to be just right—I would never do it with this fellow: “I don’t want to study the Bible with you. Do it yourself!” You don’t have to spoon-feed everyone elementary verse by elementary verse. People are smart. They can do it themselves, in most cases. I even think that keeps some of us babes ourselves—if we eternally are striving to present the basics. 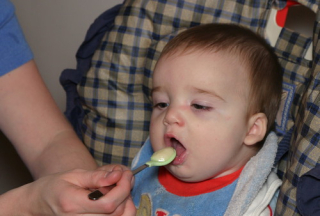